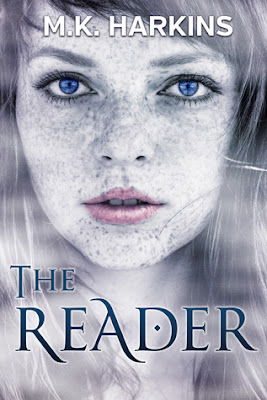 Hunted, shot, and without her memory, eighteen-year-old Ann Baker wakes in shallow water on a deserted Pacific Northwest island. She is soon approached by two young men claiming to be her friends. Something isn’t right, but when gunshots sound, Ann is left with little choice but to allow Devon and Archer to help her escape. Soon she finds herself in their North Bend mountain compound, where the higher evolved humans claim to be mind-readers. While Ann heals, she realizes they believe her to be one of the last and most powerful of all – The Lost One.

She’s welcomed by most with opened arms, but not everyone is happy about her arrival. A jealous adversary has plans for Ann, which spirals the entire Reader community into chaos.

As lies, murder, and betrayal threaten to rip apart the once harmonious mountain dwellers, Ann is thrust into making a decision that could save or devastate not only The Readers, but all of mankind. But there’s just one glitch: by doing so it may require her to make the ultimate sacrifice.

The Reader by M.K. Harkins is a deeply engaging paranormal tale that was full of intrigue, action and just enough romance to keep me eagerly reading along.

When eighteen year old Ann Baker wakes up alone in shallow waters on a deserted beach, she has no memory of who she is and how she managed to get herself shot and stranded without any recollection of what happened. Approached by two mysterious strangers who say they want to help her, Ann has no choice but to put her trust in Devon and Archer when someone opens fire on the trio and they’re forced to flee. Taken deep into a mountainous compound, Ann finds herself drawn to both Archer who is kind and friendly and Devon who acts like a jerk but makes Ann’s heart race. Discovering a group of individuals who claim to be a special form of evolved humans able to read minds, Ann discovers that not only is she one of them, but potentially someone long ago prophesied to arrive. But with someone still after her and her memory still missing, will Ann be able to trust her new friends? Or is the threat to her closer than she realises…..

Diving straight into The Reader, I found the story to be an easily enjoyable tale. It featured an interesting plotline, some great backstory and the perfect amount of romance and character chemistry to keep me satisfied. Plus, it’s a standalone tale that author M.K. Harkins perfectly wraps up!

I really like the concept Harkins introduces readers to in The Reader. The idea is that there are three races of people, the Readers, the Seers and the Highjackers---known as Jacks. The Readers are able to read the minds of those around them, the Seers—who have long been wiped out, were able to predict the future, and the Highjackers are able to highjack the minds of others and take possession of their bodies.

The Reader is told through the eyes of our heroine Ann whose voice is strong and easy to follow. I quite liked Ann. I thought she was kind, but strong and easy to like. Ann has lost her memory, but her personality shines through as the story progresses and she begins to discover just exactly who and what she is.

Harkins adds a little bit of a love triangle to The Reader, but for once I wasn’t overly concerned about it. It’s fairly evident who Ann was going to end up with romance wise from early on. Archer clearly liked her but there was no denying her connection to Devon. Personally I really enjoyed their connection and loved seeing them interact, although I think their being "in love" was a little too swift. They definitely had the connection and the attraction, I just think being in love came too fast for them.

The Reader is a fast paced story that is well told and well executed. There’s storyline developments and a betrayal you won’t see coming. Though this is a standalone tale, I’d love the opportunity to discover more of the world M.K. Harkins has introduced and would love a companion novel if the chance ever arose. At the same time however, I think Harkins wrapped up the novel well and definitely recommend it to those looking for an easy to read paranormal/fantasy tale!