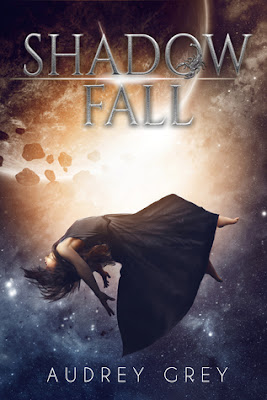 The asteroid hurtling toward the earth will kill billions.

The Emperor and his Gold Court will be safe in their space station, watching from the stars. The Silvers will be protected underground. But the Bronzes must fight it out at the Shadow Trials for the few remaining spots left on the space station.

When an enigmatic benefactor hands Maia Graystone a spot in the Trials, she won’t just get a chance at salvation for her and her baby brother, Max: She gets to confront the mother who abandoned her in prison, the mad Emperor who murdered her father, and the Gold prince who once loved her. But it’s the dark bastard prince she’s partnered with that will make her question everything, including her own heart. With the asteroid racing closer every day, Maia must trust someone to survive.

The question is who?

Audrey Grey’s debut novel Shadow Fall is a dangerously alluring dystopian tale that mixes elements of sci-fi, fantasy and plenty of danger with romance, action and edge of your seat suspense and deception.

Maia Greystone lives in world where the majority of society lives on borrowed time--a massive asteroid is hurtling towards Earth and those unlucky enough not to be a part of the Emperor’s Gold Court won’t be granted a seat on their space station when it finally makes contact. A lowly Bronze, Maia is the daughter of a traitor and someone who knows her place in life, locked in society’s most dangerous prison, the pit. Until a mysterious man offers Maia a chance to participate in the Trials and possibly win a highly coveted seat on the space station for her and her brother. Agreeing, Maia finds herself being altered and taking on a new appearance to take part in the trials, but with all the dangers clear as day, is the biggest danger to Maia falling for her fellow pit survivor Riser, a disturbing dark horse who is beginning to make Maia feel for the first time in years…..

Having caught my attention with its absolutely stunning cover, I can honestly say I highly enjoyed Shadow Fall. I know there are a lot of people who have compared it to The Hunger Games, and yes, I guess I can see that a bit of THG in Shadow Fall, especially in the second part of the book, but Shadow Fall also has its very own unique storyline. Audrey Grey introduces her readers to a very dangerous, destroyed world that I loved, with tangible characters who felt well fleshed out and who were insanely likable.

Featuring an Earth set to be destroyed by an asteroid, there’s an edge of desperation and hopelessness that encompasses the people of Shadow Fall. The dark, gritty aspects of Shadow Fall really appealed to me and I liked seeing two different classes of society mingle—the haves and have nots. The class structure and society within Shadow Fall was interesting to me and I liked the intricacy of it, even if the various groups of individuals confused me at times. I found it difficult to wrap my head around all the different rebel groups, but for the most part I was able to follow the storyline without getting too confused.

Heroine Maia was one of those main characters that starts out in a weakened state and in a hopeless situation and continually grows. She’s in a no-win situation unless she manages to successfully complete the trials and she fights for that. Personally, I quite liked her. I thought she was a well-balanced main character who has growth possibilities, but also manages to be a strong personality and individual when we meet her. Basically I’m very happy to follow her throughout Shadow Fall.

I found I really loved the characters that dotted Shadow Fall. Everyone from Maia, Flame, Caspian, Merida, Rhydian and especially Riser really struck a cord with me. They were tangible and full of personality and really brought the story to life. I’m absolutely addicted to Riser—he is such a surprising contradiction and I’m a real fan of his. Cheeky but darkly scarred, Riser is someone who lures you in and makes you want to know every secret he has.

Author Audrey Grey writes some wonderful chemistry between Maia and Riser and I thought they were perfect together. I’m definitely going to be on Team Riser, even if I am suspicious of a love triangle appearing within the series. Yet that being said, strangely enough I also really liked Caspian who is the second possible love interest for Maia. I’m going to keep my fingers crossed Maia’s heart and affections remain squarely in Risers hands, but only time will tell....

The last few chapters of Shadow Fall are especially action packed with developments and revelations that set the stage for the next novel. Audrey Grey leaves her readers at a highly climactic moment and guarantee’s you’ll be dying for the next book’s release to discover what is in store for Maia next! Highly recommend if you love fast paced and well developed dystopians!

Source: Sent for review by publisher via Netgelley (Thank you guys!)
Publisher: Blaze Publishing
Format: Kindle ebook via Netgalley
Release Date: November 22nd 2016
Purchase: The Book Depository | Amazon | Barnes & Noble | Kobo
Final Thoughts: This book entranced me from beginning to end and left me raring for the next installment!