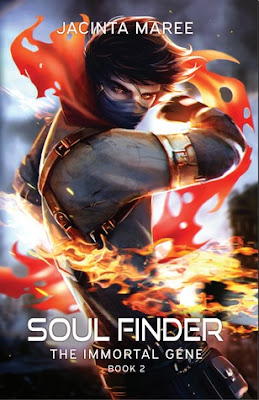 Since being discovered as Soulless, Nadia has become a target for both terrorist groups and government corporations. Now, her only hope for survival rests in the hands of the man sent out to kill her: Diesel, the Mad Dog terrorist.

Diesel is determined to free himself of the never ending curse of reincarnation and the haunting memories that plague his mind. But when his search leads him to Nadia, a greater desire stills him from taking her life.

Unable to see into Diesel's cracking mind, Nadia instead puts her faith into his strength, fueled by eleven generations of unmatched rage and insanity. Their tight-rope relationship balances the two between life and death, love and rage, trust and betrayal.

Tension pulls at the hems of their dangerous companionship, and as time runs out all madmen must eventually make their choice.

Book two of the thrilling Immortal Gene series dives deeper into the danger of trusting your heart over your head.

Readers discretion: Adult language, violence and some adult scenes. For mature audiences only.

Having been discovered as Soulless, Nadia has found herself wanted, hunted and sort out by various organisations who want to study her or take advantage of her lack of a soul imprint. Torn between putting her trust in Diesel, the fractured and often frightening individual who ignites her blood, and her own insecurities, Nadia must decide whether she can place her faith in Diesel even as he continues to struggle under generations of insanity. In a world where madness inhabits the minds of almost everyone in existence, Nadia and Diesel must battle for sanity, love and trust but as they fight to discover a cure for the insanity that plagues their world, will Nadia be able to trust the most important person in her life, or will Diesel’s past destroy their future?

The first novel in this series, Soulless has been one of my favourite books of this year and I was happy to discover that I seemed to enjoy Soul Finder equally as much. There’s something so raw and gritty about this post-apocalyptic trilogy that author Jacinta Maree details so well and in the vein of all the great dystopian tales out there.

Through Soul Finder Jacinta Maree explores new branches of her dystopian world not previously touched on in the first novel. Having made a daring escape at the end of the last novel, Nadia finds herself outside her normal city limits and we as the reader discover more about the outer areas surrounding the city where Drifters are aplenty and poachers linger. And then later on Maree takes us briefly into the heart of the place the Elites call home, highlighting the differences those of wealth experience in the Immortal Gene world.

Wonderfully written, Soul Finder continues to follow a strong protagonist in Nadia. Nadia has been through a lot already, and has to make some tough choices in Soul Finder. Nadia does things she never expected herself capable of in her fight to survive, but continues to remain a character that is easy to get behind, like and root for.

Maree continues to shape the series well; introducing new characters and allowing us to follow previous ones. I’m intrigued to see Hiro’s continued presence in the trilogy and what it will all mean in the end, as well as Jacky and Logan who were interesting additions also. But you know what? As insane as it may appear to some, my favourite part of the trilogy is and remains, for no logical reason, Diesel…..

I just love Diesel. He’s one of those characters that will draw every emotion possible from you at some point or another during your reading experience. From one extreme to the next, Diesel is a complex puzzle of an individual with more personality than seems possible. He’s psychotic and he’s rash, he’s unforgiving and he’s cruel, he’s brutal and he’s fierce but ohmygoodness does he care for Nadia. And that really is his saving grace at times.

As the story unfolds, Jacinta Maree makes it clear that Nadia and Diesel really aren’t a healthy couple in most senses. Diesel is a fractured, struggling human being whose tendencies lean towards violence, cruelty and selfishness, but when he is with Nadia, the best in Diesel shines through. And he does genuinely want to be good for her. Diesel isn’t a bad soul deep down and he does have the ability to show kindness and understand
empathy, but all his past lives and their personalities have led him down a path towards madness. Nadia cares for him in a way I think he needs and with Nadia needing someone to pick her up at times and stand by her in this unforgiving world, Diesel may just stand a chance at redemption and happiness if he lets himself love her as it's clearly evident he does.

A sequel well worth a read, Soul Finder packed a lot of excitement and development into its pages and leaves me eagerly anticipating the third and final book in the trilogy, Soul Reaper, to discover how Jacinta Maree plans to conclude this spectacular series!