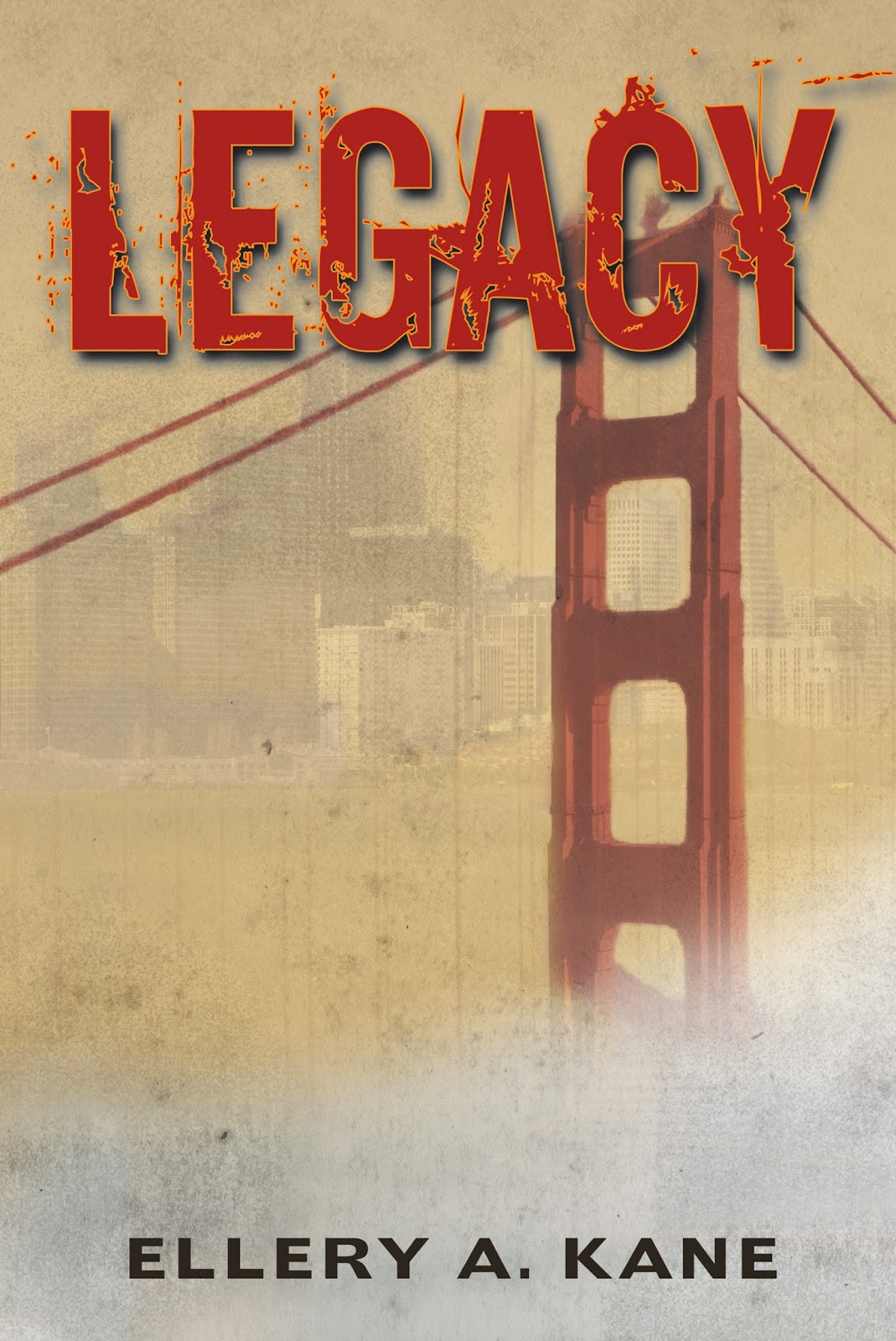 Legacy by Ellery A. Kane was a well paced and well thought out novel that surprised me with it's exciting storyline and tangible characters. Set in an alternate future where drugs can alter your emotions and military forces control society to an extent, Legacy was a wonderful debut!

Following eighteen year old Alexandra "Lex" Knightly, Legacy is set in the alternate future of 2041 where society is a shadow of it's former self and pharmaceutical companies produce drugs that suppress fear and uncertainty, working together with military forces known as Guardians to create super soldiers incapable of feeling fear and disobeying orders. As the daughter of the forensic psychiatrist who first came up with the emotion altering drug known as Emovere, Lex finds herself entering the deserted city of San Francisco to meet up with a group known as the Resistance in order to potentially take down the Guardians and bring to light the truth about Emovere and its devastating side affects.

Heading into Legacy, I wasn't completely sure what I should expect. The description sounded promising, but if I'm honest the cover didn't go a long way to fuelling my imagination. Still I was hopeful. And I'm thrilled to say Legacy encompasses the saying that you shouldn't judge a book by it's over. Ellery A. Kane's debut novel was a very exciting story that has obviously been very well thought out and constructed.

I quite liked Lex as the main character and have to commend Kane on writing a heroine easy to like and follow. Lex takes on a hard task when she risks entering San Fransisco to find the Resistance and even though she is untrained and afraid, she faces her fears knowing that she has the potential to save lives.

All the characters we meet throughout the story compliment the plot line beautifully. I enjoyed seeing Lex make friends with some ex-Guardians and see Kane explore the damages harsh childhoods and painful pasts have had on the individuals treated with Emovere.

I was very satisfied with Lex and her relationship with Quin McAllister, the tough and fractured former Guardian who helps her throughout the story and quickly wins her heart. While admittedly I felt Lex and Quin "fell in love" too soon, I did believe their feelings and their romance. By the end of the book it was no surprising at all that they felt so deeply about each other after all they had been through but I would have liked a slower process of them getting there. Quin had some very real demons he needed to face and I appreciated Ellery A. Kane forcing him to face hard truths and growth requirements in Lecacy.

My only issue with this story is that I would have liked to explore the world within Legacy just a little bit more. I'm very intrigued to see exactly how society got to be the way it is in 2041 and can only hope Kane expands on this some more should she write a sequel and continue on with the series.

Legacy concludes very well, with Lex and her friends taking on powerful individuals to bring to light the truth about what is going on, and in saying that Legacy could very easily be a stand alone novel. And yet, despite how well it concludes, I do hope Ellery A. Kane writes a sequel as I wouldn't mind the chance to see and learn a bit more about this world and about these characters.

Source: Sent for review by the author (Thank you Ellery!)
Format: Paperback
Buy it: Bookworld | The Nile | The Book Depository | Amazon | Barnes & Noble | Kobo
My Recommendation: If you enjoy stories like Article 5 by Kristen Simmons or Disruption by Jessica Shirvington then you'll enjoy Legacy!
Cover: The cover doesn't do the story justice really.
Will I read sequel/continue with series: I hope this isn't the last book because I want to read more.....