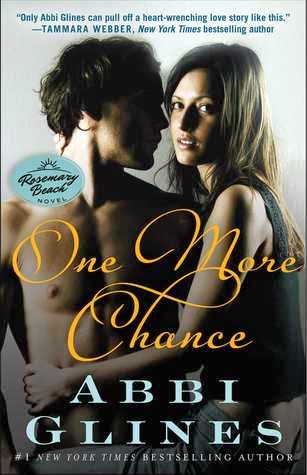 Grant Carter did everything in his power to convince Harlow Manning that he was a good guy. More than a smooth-talker and someone she could trust. He had to overcome his reputation as a playboy, and his history with Harlow's half-sister, Nan, a woman with a reputation of her own.

Harlow had taken the chance, falling hard and fast for the guy who thrilled her with his all-consuming desire. After a lifetime of avoiding bad boys like Grant, she had opened herself to the possibilities of love...

But a life-changing secret has torn them apart, and now Grant and Harlow must decide if they have enough fight to make it work - or if the pain of betrayal has permanently destroyed their future.

One More Chance is the emotional conclusion to Grant and Harlow’s two part story and proves to be another sizzling and at times heart warming tale by Abbi Glines!

Picking up almost two months where the last book left off, One More Chance continues to tell Grant and Harlow’s story now that Grant has been made aware of Harlow’s condition. With an unexpected development putting Harlow’s life in even more danger, Grant and Harlow face their toughest fight ever if they hope to have any kind of future together.

Abbi Glines weaves Grant and Harlow’s sensual romance together with plenty of endearing moments of friendship, love and sweet, tender moments in One More Chance. Personally I really love the way Abbi Glines writes her stories but I was quite delighted to find that One More Chance featured less romantic drama than normally included in a Glines novel.

Now, don’t get me wrong—I enjoy the delicious, almost teenage drama that seems to fill these kinds of novels but I appreciated the lack of cheating, insecurity, pain and constant breakups and reconciliations that seem to be at the center of most NA novels. It was refreshing to see two people face a different kind of obstacle and see nothing but love and commitment shared and expressed by them.

Grant and Harlow have come such a long way, and as I previously mentioned are so very sweet and tender towards each other in this novel. As expected with the previous book’s ending, Grant and Harlow do face getting back together in this book and reconciling, but it was nice to see how devoted and sure of their love for one another they were in this book.

Glines continues to write her trademark sexy and sensual moments, and Grant and Harlow current situation do nothing to dampen their desire for one another, if anything Harlow is like Blaire and they’re more addicted to each other physically than ever.

There are some very cute moments in this novel as well as a few surprises. Case in point; if ever a book showcased the possibility that there may be redemption possible for Nanette it's Once More Chance. I may face losing friends over saying this statement, but I’m ready…..ready to fall in love with Nan. She’s been the villain in the series for so long that I think it’s time Abbi Glines writes a different side to Nan. It may quite possibly be the hardest book Glines ever writes but I’m really excited about the prospect of seeing Nan get a HEA and seeing someone manage to see the good inside her and win her heart. I'd even go so far as to say Major?

Source: Sent for review by Simon & Schuster (Thank you Jen!)
Format: Paperback
Buy it: Bookworld | The Nile | The Book Depository | Amazon
My Recommendation: A MUST READ for Glines fans.
Cover: Fits perfectly with the first book.
Will I read sequel/continue with series: YES! I'll without a doubt read whatever Abbi Glines writes.....