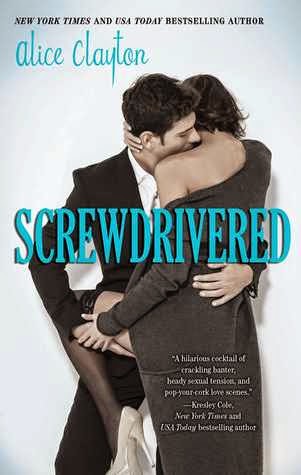 Readers back for a third round of the bestselling Cocktail series will enjoy a madcap romantic comedy about bodice ripping and chest heaving, fiery passion and love everlasting. Plus a dash of paperwork filing and horseshi—wait, what?

By day, Viv Franklin designs software programs. By night, Vivian’s a secret romance-novel junkie who longs for a knight in shining armor, or a cowboy on a wild stallion, or a strapping firefighter to sweep her off her feet. And she gets to wear the bodice—don’t forget the bodice.

When a phone call brings news that she’s inherited a beautiful old home in Mendocino, California from a long-forgotten aunt, she moves her entire life across the country to embark on what she sees as a great, romance-novel-worthy adventure. But romance novels always have a twist, don’t they?

There’s a cowboy, one that ignites her loins. Because Cowboy Hank is totally loin-ignition worthy. But there’s also a librarian, Clark Barrow. And he calls her Vivian. Can tweed jackets and elbow patches compete with chaps and spurs? You bet your sweet cow pie.

In Screwdrivered, Alice Clayton pits Superman against Clark in a hilarious and hot battle that delights a swooning Viv/Vivian.

Also within this book, an answer to the question of the ages: Why ride a cowboy when you can ride a librarian?

Screwdrivered is the saucy third installment in Alice Clayton’s Cocktail series and is another sassy story that, while featuring an new main character in the form of Vivian, Simon’s high school buddy we previously met in Rusty Nailed, features all the wit, sass and laughs typical of an Alice Clayton novel!

Told through the eyes of Vivian "Viv" Franklin, Screwdrivered sees the tattooed, pierced and just down right cheeky app designer’s life take an unexpected turn when a distant aunt dies and Vivian discovers herself the sole beneficiary to her will; inheriting a house, a car, a bunch of animals and a whole new world of trouble. Taking a step away from her own life, Vivian travels to the small country town her aunt called home to find a rundown house, a bunch of new friends and a librarian determined to put a halt to all of her plans, managing to find along the way everything she ever wanted, even if it wasn’t in exactly the package she expected…..

I honestly really loved this book. While I adore Caroline and Simon, it was also really refreshing to delve into the mind of a brand new character and a whole different life. We briefly met Viv in Rusty Nailed and when I learned Screwdrivered would be her story, I was very excited. Alice Clayton certainly doesn’t disappoint either in this heartwarming tale where opposites attract and finding a home is sometimes in the last place you expected or planned.

Vivian was a great main character to follow in this story. She’s bold, funny and independent. She can take care of herself, does what she wants and is not ashamed of who she is. In Screwdrivered, Viv’s life takes a drastic change, but it was so wonderful seeing her adapt and embrace things. The house she inherits literally changes her life and the small town it’s nestled in welcomes Viv with open arms as she finds such a wonder new chapter to her life there.

Alice Clayton includes two very different romance options for Viv in the forms of Hank, a rough and tumble cowboy and Clark, the stuffy and stoic librarian and head of the historical society who needs his feathers ruffled. It’s quite clear to readers from the very beginning where the story is heading in relation to Vivian’s love life and although I would normally not go into too much detail for fear of giving away spoilers, I just need to gush here about Clark. How cute it Clark?!?

It’s a story of opposites attracting with Vivian and Clark, with polite and proper Clark completely the opposite of rough around the edges Vivian, and yet the two work so well. They are so very adorable. There’s fire between them from the moment Clark takes it upon himself to stick his nose into Vivian’s renovation plans and although Clark is the last thing Viv thought she wanted in a man, the too slowly develop a very easy friendship that sees Vivian tease Clark and get him riled up; bringing out a different side to him that makes for some very entertaining reading. Their romance is sweet and develops slowly in a way that leaves you very satisfied as the reader when they eventually get together.

Another brilliant Alice Clayton novel, Screwdrivered will thrill readers with its witty dialogue and character dynamic. Great chemistry makes for some spectacularly entertaining scenes and will in no way disappoint!

Source: Sent for review by Simon & Schuster Australia (Thank you Jennifer!)
Format: Paperback
Buy it: Bookworld | The Nile | The Book Depository | Amazon
My Recommendation: Don't miss this is amazing series!
Cover: Very sexy and I love the blue coloring!
Will I read sequel/continue with series: YES!