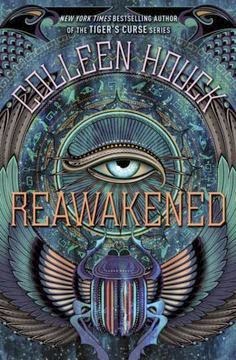 When seventeen-year-old Lilliana Young enters the Metropolitan Museum of Art one morning during spring break, the last thing she expects to find is a live Egyptian prince with godlike powers, who has been reawakened after a thousand years of mummification.

And she really can't imagine being chosen to aid him in an epic quest that will lead them across the globe to find his brothers and complete a grand ceremony that will save mankind.

But fate has taken hold of Lily, and she, along with her sun prince, Amon, must travel to the Valley of the Kings, raise his brothers, and stop an evil, shape-shifting god named Seth from taking over the world.

From New York Times bestselling author Colleen Houck comes an epic adventure about two star-crossed teens who must battle mythical forces and ancient curses on a journey with more twists and turns than the Nile itself.

Thoughts:
Ever since I can remember I've been obsessed with all things Ancient Egypt. It's one of my biggest loves and the chance to read a book, any book, featuring it is something I wouldn't pass up. And that's not even considering how AMAZING Reawakened sounds! Honestly, I'm practically salivating to get my hands on this pronto. I'll be pre-ordering it soon and counting down the days until I can get it in my hot little hands!


Doesn't Reawakened sound incredible? Will you be reading it?
And what are you waiting on this week?