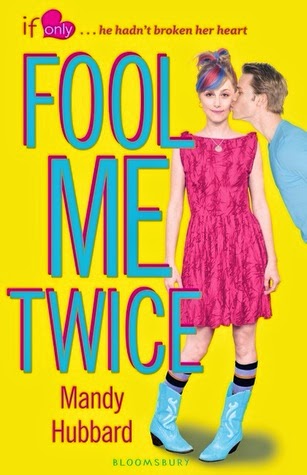 Last summer, Mackenzie and Landon were the perfect couple. And then he dumped her and broke her heart. Fast-forward a year and they’re back at their summer jobs at Serenity Ranch and Spa with Mack and her best friend Bailey, spending their time fantasising about making voodoo dolls and playing childish pranks on Landon.

Luckily for Mack, the perfect opportunity presents itself. Landon takes a nasty fall and suddenly he’s stuck in the past – literally. His most recent memory is of last summer, when they were together, so now he’s calling Mack pet names and hanging all over her.

The plan is simple: keep Landon at arm’s length, manipulate him so he’s the one falling in love, and then, BAM, dump him in the most epic revenge plot in the history of everdom. There’s only one teensy problem: Mack can’t fall for Landon a second time. -

Fool Me Twice by Mandy Hubbard is an extremely fun and entertaining contemporary romance that won me over with it's fresh and flirty feel and adorable storyline. I easily read this in a day and I was captivated by this summer romance with a twist from beginning to end!

Fool Me Twice is a well written and hilarious novel that follows eighteen year old Mackenzie, a quirky teenage girl with plenty of personality and attitude who is spending the summer working at Serenity Ranch and Spa. Last year Mackenzie had her heart broken when a summer romance with sexy cowboy Landon at the same ranch ended with him getting back with his ex-girlfriend. This year Mack refuses to fall for Landon's charms again, however when an accident leaves Landon with no memory of the last year and thinking he and Mack are still going out, Mackenzie decides to get take advantage of the situation and sets out to teach Landon a lesson. Mack has no plans to fall for Landon again, but as she continues to get closer to Landon in order to mess with him, Mack slowly begins to realize that maybe Landon isn't the jerk she first thought and maybe, just maybe they actually are perfect for each other.

I'll be honest here, heading into Fool Me Twice I didn't have a lot of expectations. I read the description and thought, "Oh, no. Here's a story about a girl foolish enough to fall for the same guy who previously broke her heart," and honestly didn't expect anything close to what I got with this novel. I mean, really, I LOVED Fool Me Twice. This is the first novel I've read by Mandy Hubbard, although I know it's not the first book she's written and can say it definitely won't be my last as I found myself really entranced by this fun and funny tale.

Mackenzie was a smart and intelligent main character to follow who sets out to get a little revenge against the boy who broke her heart and then ignored her for a year. She plans to get Landon to fall for her, and pull pranks on him along the way before finally going in for the kill and breaking his heart. Hubbard writes Mack as endlessly likeable and impossible not to vie for. Though she's ultimately trying to get revenge, nothing Mack does is really malicious and is more in good fun. Dying someone's horse and setting dozens of mouse traps around their bed isn't exactly cruel. Cheeky and evil yes, but not nasty.

Hubbard compliments Mack's schemes and plans perfectly by giving her the perfect partner in Landon, who is actually far from being the jerk both you as the reader and Mackenzie expect as the story starts out. Landon gives as good as he gets and takes Mack's pranks in stride; taking the pranks with a smile and good humor throughout the novel.

Mack and Landon may have had a "perfect "summer romance the year before Fool Me Twice is set, but as Mackenzie follows through with her plans, she and Landon get to know each other in a new and different way than they did the first time they were together. They have fantastic chemistry that's undeniable throughout the story and their relationship has it's deep moments and it's light ones. Hubbard has penned a great couple in them and they really were fun to follow. I loved learning why Landon did what he did the first time and seeing that maybe not everything is as it first appears.

Rich in smiles, laughs and romance as Mandy Hubbard teams Mack up with her best friend Bailey to provide moral support and assistance, Fool Me Twice is a great summer read guaranteed to provide a lot of entertainment and fun!

Source: Sent for review by Bloomsbury Australia (Thank you Sonia!)
Format: Paperback
Buy it: Bookworld | The Nile | The Book Depository | Amazon
My Recommendation: Perfect if you're fans of Stephanie Perkins
Cover: It's so colorful and actually quite cute.....
Will I read sequel/continue with series: Yes.