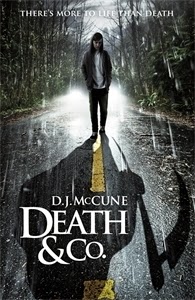 Adam is a Luman, and it runs in the family. Escorting the dead from life into light, Adam must act as guide to those taken before their time. As his older brothers fall into their fate however, Adam clings to his life as a normal kid - one who likes girls, hates the Head and has a pile of homework to get through by Monday morning.

When Adam gets a terrible premonition he realises that he must make a devastating choice, risking his life, his family and his destiny.

Death & Co. is D.J. McCune’s debut novel and is a quaint read with a unique twist on the mythology that is the grim reaper and their important role between life and death.

Told through the eyes of fifteen year old Adam Mortson, Death & Co. introduces us to the Lumen, a race of benevolent beings tasked with transporting souls into the afterlife. As a Luman, our hero Adam is one of many, with his entire family having devoted their existence to helping souls move on. His brothers and father may be happy with their positions as Lumen but Adam has other ideas—he simply wants to be a normal teenager.

D.J. McCune does a good job with setting up the initial details of her Lumen society within Death & Co. This is a unique twist on the typical Grim Reaper and explores the familial bond that exists between them as they’re all happy to be Lumen—all but Adam. Whilst this book didn’t blow me away I did enjoy reading Adam’s tale.

McCune does just enough to capture her reader’s attention, although I will admit I think the premise had more potential. The concept is great and while the story is readable, it could have benefited from a more driven plotline and substantial character development. Though Adam, for the most part, is likable, I found it hard to become attached and really invested in his story. While I understood his reluctance to be a part of the Lumen society, I felt bored by his constant groaning over his situation. I just wanted him to accept things, and try a bit harder.

I liked how McCune explored teen issues like bullying realistically but I wished more had eventuated from the storyline. There didn’t seem to be a real purpose to the story like I hoped there would have been and I wanted to explore the Lumen more—something I hope McCune does with the next book.

Personally, Adam’s brother Luc was the biggest draw from the story for me. I loved his personality and would enjoy getting to see more of him. Adam’s love interest Melissa is bland and their chemistry almost non-existent. I appreciated the longing’s of first love that McCune hints at but at the same time didn’t really feel it.

Overall, Death & Co. has a unique plot whose potential unfortunately fell flat. And yet for the society D.J. McCune has introduced us to alone, I think I’d like to read the next book, just to see what happens. Personally, I think Death & Co would appeal to a male audience (not trying to be sexiest—just honest) more-so and may be more up their alley!

Source: Sent for review by Hot Key Books (Thanks guys!)
Format: Paperback
Buy it: Bookworld | The Nile | The Book Depository | Amazon
My Recommendation: If you want something different, maybe give this a try.
Cover: This cover is awesome and so absolutely striking--I love it!
Will I read sequel/continue with series: Possibly.....