Book Shelf: How to Beguile a Duke by Ally Broadfield 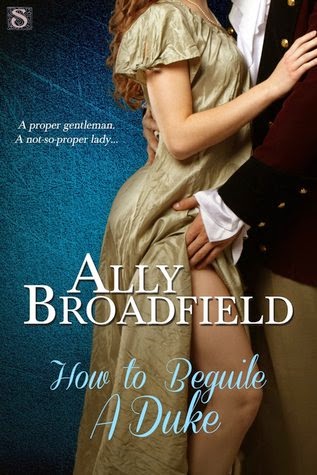 The spirited Catherine Malboeuf has just arrived in England to reclaim her ancestral home, Walsley Manor, and a valuable missing heirloom. Nicholas Adair, the attractive and frustratingly inflexible Duke of Boulstridge, however, is quite unwilling to sell the estate back to Catherine. Unless, of course, she accepts a small wager...

Nick will sell Walsley Manor if—and only if—Catherine secures an offer of marriage from an eligible member of the ton before the end of the London season.

Of course, Nick is certain he'll win. After all, no proper gentleman would ever marry a woman who conceals a cutlass in her skirts. Yet something about Catherine's unconventional disposition seems to ignite a need deep inside him. A need that won't just cost him the wager, but the very heart he swore to never give away...

How to Beguile a Duke by Ally Broadfield is an enticing and beguiling historical tale featuring a rough-around-the-edges young woman with a heart of gold and a stoic Duke who underestimates her, but ultimately finds himself drawn to the entrancing lady…..

How to Beguile a Duke is told through the varying POV’s of Catherine Malboeuf, a spirited young woman who has just arrived in England in the hopes of reclaiming a home that once belonged to her mother’s family in order to hopefully find clues to a family heirloom believed to be hidden on its grounds, and Nicholas Adair, the appealing and stoic Duke of Boulstridge who now owns the home, Walsley Manor, and who has no intention of selling.

Although the two come from very different social standings, sparks fly when the pair team up in the hopes of finding the expensive tiara Catherine refuses to return home without. But when a wager between them sees Catherine look to garner an offer of marriage in order to win Walsley Manor from Nicholas, both are unprepared for the attraction between them to blossom and soon both find the other may be exactly what they never knew they needed…..

Having previously read Ally Broadfield’s debut novel Just a Kiss, Broadfield has won me over with her detailed writing and charismatic characters. Though I’m not the biggest historical fan, I’m beginning to be won over, and its novels like How to Beguile a Duke that are getting me there.

Following Catherine and Nick was really an enjoyable experience. They’re understandably results of their standings and their time, but I liked that they both had fire and attitude. Catherine said what she thought, and though she tried very hard to be a lady, really was someone different. I liked that Broadfield had her fight social norms and tell Nicholas exactly what she was thinking.

Nick on the other side was a Duke through and through, but he was also a kind man who had plenty of personality of this own. Sure he had honor and charm, but he was also cheeky at times and I enjoyed seeing him rile Catherine up—he knew how to push her buttons, and she certainly knew how to give it back.

Together, Catherine and Nicholas were sweet. There’s an underlying sexual tension to their relationship; the attraction is there, but neither willing to face it in the beginning. Eventually though they give into the inevitable with a few stolen kisses and a sexy parlor scene before Broadfield takes them to where readers hoped they would go……

Rich in high society, scandal and even mystery, How to Beguile a Duke is a great short historical read—can’t wait to see what Ally Broadfield writes next!

Source: Sent for review by the author (Thank you Ally!)
Format: Kindle ebook
Buy it: Bookworld | Barnes & Noble | The Book Depository | Amazon | Kobo
My Recommendation: A brilliant historical completely worth a read!
Cover: I think it's very sexy and I love the colors.....
Will I read sequel/continue with series: This is a stand alone novel, but I'll definitely read more by Ally Broadfield if I have the chance!