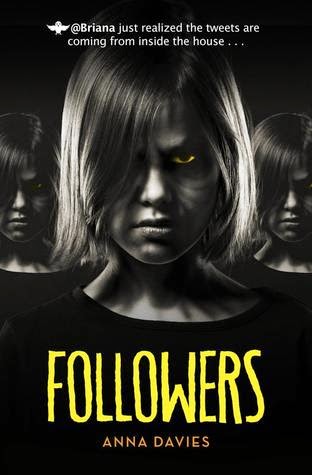 When Briana loses out on a starring role in the school's production of Hamlet, she reluctantly agrees to be the drama department's "social media director" and starts tweeting half-hearted updates. She barely has any followers, so when someone hacks her twitter account, Briana can't muster the energy to stop it. After all, tweets like "Something's rotten in the state of Denmark . . . and a body's rotting in the theater" are obviously a joke.

But then a body IS discovered in the theater: Briana's rival. Suddenly, what seemed like a prank turns deadly serious. To everyone's horror, the grisly tweets continue . . . and the body count starts to rise.

There's no other explanation; someone is live-tweeting murders on campus.

With the school in chaos and the police unable to find the culprit, it's up to Briana to unmask the psycho-tweeter before the carnage reaches Shakespearian proportions . . . or she becomes the next victim.

Followers by Anna Davis is marketed as a scary and mysterious murder mystery with Shakespearean elements woven into its pages but does unfortunately not translate well onto paper in this quick read that holds promise but ultimately falls flat.

I’m not going to beat around the bush here; Followers is, for the most part, a disappointment. While it benefits from being a short, quick read, the premise promised so much, including a really exciting murder tale. However the actual novel holds very little of this considering it’s almost halfway through the novel before anything nefarious even starts happening.

Told through the eyes of Briana Beland, a student who loses out on a coveted role in her school’s production of Hamlet and instead finds herself thrust into the shadows of the stars, Followers sees Briana faced with some mystery when students start dying and the school population suspect Briana of being the culprit when the mysterious "Hamlet’s Ghost" starts tweeting about the murders.

I’m being quite generous in my description of this novel, as while all these events do happen, they seem to get lost amongst the petty drama and social issues in this novel. Davis focuses too much on the lead up to the murders and the petty teen drama that encompasses McHale than the actual murders and mystery that surround them. More than half a novel on this stuff gets tiresome as we wait for something entertaining to happen and I found it difficult to concentrate when I wasn’t very interested in her characters’ lives.

Unfortunately for me, I found main character Bree to be quite pathetic and vain throughout the novel. Bree wants to be a star and while she has potential and some talent, seems to get too caught up in the nonsense at McHale with "friends" who turn on her without a second thought. Personally, the book could have benefited from a heroine that wasn’t quite so worried about what other people thought—someone more likable. Granted Bree does eventually grow a little bit, but not before you as the reader find her tiresome. Basically I found her too self-centered and a bit dense.

The ending was too predictable for my liking and seemed farfetched. Everything concluded too quickly and I found too many aspects seemed unbelievable. There was no police involvement in the deaths on campus and yet Bree stumbles over the identity of the killer as easy as pie. Someone had evidently gone to great lengths to commit murder, not just now, but decades in the past and a teenager stumbles upon their identity without any difficulty—yeah; not buying it!

Overall Followers was a great concept that could have been written a lot better. Anna Davis needed to have given the story a bit more depth and believability to have given it any chance…..

Source: Sent for review by Scholastic Australia (Thanks guys!)
Format: Paperback
Buy it: Bookworld | The Nile | The Book Depository | Amazon
My Recommendation: This book may not be for everyone, but everything is worth a shot I guess.
Cover: I think the cover's cool--creepy but cool.
Will I read sequel/continue with series: This is a standalone tale, however it is a part of the Point Horror series which I may read more of as it's by varying authors......