Welcome to the Blog Tour for Analiese Rising by Brenda Drake thanks to YA Bound Blog Tours. 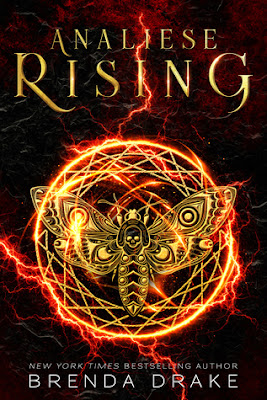 When a stranger gives Analiese Jordan a list of names before he dies, the last thing she expects to see is her own on it. Not. Cool. Her search for answers leads to the man’s grandson, Marek, who has dangerous secrets of his own. Both are determined to unlock the mystery of the list.

But the truth is deadly. Analiese is a descendant of the God of Death, known as a Riser, with the power to raise the dead and control them. Finding out she has hidden powers? Cool. Finding out she turns corpses into killers? No, thank you.

Now the trail plants her and Marek in the middle of a war between gods who apparently want to raise an army of the Risen, and Analiese must figure out how to save the world—from herself.

I take off in the other direction. My Vans pound hard against the cobblestones. Marek is panting behind me.

Only when I go around a corner do I cease running. I grab my side and catch my breath.

Marek eases to a stop beside me, breathing heavily. “I thought you were ditching me.”

“I couldn’t stay there,” I say. “Not with those things around.”

Marek checks the time on the GPS screen. “We need to keep moving. It’s a little after one. The Louvre doesn’t open until nine.”

“We’re going to keep walking. See Paris. Maybe get coffee when a café opens. Try to get our minds off what just happened.”

We walk. Sometimes there’s a bench, and we sit. My face and hands are like ice. My head is throbbing, so are my feet. I need coffee. Or better, a bed.

The quaint backstreets of Montmartre are quiet at almost three in the morning. We reach the square, and I stand on one of the corners. Streetlamps line the block, giving little light, but I recognize the buildings.

“Right here,” I say. “This square is filled with artists displaying their work during the day. My parents took a photograph in this exact spot.”

Marek ambles over and pretends he’s holding up a camera. “Say cheese.”

It takes a second for what he’s doing to register, but when it does, I’m suddenly warm inside, and I flash him a smile.

He clicks the pretend camera.

We make our way up the hill toward Sacré-Coeur Basilica. Its spotlighted facade calls to us. The white stone chapel with its three considerable arches in front, dome roofs, and bell tower overlooks Paris. The city is a black sea at night with beacons of light spreading across its surface. The Eiffel Tower is hidden behind buildings and trees.

I sit on a step. “In one photo, my mother sits here alone. I bet my father took it.”

Marek raises his hands and takes another fake picture. His nose is red from the cold. “How are you holding up?” he asks.

The wind brushes my hair away from my face, and a chill slips down my back. “I’m numb. Can’t feel my toes.”

“We could ride the Metro. Get warm.” He pulls the collar of his coat up and tucks his scarf inside.

“We have to budget.” I skip down a few steps. “Tomorrow, after we’re done at the Louvre, we’ll go to the embassy, then I’ll call my grandparents. Have them wire money.”

“Come on.” He grasps my hand and leads me to the side of the chapel.

The wind bites at my skin. I stuff my free hand into my pocket and stare through some trees, and I can barely make out the Eiffel Tower in the dark. Only a few lights and its silhouette can be seen at this time of the morning.

Brenda Drake, the youngest of three children, grew up an Air Force brat and the continual new kid at school. Her fondest memories growing up is of her eccentric, Irish grandmother’s animated tales, which gave her a strong love for storytelling. So it was only fitting that she would choose to write stories with a bend toward the fantastical. When Brenda’s not writing or doing the social media thing, she’s haunting libraries, bookstores, and coffee shops or reading someplace quiet and not at all exotic (much to her disappointment).