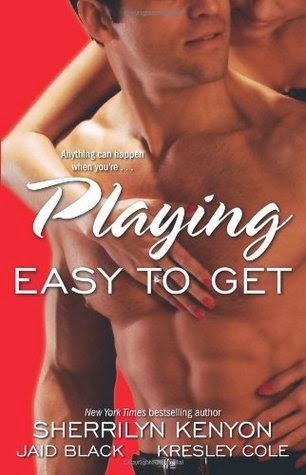 Let your fantasies run wild with these unforgettable novellas where bigger is most definitely better -- and playing easy-to-get is the only way to go!

I feel that I must point out the only reason I bought this book was to read Kresley Cole's story within, The Warlord Wants Forever, although I am a massive Sherrilyn Kenyon fan, so I may one day finally read her story as well, perhaps even the story from Jaid Black that features in the book.

However, until then, this review is for The Warlord Wants Forever only and I have to say it was a really nice introduction into Kresley Cole's Immortals After Dark series, even though I have read other books in the series already. Perfectly paced and sensual, it may have been a novella, but it wasn't that short; meaning there was plenty of time to enjoy getting to know Myst and Nikolai Wroth as they got to know one another.

Myst was a really quirky female lead. She was ah...kinda crazy at times, but in a good way and I quite liked her. Nikolai was sexy as hell; a real warlord and together these two just oozed sex. The romance between them was swift, but not too much as to take away the entertainment factor as they struggled with thier differences.

Cole wrote the sex scenes incredibly hot--like fan yourself hot and I loved seeing Myst and Wroth lose themselves to each other. It was tantalizing. They're another great couple who compliment each other wonderfully.

Source: I bought.
Format: Paperback
Buy it: Bookworld | The Nile | The Book Depository | Amazon
My Recommendation: If you're a fan of the Immortals After Dark series, you'll need to read Myst and Nikolai's story!
Cover: Simple, but decent.
Will I read sequel/continue with series: Absolutely!