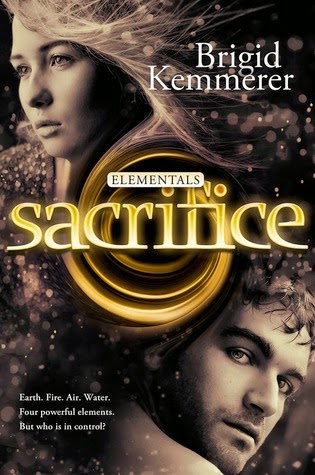 One misstep and they lose it all. For the last time.

Michael Merrick understands pressure. He's the only parent his three brothers have had for years. His power to control Earth could kill someone if he miscalculates. Now an Elemental Guide has it in for his family, and he's all that stands in the way.

His girlfriend, Hannah, understands pressure too. She's got a child of her own, and a job as a firefighter that could put her life in danger at any moment.

But there are people who have had enough of Michael's defiance, his family's 'bad luck'. Before he knows it, Michael's enemies have turned into the Merricks' enemies, and they're armed for war.

They're not interested in surrender. But Michael isn't the white flag type anyway. Everything is set for the final showdown.

Four elements, one family. Will they hold together, or be torn apart?

Sacrifice is the fast paced and heart-wrenching conclusion to Brigid Kemmerer’s amazing Elementals series and sees the series go out with a bang! Rich in friendship, romance and adrenaline pumping danger, Sacrifice is as heart breaking as it is heart warming at times and is filled with plenty of action from the opening page.

Told through the eyes of eldest Merrick brother Michael and his girlfriend the sexy and capable mother and firewoman Hannah, Sacrifice is a thrilling blend of danger and excitement. Opening up to an edge of your seat first chapter, Sacrifice sees Michael fight to keep his brothers together as someone lights a series of dangerous fires and causes a few dangerous explosions all in the hope of destroying the Merrick family once and for all.

Brigid Kemmerer has left readers spell bound with every book in this series and Sacrifice is no exception. As sad as I am to see the series end, I’m very satisfied with how the series has come to a close, even though parts of it broke my heart. Loyalties are tested in Sacrifice and the Merricks and those closest to them must band together like never before in the midst of a surprising discovery and a heartbreaking loss that sees one of the main characters loose their life!

I’ve always has a special place in my heart for Michael Merrick. Right after I read the first novel in this series Storm, I went and got myself an ecopy of the prequel novella, Elemental featuring Michael just to see how his story began. He won my heart in that heartbreaking story and has won it a little bit more with every book since. Michael really has had to step up and be the father figure in his brother’s lives since the loss of their parents. He had to grow up real fast and has been the strength of the family for a long time; holding it together and keeping it from falling apart.

In Sacrifice we see another side of Michael. While he’s still stoic and gruff he’s also quite a bit vulnerable too and it was emotional to see him break down at times. He really did just want to keep his family together and seeing him feel like he’s failed them and let them down was quite confronting. Here is a man with so much power at his fingertips and he’s torn down by the idea of loosing his family. How can you not love and appreciate that?

Michael finds love and solace in the arms of his girlfriend Hannah in this book, even if she doesn’t exactly know what is going on and he is determined to keep her at arms length. I’ll admit, I’ve always loved Hannah but I think I have a new appreciation for her after this book. A fireman who became a mum at the age of seventeen and yet who loves and cares deeply for her five year old son James, Hannah has always been something I thought suited Michael well.

Michael and Hannah have both had responsibilities that other individuals their age do not, and because of this they’re very understanding of the situation the other finds themselves in. I was surprised to find that Michael and Hannah’s relationship hadn’t progressed quite as far as we had believed from previous novels; this was a clever ploy on Brigid Kemmerer’s part to allow Michael and Hannah to find their feet a bit more in this novel.

Personally, I didn’t find there was as much romance in this book as some of the others in the series as Michael and Hannah’s relationship was already established. They were already dating so there was no first meeting or getting to know you etc. that you would expect when two people are first getting to know each other. And yet, I didn’t mind this. I think considering where they both are in life it was fitting that they faced more mature and adult issues with their relationship.

Sacrifice is a very fast paced and exciting novel from the very beginning, but Brigid Kemmerer will also make you feel as we experience the loss of one of the main characters. The ending to this series is quite bittersweet and sad, but considering everything the Merrick’s have been though it seems fitting that the series should end this way; with sadness but beautiful possibility.

I have to give Brigid Kemmerer a big pat on the back for writing a series filled with immensely alluring characters with fantastic dynamic but also exploring some very real issues throughout the series. Cementing herself as someone I’ll follow no matter what she writes next, I can’t wait to see what she releases in the future!

Source: Sent for review by Allen & Unwin (Thank you guys!)
Format: Paperback
Buy it: Bookworld | The Nile | The Book Depository | Amazon
My Recommendation: If you love fantastic series with different elements and great family dynamics this series is for you!
Cover: I love ALL the covers in this series
Will I read sequel/continue with series: This is the final book in the Elemental series, but I look forward to whatever Brigid Kemmerer writes next......