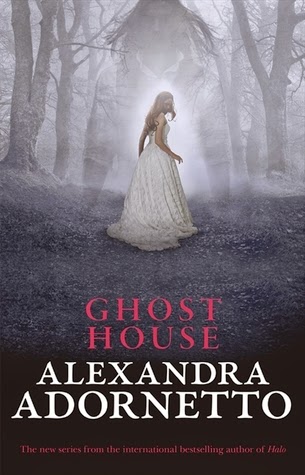 In the spirit of the Halo trilogy, this series from international best-selling author Alexandra Adornetto is guaranteed to be another hit from the talented young author who understands her audience like no other.

After the loss of her mother, Chloe Kennedy starts seeing the ghosts that haunted her as a young girl again. Spending time at her grandmother's country estate in the south of England is her chance to get away from her grief and the spirits that haunt her. Until she meets a mysterious stranger Alexander Reade is 157 years dead, with secrets darker than the lake surrounding Grange Hall and a lifelike presence that draws Chloe more strongly than any ghost before. But the bond between them awakens the vengeful spirit of Alexander's past love, Isobel. And she will stop at nothing to destroy anyone who threatens to take him from her.

To stop Isobel, Chloe must push her developing abilities to their most dangerous limits, even if it means losing Alex forever and giving the hungry dead a chance to claim her for their own...

Ghost House is Alexandra Adornetto’s latest release and is a hauntingly and brilliantly written tale of vengeful spirits, ghosts and the supernatural woven together with exhilarating connections and a beautiful romance.

Reminiscent of Meg Cabot’s Mediator series, Ghost House follows seventeen year old Chloe Kennedy, a young woman who is still grieving the recent loss of her mother and who has the troublesome ability to see the dead. When Chloe and her brother head to England to spend some time with their grandmother in the wake of their fathers grief, Chloe finds herself swept up in a unexpected mystery when it becomes evident the country estate her grandmother owns houses more secrets and spirits than Chloe could have ever expected. Meeting the alluring stranger Alexander Reade, long since dead who sparks feelings in her she never expected to experience, Chloe soon finds herself in the dangerous sights of Alex’s long dead love that won’t rest until Chloe joins her in death.

I have to say that I absolutely loved Ghost House! This is the first novel I’ve ever read that has been written by Alexandra Adornetto, although I do know her Halo trilogy is quite popular, but I can say it will definitely not be the last as I was completely swept up into this ghostly tale that was perfectly written and a joy to read! The story within Ghost House is wonderfully detailed, with Adornetto’s writing lyrical and flowing. The country estate where the majority of the novel is set is wonderfully described, haunting and almost gothic.

I was very much a fan of the multitude of characters we met during the story including heroine Chloe, ghostly Alex, Chloe’s brother Rory and Grandmother Dee and even others such as Joe the stable hand, quirky ghost hunters Mavis and May and even the vengeful spirit of Isobel. All added so much life (even if some of them were actually dead!) and character to the story. The setting was perfect and the characters complimented it, and the plotline, perfectly.

As our protagonist, I really liked Chloe. She’s obviously in a state of grief having just lost her mother, but she still was such a down to earth and willing character to follow. Surprisingly Chloe undertakes a lot of growth in this novel as she learns of Alex’s past and begins to understand her ability to see the dead. There’s still so much left to know about Chloe’s gift, but Alexandra Adornetto gives us just enough info to keep the story moving and Chloe learning.

Alexander Reade was beguiling as the seductive 19th century ghost who haunts Grange Hall. Alex is one of those old world gentlemen with morals and standards. There’s something so appealing about a guy like him and even though he made some mistakes during his life on earth, Alex is truly good and comes to care for Chloe. Oh, and he’s also devilishly handsome, charming and witty, which are a plus!

Chloe and Alex are beyond adorable together. Despite the fact they both come from different eras and one is dead while the other is alive, these two really compliment each other. Their romance isn’t overly thrown in your face and is instead a subtle underlining to the story that will have you giddy with the promise of their relationship. They have many obstacles in their way including Alex’s vengeful past love and his being a ghost and all, but it’s impossible not to hope they find a way to be together.

Wrought with ghostly hauntings and danger, Ghost House had me glued from the opening page. Considering it’s such an enjoyable read, I didn’t want it to end and Alexandra Adornetto has me keen as can be to get my ends on the second book with the promising ending!

Source: Sent for review by Harper Collins Australia (Thank you guys!)
Format: Paperback
Buy it: Bookworld | The Nile | The Book Depository | Amazon
My Recommendation: If you enjoyed Meg Cabot's Mediator series or enjoy ghostly tales then you should pick up Ghost House! Cover: I think it's very pretty.
Will I read sequel/continue with series: Yes!