I'm super excited to help K.A. Tucker celebrate her latest release by participating in the Release Day Launch for Burying Water thanks to InkSlinger PR! I absolutely adore K.A Tucker's previous work and cannot wait to read this when I get myself a copy! 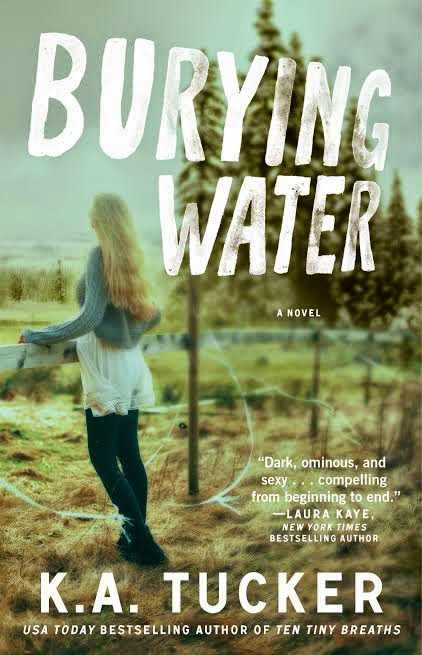 The top-selling, beloved indie author of Ten Tiny Breaths returns with a new romance about a young woman who loses her memory—and the man who knows that the only way to protect her is to stay away.

Left for dead in the fields of rural Oregon, a young woman defies all odds and survives—but she awakens with no idea who she is, or what happened to her. Refusing to answer to “Jane Doe” for another day, the woman renames herself “Water” for the tiny, hidden marking on her body—the only clue to her past. Taken in by old Ginny Fitzgerald, a crotchety but kind lady living on a nearby horse farm, Water slowly begins building a new life. But as she attempts to piece together the fleeting slivers of her memory, more questions emerge: Who is the next-door neighbor, quietly toiling under the hood of his Barracuda? Why won’t Ginny let him step foot on her property? And why does Water feel she recognizes him?

Twenty-four-year-old Jesse Welles doesn’t know how long it will be before Water gets her memory back. For her sake, Jesse hopes the answer is never. He knows that she’ll stay so much safer—and happier—that way. And that’s why, as hard as it is, he needs to keep his distance. Because getting too close could flood her with realities better left buried. The trouble is, water always seems to find its way to the surface.

From Burying Water....
Prologue
Jesse
Now
This can’t be real . . . This can’t be real . . . This can’t be real . . .
The words cycle round and round in my mind like the wheels on my speeding ’Cuda as its ass-end slips and slides over the gravel and ice. This car is hard to handle on the best of days, built front-heavy and overloaded with horsepower. I’m going to put myself into one of these damn trees if I don’t slow down.
I jam my foot against the gas pedal.
I can’t slow down now.
Not until I know that Boone was wrong about what he claims to have overheard. His Russian is mediocre at best. I’ll giveanything for him to be wrong about this.
My gut clenches as my car skids around another turn,the cone shape of Black Butte looming like a monstrous shadow ahead of me in the pre-dawn light. The snowy tire tracks framed by my headlights might not even be the right ones, but they’re wide like Viktor’s Hummer and they’re sure as hell the only ones down this old, deserted logging road. No one comes out here in January.
The line of trees marking the dead end comes up on me before I expect it. I slam on my brakes, sending my car sliding sideways toward the old totem pole. It’s still sliding when I cut the rumbling engine, throw open the door, and jump out, fumbling with my flashlight. It takes three hard presses with my shaking hands to get the light to hold.
I begin searching the ground. The mess of tread marks tells me that someone pulled a U-turn. The footprints tell me that more than one person got out. And when I see the half-finished cigarette butt with that weird alphabet on the filter, I know Boone wasn’t wrong.
“Alex!” My echo answers once . . . twice . . . before the vast wilderness swallows up my desperate cry. With frantic passes of my flashlight, my knuckles white against its body, I search the area until I spot the sets of footprints that lead off the old, narrow road and into the trees.
Frigid fingers curl around my heart.
Darting back to my car, I snatch the old red-and-blue plaid wool blanket that she loves so much from the backseat. Ice-cold snow packs into the sides of my sneakers as I chase the trail past the line of trees and into the barren field ahead, my blood rushing through my ears the only sound I process.
The only sign of life.
Raw fear numbs my senses, the Pacific Northwest winter numbs my body, but I push forward because if . . .
The beam of light passes over a still form lying facedown in the snow. I’d recognize that pink coat and platinum-blond hair of hers anywhere; the sparkly blue dress that she hates so much looks like a heap of sapphires against a white canvas.
My heart freezes.
“Alex.” It’s barely a whisper. I’m unable to produce more, my lungs giving up on me. I run, stumbling through the foot of snow until I’m on my knees and crawling forward to close the distance. A distance of no more than ten feet and yet one that seems like miles.
There’s no mistaking the spray of crimson freckling the snow around her head. Or that most of her long hair is now dark and matted. Or that her silver stockings are torn and stained red, and a pool of blood has formed where her dress barely covers her thighs. Plenty of footprints mark the ground around her. He must have been here for a while.
I know that there are rules to follow, steps to make sure that I don’t cause her further harm. But I ignore them because the sinking feeling in my stomach tells me I can’t possibly hurt her more than he already has. I nestle her head with one hand while I slide the other under her shoulder. I roll her over.
Cold shock knocks the wind out of me.
I’ve never seen anybody look like this.
I scoop her limp body into my arms, cradling the once beautiful face that I’ve seen in every light—rage to ecstasy and the full gamut in between—yet is now unrecognizable. Placing two blood-coated fingers over her throat, I wait. Nothing.
A light pinch against her lifeless wrist. Nothing.
Maybe a pulse does exist but it’s hidden, masked by my own racing one.
Then again, by the look of her, likely not.
One . . . two . . . three . . . plump, serene snowflakes begin floating down from the unseen sky above. Soon, they will converge and cover the tracks, the blood. The evidence. Mother Nature’s own blanket to hide the unsightly blemish in her yard.
“I’m so sorry.” I don’t try to restrain the hot tears as they roll down my cheeks to land on her mangled lips—lips I had stolen plenty of kisses from, back when I was too stupid to realize how dangerous that really was. This is my fault. She had warned me. If I had just listened, had stayed away from her, had not told her how I felt . . .
. . . had not fallen wildly in love with her.
I lean down to steal a kiss even now, the coppery taste of her blood mixing with my salty tears. “I’m so damn sorry. I should never have even looked your way,” I manage to get out around my sobs, tucking the blanket she loved to curl up in over her.
An almost inaudible gasp slips out. A slight breeze against my mouth more than anything else.
My lungs freeze, my eyes glued to her, afraid to hope. “Alex?” Is it possible?
A moment later, a second gasp—a wet, rattling sound—escapes.
She’s not dead.
Not yet, anyway.

Want more? I know I do--be sure to grab your copy today! 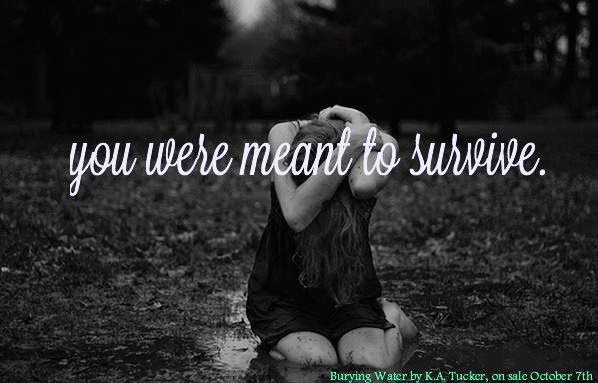 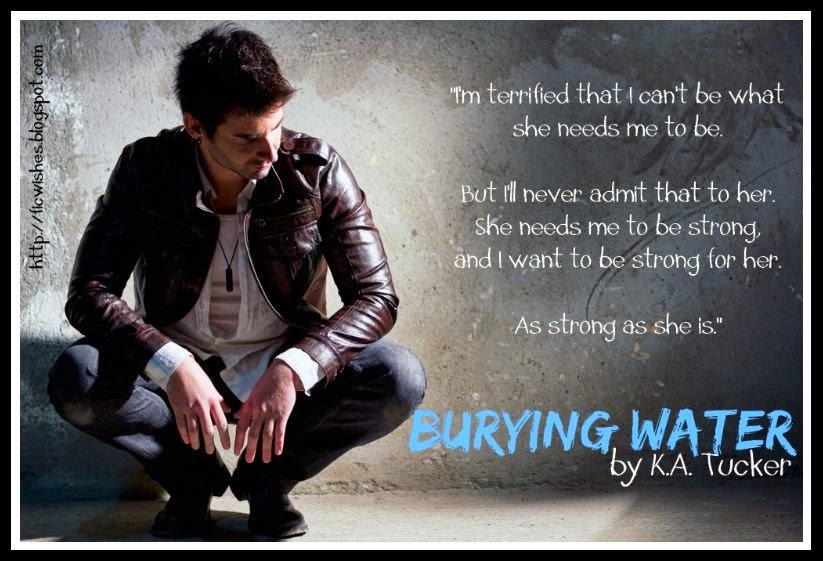 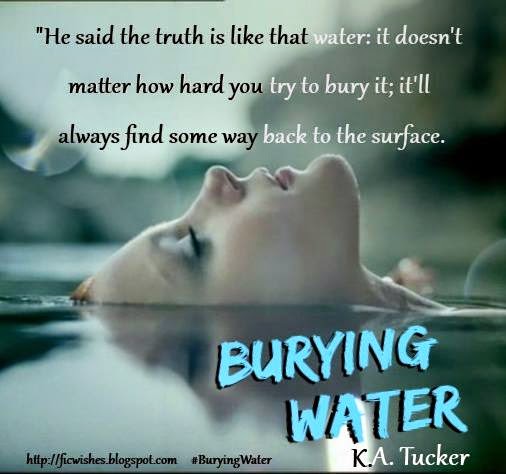 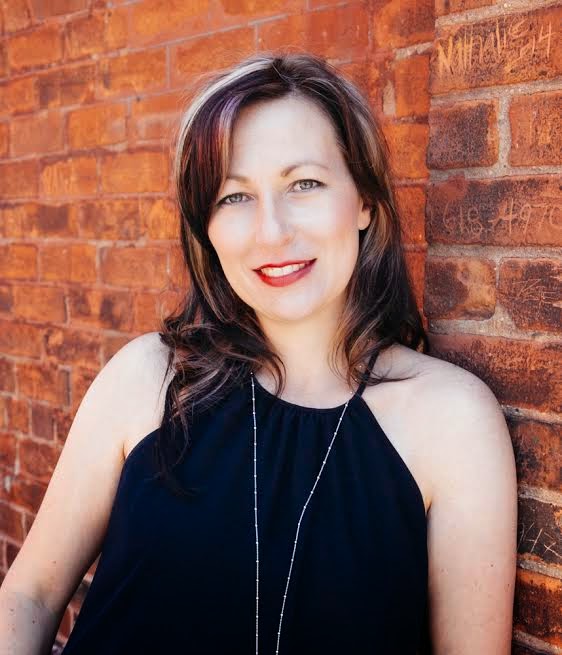 Born in small-town Ontario, K.A. Tucker published her first book at the age of six with the help of her elementary school librarian and a box of crayons. She is a voracious reader, and currently resides in a quaint town outside of Toronto with her husband, two beautiful girls, and an exhausting brood of four-legged creatures.

Make sure to get your copy today! 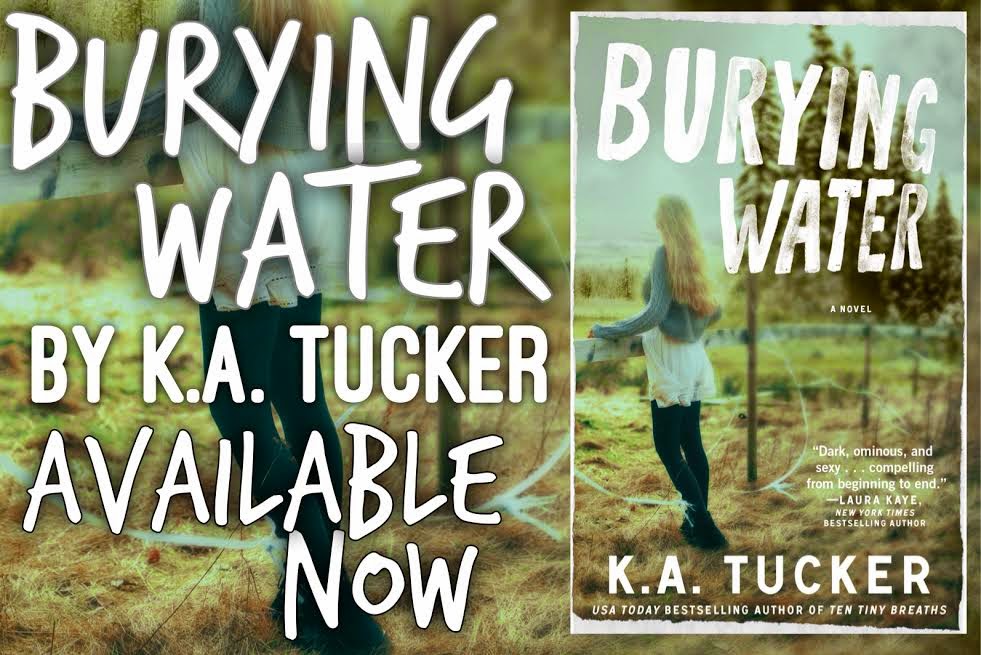