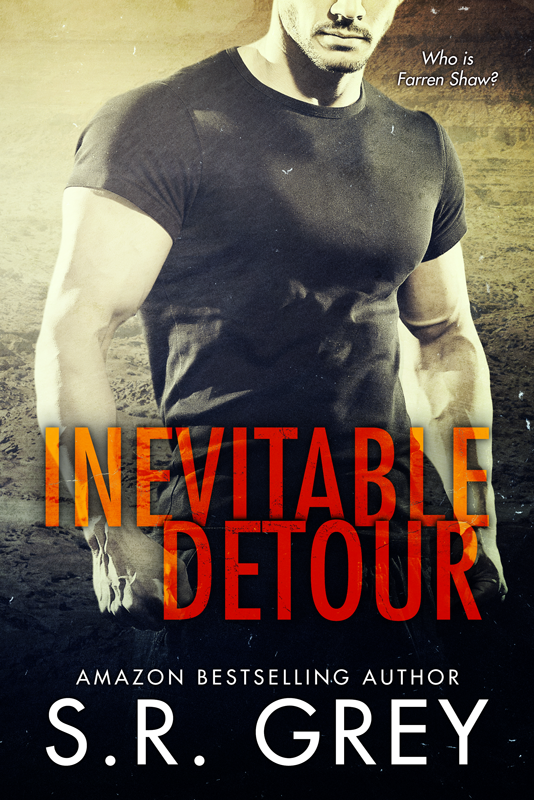 The day my life took an inevitable detour things got a little crazy.

My name is Essalin Brant, but everyone calls me Essa. I attend a small college in a tiny town, and in my twenty-two years of life I’ve never even traveled outside the state of Pennsylvania. You could say my life is pretty boring. I live by the rules. I’m a good girl and nothing exciting ever happens.

But that’s all about to change.

Enter Farren Shaw. Not only is he older and intimidating, but he’s more sure of himself than any 29-year-old man has a right to be. Did I mention that he’s drop-dead gorgeous? Well, he is. He also happens to be my best friend Haven’s brother. And I would be content with just fantasizing about Farren from afar, but when Haven suddenly goes missing, her gorgeous brother is the only one who believes me when I say she was abducted, even though all signs seem to suggest Haven left town willingly.

I know better, though. As does Farren. So when he asks me to accompany him to search for his sister, I accept.

That’s when the real adventure begins.

Our quest to find Haven takes us across the country. And throughout the time we spend together, I find myself falling for Farren . . . falling hard. He's everything I’ve ever wanted. But is he really someone I should fear?

Because aside from making me feel things I’ve never felt before, Farren is hiding something. Something big. What could this stunning man be keeping from me? And why? Is Haven’s disappearance somehow connected to his mysterious job?

All I know is that things are about to get real.

Welcome to the Inevitable Detour that has become my life.

Inevitable Detour is a fast paced and dangerous story that features dark themes and plenty of romance in S.R. Grey’s debut novel!

Inevitable Detour is told through the eyes of Essalin Brant a twenty-two year old college student whose boring and predictable life takes a drastic turn when her best friend Haven is kidnapped and the only person who believes Haven didn’t willingly leave on her own is Havens older brother and ex-military man Farren Shaw. When Farren decides to track down his sister using his connections, Essa invites herself along on the cross country journey and soon finds herself beginning to fall for Farren, the mysterious man she’s crushed on through photographs of Haven’s for years, but who she has only just met.

What starts out as a journey to rescue her best friend, soon drags Essa into the dangerous world of human trafficking and sex slavery as it becomes evidently clear that Farren’s secret life and work are possibly the reason behind his sister’s abduction, and getting to know Farren may put Essa in more danger than she can handle......

I’m going to be honest here; I’m at two minds when it comes to Inevitable Detour. To begin with the premise blew me away and I was very excited to read the story but I don’t think the novel quite lived up to expectations. And I also had a couple of issue’s with the storyline and characters that kept me from ever really becoming blown away by the story.

Essa is for the most part a likable main character and Farren is sexy and appealing as a military man who is trying to rescue his sister, but I think the author tried too hard to have Essa and Farren’s relationship start straight away. Rather than have these two connect and have a great chemistry that develops into something more, Essa is basically obsessed with Farren before she even meets him; completely blown away by his smouldering good looks and sexiness. I just felt like the story would have been better if their initial relationship developed more naturally.

And yet, Essa and Farren have a really good chemistry. There were some great tender moments shared between them during their journey that are obvious pinnacle points where Farren’s feelings for Essa are beginning to deepen and become something real. I liked these moments and interactions; they were some of my favourites during the story.

My other big issue was Haven and her response to what she had been though. Now I don’t want to give away too many spoilers, but this young woman had been kidnapped, raped and shared by different men. She’d been abused and assaulted and I just feel like she reacted too easily about the whole situation. Even if someone goes along with an assault and multiple instances of forced sex to avoid being hurt too much, surely they’re going to be traumatised and effected—Haven wasn’t as much as I would have expected and seemed ready to move on and be happy too soon. This just didn’t seem realistic in my eyes.

Problems aside, Inevitable Detour weaves together a harrowing kidnapping with a cross country journey that sees two people fall in love. Despite its quirks, the novel was fast paced and exciting at times—I may possibly pick up the sequel after that killer cliff-hanger ending!

Source: Sent for review by Xpresso Book Tours and the author (Thanks ladies!)
Format: Kindle ebook
Buy it: Amazon | Barnes & Noble
My Recommendation: Looking for something romantic and exciting? This may just be for you!
Cover: The cover is awesome--I really like it.
Will I read sequel/continue with series: Possibly after that ending......