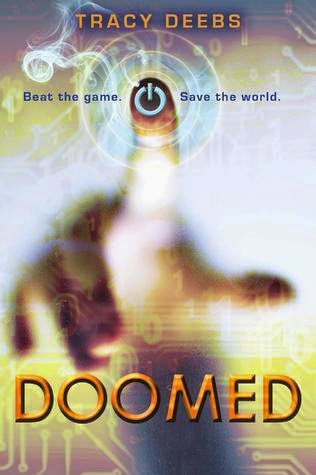 Beat the game. Save the world.

Pandora's an average teen, glued to her cell phone and laptop, until the day her long-lost father sends her a link to a mysterious site featuring photos of her as a child. Curious, Pandora enters the site, unwittingly unleashing a global computer virus that plunges the whole world into panic: suddenly, there's no Internet. No cell phones. No traffic lights, hospitals or law enforcement. Only Pandora's Box, a virtual-reality game created by Pandora's father, remains up and running. Together with her neighbors, gorgeous stepbrothers Eli and Theo, Pandora must follow the photographs from her childhood in an attempt to beat the game and track down her father—and rescue the world. Part The Matrix, part retelling of the Pandora myth, Doomed has something for gaming fans, dystopian fans, and romance fans alike.

Doomed by Tracy Deebs is an exciting and riveting dystopian-ish read that mixes together online gaming with a real life potential apocalypse in this highly addictive story that is sure to have you totally immersed in the excitement until the very end.

Heading into Doomed I wasn’t really sure what to expect. To begin with the cover is very unassuming and doesn’t tell you much about the story. Prior to actually beginning it, I admit I didn’t have many expectations, but was looking for something different and easy to read. That being said, I was really surprised by how much I enjoyed Doomed.

From the opening chapter of Doomed I was very much sucked in. Admittedly, that’s a very easy and typical thing to say, but it doesn’t make it any less true. Introducing us to main character Pandora, Doomed starts out in a very typical high school setting, before moving steadily onto the actual story.

The premise of Doomed is simple, but still quite intriguing. Our heroine unintentionally launches a computer virus or in this case a "worm" that infiltrates the world’s internet service through an online game called Pandora’s Box. As this worm slowly works its way into every government system and shuts down the whole world’s power grid, panic ensures. With it goes the world’s electricity, phones, traffic lights, internet and the security of the world’s nuclear plants, and suddenly chaos is a very real thing as people decide violence is the answer to survive.

As Pandora’s Box offers a countdown of ten days that promises total annulation, our heroine Pandora takes it upon herself, with the help of the two mysterious step brothers next door, to beat the game. The only way it seems to save the world as we know it from ending is to play the game, journeying across the country to find real life clues to solve puzzles at each level online.

As far as I’m concerned, Tracy Deebs has done just enough to really capture my attention with Doomed. Mixing together online gaming with Greek myth in a dystopian setting, nothing was ever over the top with the characters, the storyline and the action all going together perfectly to create a really enjoyable read.

Pandora was a genuinely likable heroine. As a typical teenager who finds herself in the middle of such as catastrophe, Pandora copes as well as to be considered. The world is falling apart and people are beginning to show their true colours, something that doesn’t bode well. Pandora handles herself well; managing to push on as much as possible. Obviously at times she struggles and has her melt downs but in the end Pandora manages to pick herself up, with the help of Theo and Eli, and keep going. I admired that about her and I liked that she truly wanted to help save the world if possible.

As Pandora’s friends and accomplices to her mad dash across the country, Theo and Eli proved to be a nice touch to the story. As two very different, but both very awesome stepbrothers, Theo and Eli certainly won me over. They had a very tedious relationship at times and though they didn’t always get along, I loved watching them interact with Pandora.

Eli was the golden boy; the cheeky, charming guy who managed to keep things light-hearted, even when things were hard. Theo was the preppy-appearing silent type, who seemed to have hidden talent after hidden talent, and whose ability to be prepared managed to get them out of dire situation after dire situation.

There’s the perfect hint of romance in this story. It’s not something overly strong; rather a delicious undertone Deebs explores as Pandora develops different relationships with both boys in Doomed. I don’t want to spoil anything but I will say I’m pleased with Pandora’s ultimate decision, but even then it’s not something you really worry about as the reader as all three of them compliment each other so well as characters.

Filled to the brim with intensity and danger, Doomed truly is a great stand alone novel to read. Though it’s my first novel by Tracy Deebs, I doubt it will be my last and urge you all to add this to your to-be-read pile; you won’t be sorry!

Source: Sent for review by Bloomsbury Australia (Thank you Sonia!)
Format: Paperback
Buy it: Bookworld | The Nile | The Book Depository | Amazon
My Recommendation: This is a great dystopian type read--better than you'll expect!
Cover: It looks better in person than the picture does it justice.
Will I read sequel/continue with series: I'm fairly certain this is a stand alone novel, but I look forward to reading more by this author in the future!