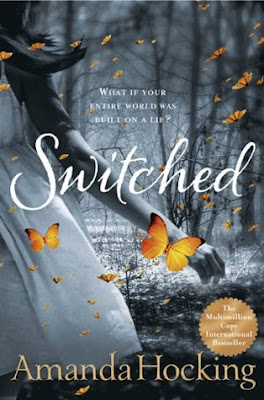 What if your entire world was built on a lie?

Wendy Everly knew she was different the day her mother tried to kill her and accused her of having been switched at birth. Although certain she’s not the monster her mother claims she is – she does feel that she doesn’t quite fit in...

She’s bored and frustrated by her small town life – and then there’s the secret that she can’t tell anyone. Her mysterious ability – she can influence people’s decisions, without knowing how, or why...

When the intense and darkly handsome newcomer Finn suddenly turns up at her bedroom window one night – her world is turned upside down. He holds the key to her past, the answers to her strange powers and is the doorway to a place she never imagined could exist. Förening, the home of the Trylle.

Finally everything makes sense. Among the Trylle, Wendy is not just different, but special. But what marks her out as chosen for greatness in this world also places her in grave danger. With everything around her changing, Finn is the only person she can trust. But dark forces are conspiring – not only to separate them, but to see the downfall everything that Wendy cares about.

The fate of Förening rests in Wendy’s hands, and the decisions she and Finn make could change all their lives forever...

Switched by Amanda Hocking is a gloriously detailed and magical story that introduces readers to a lush world and certainly captivated this reader from the very beginning!

Admittedly it’s taken me a little while to finally read this novel, but having now done so I can finally understand why readers around the world have fallen in love with Switched and why it initially catapulted Amanda Hocking into literacy success. Switched was a fantastic novel to read and I was very impressed with the story Hocking has set up so far. I already own copies of the remaining two novels in the series, so I’m sure to be starting them soon after finding myself entranced and invested in the main characters journey.

Switched follows Wendy Everly, a seemingly normal teenage girl who discovers she is in fact a Trylle changeling who was swapped at birth. When Wendy is attacked by a group of dangerous Trylle known as Vittra, and having had a human “mother” who always knew Wendy wasn’t technically her child and who sought to harm her, Wendy chooses to leave her beloved brother and aunt with Finn, the tracker who has found her and protected her in order to discover her true heritage. Arriving in the Trylle kingdom known as Forening, Wendy soon learns she’s not just any Trylle changeling—she’s a princess; the Crown Princess and the one expected to take over as monarch one day. With the help of Finn and a bunch of friends she makes along the way Wendy slowly realises that there is something going on in Forening, and she may be in more danger from the Vittra than those around her are willing to let on…..

I was really impressed with Switched, and as I previously mentioned, I can see now why so many people seem to adore this series. Well written, Amanda Hocking takes a leap of faith with Switched by staying away from the traditional fey and faerie characters we know in favour of trolls, something I haven’t seen quite as much. Hocking doesn’t delve into the Trylle history too much, but I still find myself eager to know more; if there is more to be known.

Set amongst a lyrical backdrop, Hocking litters the story with intriguing characters, and not just our main character Wendy. Though Wendy is understandably the focal point, Hocking includes some truly personable minor characters; mostly Trylle Wendy meets during her time in Forening, but also her older brother Matt who simply adores Wendy. I loved the characters. Matt, Finn, Rhys, Willa, Tove, Elora....and of course Wendy; I could go on and on. They were that well written, even with some only having small roles within the story. I really hope to see much more of them in future books.

Wendy was a strong heroine to follow and I can only envision how powerful she will become as the series progresses. I liked the way Hocking wrote her character and enjoyed that she had attitude, made honest mistakes and struggled at times. She wasn’t unfeeling, but she wasn’t overtly emotional, and was just the kind of heroine you enjoy in these kinds of novels.

Hocking creates nice relationships between Wendy and those she meets. They’re all different, complex and have different purposes. Wendy’s relationship with her biological mother and of course Finn are focal, and I’m interested to see what happens. I admit I’m a bit spoilt in the sense that I do know who Wendy ends up with romantically at the end of the series, but that doesn’t mean I’m not enjoying her journey and relationship with Finn so far. Amanda Hocking writes it with fire and chemistry and I like that.

A stunning introduction, there’s no doubt Amanda Hocking has me hooked on Switched and eager to dive back into the world of Trylle and Wendy’s journey once more!

Source: Purchased by me
Format: Paperback
Buy it: Bookworld | The Nile | The Book Depository | Amazon
My Recommendation:  I honestly think this is a must read for fans of fae tales, especially those who want a twist.
Cover: It's simple, but very pretty.....
Will I read sequel/continue with series: Yes!