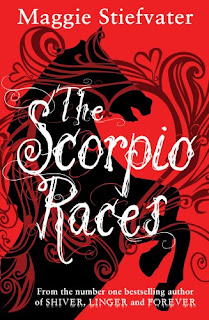 It happens at the start of every November: the Scorpio Races. Riders attempt to keep hold of their water horses long enough to make it to the finish line. Some riders live. Others die.

At age nineteen, Sean Kendrick is the returning champion. He is a young man of few words, and if he has any fears, he keeps them buried deep, where no one else can see them.

Puck Connolly is different. She never meant to ride in the Scorpio Races. But fate hasn’t given her much of a chance. So she enters the competition — the first girl ever to do so. She is in no way prepared for what is going to happen.

The Scorpio Races is a thrilling ride from author Maggie Stiefvater, full of unparallel danger and excitement!

As usual Stiefvater manages to spirit me away to another place with her captivating writing and magical talent of storytelling! Her beautifully written story will entrance you with its uniqueness and its plot will draw you in. This book is unlike anything I’ve ever read before. Rich in danger and excitement, the lore of the capaill uise, the water horses that feature in this story, is spectacular. The capaill uise are like nothing I’ve ever read about before. Forget sweet, innocent creatures of the sea, these horses are man-eaters, untamed and wild, born of the ocean and not meant to be tamed. And yet people do. Year after year, brave and somewhat suicidal men capture these creatures and train them all in an effort to enter a little race known as The Scorpio Races.

I found the world created in this book to be very interesting, although at times I wished for more explanation about its location and background. The small island town of Thisby blends together perfectly the world of sport horses and water horses that reside in it, as well as the town of people who live there. Stiefvater creates a fantastic cast of minor characters to populate her world and give it flair while focusing on her two main leads. Sometimes the story seemed to lag to me, perhaps because we weren’t getting straight to the races, but I didn’t feel bored.

While this is a story of water horses and the race they dominate, I feel like it is so much more than that. The actual Scorpio race itself spans merely a few pages at the end of the book, with the entire book being a climatic build up and voyage into the lives of two Thisby residents. As a reader we’re drawn intimately into the lives of Puck and Sean and the book focuses heavily on their lives and the struggles they face both inwardly and outwardly as they prepare to participate in the race, both for very different reasons.

Puck is a very brave young woman. Entering the race in a desperate desire to find a way to keep her family together, she’s seriously in over her head. With no experience in the race and without a capaill uise horse herself, she takes a real risk in participating. When her winning the race becomes a much more necessary thing, Puck needs to find strength in herself more than ever before. I really liked Puck. No one really wants her in the race, for various reasons, but she stands tall, never letting it make her back down. I felt Stiefvater wrote her beautifully and she managed to hold her voice in the town of Thisby. She grows as she finds friendship with Sean and I found her easy to like.

Sean Kendrick is a real intriguing character. Able to tame the water horses as much as anyone ever could, he understands these beasts and loves them for exactly what they are. He never changes them and I found him to be a really complex character. He knows what these man-eaters are, knows the dangers they posses, perhaps more than anyone and yet he loves them regardless. The bond he shares with his capaill uise stallion Corr is an enigma; as intriguing as it is odd. Personally, I’d never wanna be in the presence of these creatures, but he thrives there. There was something so magical about Sean himself. His calmness admist all the danger and his ability to stay relaxed, drew me to him as much as he drew Puck. He was one with the ocean, as part of the sea as he was the land.

The romance that develops between Puck and Sean isn’t an overwhelming theme throughout the book. Unlike most of Maggie’s other books, it’s a nice undertone that blends in with the rest of the story. Puck and Sean don’t need each other exactly, rather find comfort and friendship in each other in the lead up to the race that eventually leads to more. Sean is somewhat lonely, only ever connecting with his horse Corr and Puck has never had someone believe on her and take a chance on her the way Sean does.....it’s sweet. Their relationship never seems to fast or forced and it doesn’t feel too strong for the story. It fits in perfectly.

There is a lot of violence in this book, but I feel it only adds more authenticity to the tale. The never ending danger the horses possess and the things they do, never allow you to forget exactly what these violent creatures are. They’re not meant to be corralled or domesticated, instead belonging to the sea.

The ending is very sweet and fitting to the story, but I couldn’t help but be left with some unanswered questions. Perhaps that’s just me, but considering this is one of Maggie Stiefvater’s books, I should be used to that. It ties up well, with possibilities for the characters and you’re left with a feeling of hope.

The Scorpio Races is a fantastically thrilling read that never lacks for danger and adventure, a book that will have you on the edge your seat when the action picks up and on your toes the entire way through.

Source:I Bought.
Format: Paperback
Recommend: Yes.
Recommend borrow or buy: Buy it.
Cover:Hmmmm, it's nice, but it doesn't "capture me".
Read sequel/continue with series: This is a stand lone, but I thoroughly recommend any and all of Maggie Steifvater's books!