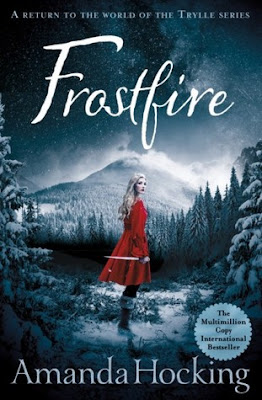 Will she give up her dream to follow her heart?

Bryn Aven is determined to gain status amongst the Kanin, the most powerful of the hidden tribes. But as a half-blood, winning respect is a huge challenge. Bryn's almost-human community distrusts people, and those from other tribes are almost as suspect.

She has just one goal to get ahead: to join the elite guard protecting the Kanin royal family. And Bryn's vowed that nothing will stand in her way, not even a forbidden romance with her boss, Ridley Dresden.

But her plans are put on hold when fallen hero Konstantin starts acting dangerously. Bryn loved him once, but now he's kidnapping Kanin children - stealing them from hidden placements within human families. She's sent to help stop him, but will she lose her heart in the process?

Frostfire is the first novel in Amanda Hocking’s Kanin Chronicles and catapults readers back into her intricate and beautiful world of the Trylle. Exploring a brand new branch of this dynamic world, Frostfire introduces readers to a kick-ass new heroine and a brand new tale to sink their teeth into!

After enjoying the Trylle series, I was very excited to head back into Amanda Hocking’s world, and not only did I enjoy myself, but I actually found myself loving Frostfire more! Throughout Trylle we followed Wendy who was a changeling, whereas in Frostfire our main character is actually a tracker; tasked with finding and returning changelings to the Kanin. We’ve reversed roles and now get to see the other side of the fence, which when added to the new tribe we’re getting to know, makes for some awesome reading.

Frostfire follows Bryn Aven, a blonde haired, blue eyed tracker from the Kanin tribe. As a half-breed, Bryn has spent her years fighting for a place in Kanin’s elite Hogdragen guard and has had to prove herself time and time again thanks to her mixed blood. Despite this, Bryn is one of the best trackers the Kanin have, and when a traitor by the name of Konstantin Black resurfaces and starts attempting to kidnap changelings Bryn finds herself setting out to discover what Konstantin is up to. Sporting a history with Konstantin, Bryn has a vested interest in bringing Konstantin down, but quickly begins to questions whether everything is as it seems……

Though I really loved the Switched books, there’s something about Frostfire that captivated me in a stronger manner than Switched did. Perhaps it’s because it reminds me of Richelle Mead’s wildly popular Vampire Academy series in some aspects (a series I highly adore, I might add!) but the aura, setting and feel of Frostfire just caught my absolute attention from the opening page and refused to let go.

Frostfire is fast paced and exciting and blends everything I loved about the Trylle world with the new world of the Kanin. Set around six years after the first series, Frostfire incorporates old characters with new; Ember and Flynn make appearances within the story as do Tove and Bain towards the end, with Ember the best friend of our now heroine Bryn. I loved being introduced to new and vivid characters, and found myself really liking the Kanin world. Though it’s not too different from the Trylle world we saw with Wendy, following Bryn allows you as the reader to see a whole new side of their society. And I’m even more excited to discover more of it.

Bryn isn’t a changeling and she isn’t wealthy; she’s just hard working and a real fighter. As a tracker, it’s Bryn’s job to find changelings and bring them home; something she’s very good at. Bryn comes across as a strong individual and is actually quite kick-ass. She has a strength in her personality Wendy didn’t have at the start in the last series, and as someone who adores fierce heroine’s, Bryn really appealed to me. I really appreciated that Amanda Hocking gave her a soft and feminine side too, but still ensured she stayed that fighter she first appears to be. I honestly can only envision where Hocking plans to take her as a character and a woman as the series progresses….

The romance within this story is very different than that within Switched and I have to say I’m liking what I see so far. Bryn finds herself in a position where she begins to find herself attracted to her boss Ridley and it soon becomes clear to her that her feelings for him are very real. Bryn and Ridley have been friends for a long time, and from this comradeship seems to be a lot of sexual tension. Ridley clearly feels about Bryn the way she does for him, and it’s a slow simmer that burns between every shared moment between them; something they are neither ready to face or act on in the beginning of the story. I’m really looking forward to seeing them develop and hopefully become a couple; fingers crossed Hocking doesn’t turn them into a love triangle though because I'm very over them.

My only issue with this novel was the ending. I didn’t feel like we’d had a resolution to the conflict going on within the story. Perhaps that is because everything that is currently happening is part of a bigger picture, but I still would have liked some sort or closure on this part of Bryn’s story from Hocking. Still, mystery, unknown and plenty of occurrences keep me eager to find out what will happen next!

Rich, exciting and really addictive, Frostfire is a promising start to the Kanin Chronicles that leaves me eager to pick up the next book pronto!

Source: Sent for review by Pan Macmillan Australia (Thank you Alana!)
Format: Paperback
Buy it: Bookworld | The Nile | The Book Depository | Amazon
My Recommendation: Paranormal and fantasy fans will love this.
Cover: This cover is so incredibly beautiful. The background is stunning and the cover model is exactly how I picture Bryn!
Will I read sequel/continue with series: Yes!