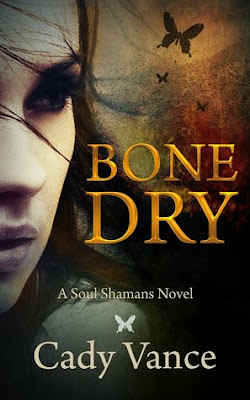 Sometimes it isn’t as easy as choosing right or wrong.

Sixteen-year-old Holly Bennett is a comic book nerd, a con artist, and a shaman. Most days Holly wishes she could trade in her power of spirit communication for something more useful--like fireballs or Wolverine claws. She knows spirits aren't exactly Casper the Friendly Ghosts. They're dangerous beings from Lower World who snack on human life, and messing with the magic from their world is an express ticket to big trouble. But when a shaman sticks her mom's mind between their world and ours, Holly becomes the unexpected breadwinner in the family. She uses her burgeoning shaman powers to set up fake hauntings and "banish" the so-called ghosts from her wealthy classmates' bedrooms. For a fee, of course.

When actual spirits start manifesting, Holly discovers that other shamans have come to town, summoning life-sucking spirits for their own ends. And the newcomers may just hold the clue Holly's been looking for--the one that can release her mom's mind from its Lower World prison. With the help of both a cute web comic artist and her partner-in-con, Holly plots to take them down, throwing her into a whirlwind of speedboat getaways, breaking and entering, and astral projections into the spirit world. And as her mom's mind slips further away, Holly has to fight to save her, and the rest of the town, before they get sucked into Lower World permanently.

Bone Dry by Cady Vance is a sharp and visually entertaining novel that follows a likable heroine and weaves together intriguing elements of shamans I’ve yet to see in this fun read that will keep you easily entertained!

Bone Dry introduces readers to Holly, a sixteen year old girl who comes from a long line of shamans and whose life changed drastically when her mother was left a shell of her former self during a shaman job gone wrong. Taking care of her now mentally troubled mother, Holly is now responsible for paying the bills, making sure they’re fed and still has to go to school and be a normal teenager. Making most of her money from banishing “spirits” from the homes of her fellow schoolmates, Holly is shocked to discover that one of the hauntings isn’t the work of her and her best friend like normal. Other shaman have made their way to Holly’s small town and they’re meddling in dark and dangerous magic; magic Holly is going to have to fight if she wants to keep the spirits from hurting, or killing, those that exist around her.

Nicely written, Bone Dry is highly entertaining. Cady Vance sets up the first novel well and leaves a lot of potential for where Holly and her friends can go. The idea of shamans was interesting—not something I’ve really seen before, and I enjoyed how Vance wove demons, spirits and magic together to create her mythology.

Holly very much presents as a capable teenager and is very much the teen sleuth. Throughout Bone Dry, she attempts to put clues together to solve the mystery around what really happened to her mother whilst banishing the spirits that seem to be plaguing her schoolmates. Holly’s investigations make for some interesting reading as she and her best friend team up before Holly finds unexpected assistance from Nathan—the comic book slash popular guy at school who suddenly makes it clear he may like Holly as more than a friend.

I found Holly to be quite likable and I loved her relationship with Nathan. Nathan came across as very down to earth and funny and he and Holly had great chemistry. It was very sweet seeing them find their feet together and begin an endearing romance. The geekiness they both displayed was adorable at times and I liked that they seemed to complement each other—very cute!

Perfect for fans of Rachel Vincent’s Soul Screamers, Bone Dry ended before I was really ready for it to. And with the bad guy managing to effectively get away, Cady Vance left me ready for more and ready to see what’s in store for Holly next!

Source: Sent for review by the author (Thank you Cady!)
Format: Kindle ebook
Buy it: Amazon
My Recommendation: I honestly think this series is erfect for fans of Rachel Vincent’s Soul Screamers
Cover: It's nice--I enjoy the warm colours.
Will I read sequel/continue with series: Yes, I'd like to see more of Holly.