Book Shelf: The Guy, the Girl, the Artist and His Ex by Gabrielle Williams 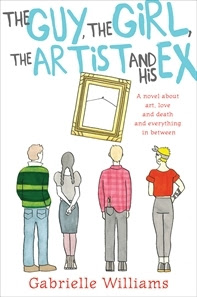 An artist with attitude.

A girl with a past.

Four lives collide when one of the world's most famous paintings is stolen. It's a mystery that has the nation talking, but while Picasso's Weeping Woman might be absent from the walls of the National Gallery, in other parts of Melbourne the controversial painting's presence is being felt by Guy, Rafi, Luke and Penny for four very different reasons.

Life, love, art and one giant party intersect in this offbeat comedy about good intentions, unexpected consequences and the irresistible force of true love.

The Guy, The Girl, The Artist and His Ex is a story that sees the lives of four very different individuals intertwine and explores different aspects of human nature in this latest novel by Gabrielle Williams.

I want to be honest here; despite my lower rating, The Guy, The Girl, The Artist and His Ex wasn’t in any way a bad book….it’s just not my exact kind of read. Yet in saying that, I have made a pact with myself to read more Australian fiction by Australian authors this year so I don’t regret reading this.

Set in Melbourne, Australia in the 1980’s, The Guy, The Girl, The Artist and His Ex is told through the eyes of four different people. Seventeen year old Guy, a teenage boy who is just looking to finish school without disappointing his parents, seventeen year old Rafi, a Spanish teenager who struggles to take care of her mother, mentally affected by the loss of her young son years before and struggling with reality, Luke a promising and rebellious artist who has been involved with one of the art thefts of the decade and Penny, Luke’s ex-girlfriend and mother of his child who is attempting to move on with her life.

Unbeknown to the foursome, all their lives are about to intersect over the course of one disastrous night that will change them all forever, where hard choices are made and lives are on the line.

The Guy, The Girl, The Artist and His Ex is a solid fiction novel. While it didn’t blow me away I can certainly see what author Gabrielle Williams was going for with this story and for the most part I found it entertaining….I simply found myself not as invested as I would have liked. And yet, I think William’s did a fantastic job weaving the characters’ lives together the way she did in such a simple, natural way. All four voices were different and unique and the everyday feel of the novel went well with the idea that Picasso’s Weeping Woman painting has been stolen by one of the main characters and people he knows.

Personally I wasn’t impressed by Luke and his attitude towards everything in general, not to mention how he treated his ex and his son, but I genuinely liked Guy, Rafi and Penny. They were easy enough to follow and I was hoping for the best possible outcomes for their stories.

Easily written and woven together beautifully, The Guy, The Girl, The Artist and His Ex is a readable novel, that whilst it didn’t blow me away would be a sure hit with a lot of Aussie fiction lovers and most readers in general. Try it—you may just find you love it!

Source: Sent for review by Allen & Unwin (Thank you guys!)
Format: Paperback
Buy it: Bookworld | The Nile | Amazon
My Recommendation: Fans of contemporary and Aussie fiction will enjoy this.
Cover: Doesn't do anything for me.....
Will I read sequel/continue with series: This is a standalone novel, but I wouldn't rule out reading more by this author.