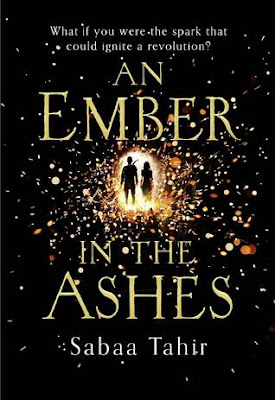 Set in a terrifyingly brutal Rome-like world, An Ember in the Ashes is an epic fantasy debut about an orphan fighting for her family and a soldier fighting for his freedom. It’s a story that’s literally burning to be told.

What if you were the spark that could ignite a revolution?

For years Laia has lived in fear. Fear of the Empire, fear of the Martials, fear of truly living at all. Born as a Scholar, she’s never had much of a choice.

For Elias it’s the opposite. He has seen too much on his path to becoming a Mask, one of the Empire’s elite soldiers. With the Masks’ help the Empire has conquered a continent and enslaved thousands, all in the name of power.

When Laia’s brother is taken she must force herself to help the Resistance, the only people who have a chance of saving him. She must spy on the Commandant, ruthless overseer of Blackcliff Academy. Blackcliff is the training ground for Masks and the very place that Elias is planning to escape. If he succeeds, he will be named deserter. If found, the punishment will be death.

But once Laia and Elias meet, they will find that their destinies are intertwined and that their choices will change the fate of the Empire itself.

In the ashes of a broken world one person can make a difference. One voice in the dark can be heard. The price of freedom is always high and this time that price might demand everything, even life itself.

An Ember in the Ashes by Sabaa Tahir is a thoroughly entertaining and impressive debut novel that draws readers into a powerful and dangerous world and follows two strong leads whose lives intertwine with deadly consequence.

In the tradition of ancient Rome, An Ember in the Ashes depicts a brutal and dangerous society where defiance usually means death and those in power dominate those of lesser stations. In a world where the Martial Empire long ago defeated and enslaved the Scholar people, An Ember in the Ashes follows and is told through the eyes of two very different individuals; Laia, a slave and Elias a solider.

When Laia’s remaining family is slaughtered and her only surviving relative, her brother is imprisoned for treason, Laia sets out to find a way to save him from execution, even when it means she must take a position as a slave and spy on the Commandant, a barbaric and heinous woman who runs a training school for Masks, the most fierce and deadly of Empire soldiers. Elias on the other hand is a Mask in training; one of the best and a student under the Commandant. However Elias has a secret; he loathes everything the Empire stands for and has plans to desert. As Laia and Elias’s lives begin to intertwine, the two begin a dangerous journey that will see them make tough choices and push the boundaries of their world like never before.

An Ember in the Ashes is actually a really interesting book. Author Sabaa Tahir has clearly thought really hard and put a lot of work into detailing her complex world. The society within An Ember in the Ashes is a mix of ancient Rome with a hint of dystopia; there is magic, evil and many secrets to be discovered within. There’s so much unknown within this tale and I like that I still feel like there’s so much to be discovered.

Tahir details an intriguing world of magic, danger and war in An Ember in the Ashes. There’s almost a medieval feel to it at times, and this blends well with the developing storyline as well as the main characters and the minor ones to create a very engrossing read. The storyline is still clearly developing but Tahir has won me over with the mystery surrounding her main characters destinies and their purposes. Powerful wise men known as Augurs hint at a bigger picture for both Laia and Elias and I for one cannot wait to discover what that may be.

I really loved Laia and Elias as characters. They’re both solid individuals and have their own personalities, fears and flaws. They both want more from life and are slowly discovering their individual limits. From different worlds, it takes a while for their lives to intersect, but Tahir sets a good foundation and gives them both purpose. They both have different wants and desires, but it’s seeing them find their common goals amidst the undeniable attraction between them despite their different positions in life that cements the fact they could do so much together.

Considering, Elias and Laia are obvious love interests for each other, there isn’t an actual love triangle within An Ember in the Ashes; it’s more a love square. There’s no denying there’s an attraction and appeal between Elias and Laia, but they also both have deep, and very real, feelings and connections with other people. It’s odd…..seeing them with their respectable love interests, you feel the relationships and the desire. They both burn so deeply and you honestly feel these two individual romances and the possibilities they present. But then Laia and Elias are together and you can’t help but feel like they should be together. It’s confusing emotionally and you don’t know who to get behind, but Sabaa Tahir writes this all so well that I honestly feel at this point they could be with each other, or the others they care about and it would just work.

Even after finishing the final page of this novel I’m still very caught up in the story. An Ember in the Ashes races towards a stunning conclusion that leaves the story set up beautifully for the sequel. Sabaa Tahir has created a dark, brutal world of magic, creatures and possibilities, and I for one cannot wait to see what happens to Laia and Elias next!

Source: Sent for review by Harper Collins Australia (Thank you guys!)
Format: Paperback
Buy it: Bookworld | The Nile | The Book Depository | Amazon
My Recommendation: Fans of fantasy are sure to love this, although it's hard to compare it to anything else.
Cover: I'm not the biggest fan of your Australian cover; I don't think it really doesn't the novel justice.
Will I read sequel/continue with series: Yes! Can't wait.