Book Shelf: Of Sea and Stone (Secrets of Itlantis #1) by Kate Avery Ellison 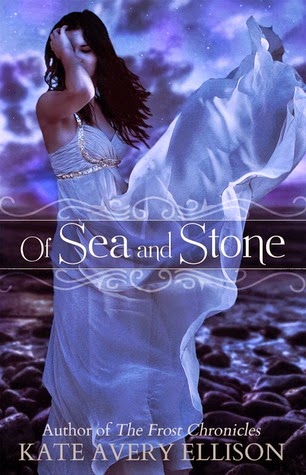 All her life, clever Aemi has been a slave in the Village of the Rocks, a place where the sea and sky meet. She’s heard the stories about the fabled People of the Sea, a people who possess unimaginable technology who live below the waves in the dark, secret places of the ocean. But she never dreamed those stories were true.

When a ship emerges from the ocean and men burn her village, Aemi is captured, and enslaved below the waves in Itlantis, a world filled with ancient cities of glass and metal, floating gardens, and wondrous devices that seem to work magic. To make matters worse, her village nemesis, the stuck-up mayor’s son Nol, was captured with her, and they are made servants in the same household beneath the sea.

Desperate to be free, Aemi plots her escape, even going so far as to work with Nol. But the sea holds more secrets than she realizes, and escape might not be as simple as leaving...

Of Sea and Stone is the first novel in Kate Avery Ellison’s Secrets of Itlantis series and is a wonderfully woven together fantasy tale that proves to be a delightful twist on the underwater classic we’re all very aware of!

Of Sea and Stone follows Aemi, a slave within the Village of Rocks. Though she is intelligent and capable, Aemi spends her days tending to her masters every whim and dreaming of being free. An orphan after the death of her mother, Aemi hopes to one day travel to her mother’s homeland, a mysterious place known as Perilous. When her village is attacked, Aemi is taken hostage alongside a group of young men and soon she discovers that all the stories she has heard about a group of mystical people who live underwater are true. And as Aemi is taken deep underwater to a city she never dreamed existed, she discovers that in order to have any chance at escaping she’ll have to rely on all the intelligence and wit she has, whilst pairing up with her sworn enemy, a boy from her village that Aemi cannot stand…..

I have to say I really enjoyed this novel. Of Sea and Stone has all the makings of a great fantasy tale and managed to capture my attention from the very beginning. Author Kate Avery Ellison’s writing is descriptive and paints a wonderful picture of both the undersea world and Aemi’s home on land. I was thrilled to discover that this novel didn’t feature a single selkie, mermaid or sea creature and instead introduces readers to a society who have managed to make a home under the water through a series of buildings, constructions and gardens that are all housed within glass and are completely self-sustaining—ensuring the people who live within this society are able to survive, travel between and live amongst the various cities that make up this under water world.

With Of Sea and Stone featuring such a beguiling world within its pages it’s lovely to find that the heroine is someone who is genuinely easy to follow. Aemi is a simple girl who is vastly intelligent and competent and who can hold her own within a dangerous world despite her lowly station. Aemi is sharp and quick thinking and I appreciated her love of learning. She was honestly just easy to follow and I enjoyed her growing relationships with those around her.

Of Sea and Stone is part romance, adventure and is actually a story of friendship as Aemi begins to develop friendships with those she works for, and with, during her time in Itlantis. There’s the tiniest hint of romance within the novel that romantics such as myself will eat up and plenty of revelations and discoveries towards the end of the novel that set up the next book nicely.

Excellently paced and exciting, Of Sea and Stone is a great start to a promising series and I can’t wait to read more!

Source: Sent for review by Xpresso Book Tours and the author (Thanks ladies!)
Format: Kindle ecopy
Buy it:  The Book Depository | Amazon | Barnes & Noble | Smashwords
My Recommendation: Fantasy fans will love this.
Cover: I think the cover is beautiful and I especially love the color.
Will I read sequel/continue with series: Yes. I'd love to read more.....