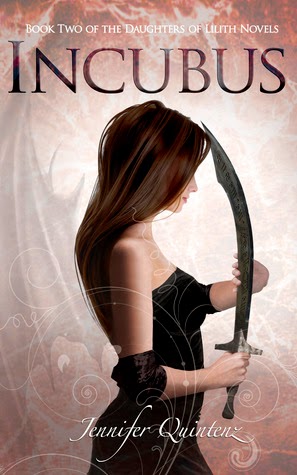 Braedyn Murphy used to think nothing important ever happened in her sleepy town of Puerto Escondido. But that was before she learned she was a descendent of Lilith, the mother of all demons. Now Braedyn fights to protect humanity from the Lilitu - the beautiful, souls-stealing daughters of Lilith.

As she fights the Lilitu, Braedyn must also fight her growing love for her boyfriend Lucas - because even a simple kiss could end his life. Their only ray of hope is an angel’s offer to make Braedyn human, but it’s an offer she can’t accept until the world is safe from the Lilitu.

Braedyn knows she’s a key player in this ancient war... but she’s not ready to believe she just might be humanity’s best hope of surviving the final battle for Earth.

Incubus is the second book in Jennifer Quintenz’s Daughters of Lilith series and is quite possibly even better than the first book! The stakes are higher and there’s a new danger to face as Braedyn and the Guard continue their fight against the Lillith in another exciting read by Quintenz!

I have to say I really enjoyed Incubus; possibly even more than the first book! With Quintenz’s world already established and the characters well known by now, I was thrilled with how the story is progressing and the developments that have come to light in this book. Sometimes sequels don’t live up to their predecessors; however Incubus manages to stand exceptionally well on its own two feet with its own individual story that still manages to feature an ongoing storyline from the previous book.

As with the previous book in this series, Incubus was very well written and author Jennifer Quintenz manages to pack a lot of action and surprises into the story. The tale is well written and the characters compliment each other beautifully. The introduction of some new characters to that story shake the foundation, but Quintenz explores them expertly; managing to include many unexpected developments.

Braedyn continues to grow and strengthen in her fight against the Lilitu, making some bad choices along the way that may affect not only those around her, but possibly the whole world. Personally I like Braedyn and I like seeing her face things head on. Admittedly she makes some tough choices in this book, some of which have horrendous results, but she’s learning and you can’t fault her desire to do the right thing.

Braedyn’s relationship with Lucas continues to be a focal point within the story considering they are still unable to act on their feeling without Lucas being tremendously hurt, or worse, killed. Quintenz continues to showcase a great relationship between Braedyn and her father Murphy and I’m even quite a fan of the unexpected friendship/alliance Braedyn has formed with Karayan—this was not something expected after her actions in the previous book, but Quintenz is beginning to depict a different side to Karayan that makes me wonder just how evil she really is.

Shocking betrayals and unexpected revelations see Incubus end with an unforeseen cliff-hanger that readers will simply not expect but will leave them raring to dive into the third instalment as soon as they’re physically able!

Source: Sent for review by the author (Thank you Jennifer!)
Format: Kindle ebook
Buy it: The Book Depository | Amazon | Barnes & Noble
My Recommendation: This is a great YA series that is definitely worth a read!
Cover: I think it's wonderful
Will I read sequel/continue with series: Yes!