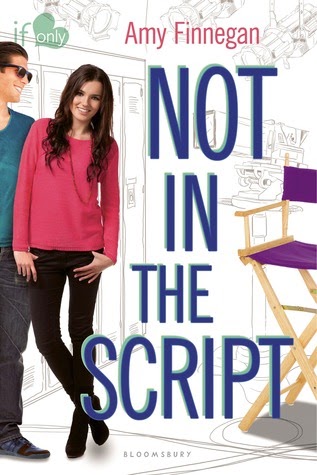 Millions of people witnessed Emma Taylor’s first kiss—a kiss that needed twelve takes and four camera angles to get right. After spending years performing on cue, Emma can’t help but wonder if any part of her life is real anymore . . . particularly her romances. She’s been burned by heartthrobs (and the press) one too many times, but there’s something about Emma’s co-star on her new TV show Coyote Hills that is irresistible. Jake Elliott is gorgeous, smart and actually cares about Emma’s charitable foundation. But she’s sworn off on-set relationships. They always end badly . . . don’t they?

This third novel in the deliciously fun If Only romance line proves that the best kinds of love stories don’t follow a script.

Not In The Script is the third novel in the If Only series, this time written by debut author Amy Finnegan and is a super adorable and seriously addictive Hollywood tale that features two amazing leads and a romance that is without a doubt swoon worthy!

Emma Taylor is a talented and resourceful Hollywood It Girl whose life takes an interesting turn when she steps into a new role on a hot up and coming new teen show. Excited to be working alongside her longtime crush, the last thing Emma expects is to find herself drawn to, and soon falling for, a different co-star than the one she once dreamed about. As a successful magazine and runway model, Jake Elliott is known around the world for his handsome face and perfect body, but it's the chance to try his hand at acting that offers him his biggest opportunity yet. Who cares if he's never acted before? Coyote Hills is sure to be a hit and as part of a stellar cast, Jake knows how much the role will help his family. If only he could stop thinking about his gorgeous co-star Emma.

But when the two finally give in to their undeniable attraction and start a secret relationship, both Emma and Jake discover that sometimes on-set romances don't necessarily end badly, if only they could out last the public storm surrounding each of their lives.....

Not in the Script is a seriously addictive and delicious read! As a behind the scenes look into Hollywood life, author Amy Finnegan draws her readers into the scandalous world of acting, tabloids and Hollywood drama, all the while weaving together a believable and adorable romance between two people who connect beautifully!

Unlike the other two novels in this series, and I use the word series loosely because each If Only novel is written by a different author and is a complete standalone tale, Not in the Script is the first book to be told through the POV's of both main characters--something I simply adore.d Heroine and love interest both have stories to tell; something that enhances the reading experience as you as the reader see through both Emma and Jake's eyes.

Emma and Jake are both very down to earth characters. Emma has been in the public eye since she was twelve, and as an eighteen year old who is living on her own and working in a cut throat world where her every move is scrutinized, Emma has managed to maintain her rationality and sense beautifully. She's a very normal girl, and despite her beauty and fame has not let it change her, something made obvious by Emma's desire to help her best friend Rachel at every chance she gets and her desire to open a foundation to help those who need it.

And Jake on the other hand is a guy through and through. He goofs off with his friends, makes jokes and plays the occasional game of soccer using paper cups with the other actors on set. He's stunningly good looking and definitely lives up to his nickname as "The Bod", but Jake is also a genuinely down to earth guy who would do absolutely anything for his family. There's something so enticing about a man who loves his mum the way Jake does in this novel. Can anyone say swoon?

Emma and Jake have a really endearing relationship. Emma is hesitant to start anything with Jake due to her horrible history with co-stars and a crush by someone that makes things harder, so in the beginning, Emma and Jake really start out as friends only. However that changes as they seamlessly transition into two people in a relationship. Jake sees past all of Emma's fame and fortune to the girl she is at her base and Emma sees past Jakes looks to see the incredible guy he is. They're funny and flirty together and have a great chemistry. Basically I was rooting for them the whole time and paparazzi be damned, I wanted them to prove them all wrong.

Amy Finnegan gives Emma and Jake a great cast of characters to interact with in this novel with everyone from Emma's amazingly cute family to Jake's best friends and his amazing mother giving the novel such life. Emma and Jake discover new friends, and occasionally enemies on the set of Coyote Hills with their director and their co-stars making for some entertaining reading.

Smile inducing and insanely sweet, Not in the Scrip blends the ins and outs of Hollywood perfectly together with family, friendship and true love--Amy Finnegan hits the nail on the head and left this reader extremely satisfied....although I'd certainly love a companion novel with Kimmi in the future!

Source: Sent for review by Bloomsbury Australia (Thank you guys!)
Format: Paperback
Buy it: Bookworld | The Nile | The Book Depository | Amazon
My Recommendation: This is a fantastically fun contemporary read!
Cover: I think the cover is super cute and sweet--just like the story....
Will I read sequel/continue with series: This is a standalone novel but I look forward to more by Amy Finnegan in the future!