Book Shelf: Demon from the Dark (Immortals After Dark #10) by Kresley Cole 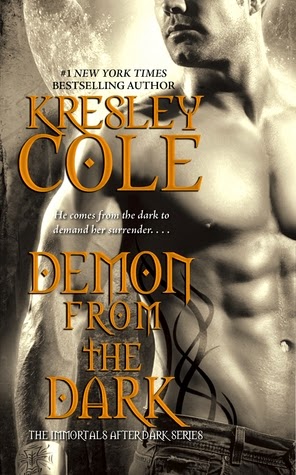 From New York Times bestselling author Kresley Cole comes this scorching tale of a demon outcast poisoned with vampire blood and the vulnerable young witch he vows to protect, even from himself.

A DANGEROUS DEMON SHE CAN'T RESIST . . .

Malkom Slaine: tormented by his sordid past and racked by vampiric hungers, he's pushed to the brink by the green-eyed beauty under his guard.

A MADDENING WITCH HE ACHES TO CLAIM . . .

Carrow Graie: hiding her own sorrows, she lives only for the next party or prank. Until she meets a tortured warrior worth saving.

TRAPPED TOGETHER IN A SAVAGE PRISON . . .

In order for Malkom and Carrow to survive, he must unleash both the demon and vampire inside him. When Malkom becomes the nightmare his own people feared, will he lose the woman he craves body and soul?

Demon From The Dark is another exciting book in the Immortals After Dark series and another sexy romance from one of the premier names in Paranormal Romance!

Picking up shortly where the last book left off, we're introduced to The Order, the mysterious group of humans who were behind the kidnapping of the various main characters we were made aware of in the last book. Cole develops her world even more in this installment and I'm quite intrigued to see what will happen with The Order next.

I have to admit, I was a little bit unsure of this book in the beginning and unfortunately that was mostly because of Malkom and his actions. In the very beginning of the book I struggled to connect with his brusque nature and attitude. It was hard to accept his way of thinking and I almost found him unlikeable because of this. And yet once I became familiar with Malkom and his history, it was easy to become used to his gruff, almost animalistic was of thinking and I couldn't help but feel for the guy. For someone so fierce and tough, he was surprisingly fragile when it came to his psyche and his ability to trust. He got to me. He did. His second guessing himself as he quietly learnt that others could deem him worth something tugged at my heart strings.

Carrow was quite a nice female lead; likable and brave when need be, and I liked her both as an individual and together with Malkolm. Carrow wasn't the party girl I'd expected from previous brief glimpses within the series and the mothering instinct that came to the surface in her when Ruby became her responsibility was adorable.

Together Malkom and Carrow had a really tough relationship. They had a language and cultural barrier to break through between them and I quite liked exploring this. It made for some interesting reading, especially with Malkom's nature and experience within the world. Theirs was a very instinctual relationship and yet Malkom's inexperience warred with his fierce urge to "claim" Carrow from the get go.

High stakes and a great setting add to the experience of this book, as does the little witch Ruby which bring out the paternal instincts in both Carrow and Malkom. Malkom and Ruby's slow decent into friendship was the most adorable thing ever and the sweet moments between them added the cherry on the top to this story.

With a great ending, I'm really glad to have read this installment and yet very excited for the next!

Source: Bought by me through The Book Depository
Format: Paperback
Buy it: Bookworld | The Nile | The Book Depository | Amazon
My Recommendation: A PNR must read
Cover: Very sexy.
Will I read sequel/continue with series: Yes......