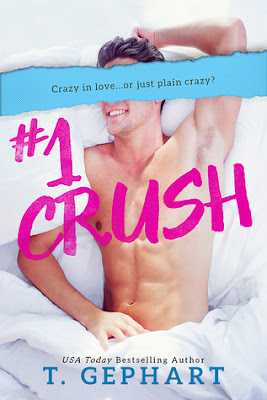 Tia Monroe was smart, sassy and successful. Sure, she could get a little crazy at times—life around Tia was never boring—but that was part of her appeal. And while she didn’t see herself as ‘classically beautiful’, she had no shortage of options in the boyfriend department. She just hadn’t found one who held her interest.

Until she laid eyes on Eric Larsson, and then it was lust at first sight.

He packed the perfect mix of smoldering sexy and unapologetic cool into his blond-haired, blue-eyed, ridiculously hot six-foot-four frame. One smile from him was enough to twist her insides, making her girlie bits tingle in the most delicious way. But it wasn’t just his looks, he was smart and funny—charming in the most a-dork-able way.

The only problem was . . . Tia had never actually met him.

Eric Larsson was one of Hollywood’s hottest movie stars, rising to the top of his game and leaving a trail of disintegrated panties in his wake. Tia’s were no exception—but she wasn’t delusional. Love, marriage and happily-ever-after were not part of her fantasy; she just wanted to meet him. Just one time. One time. Confident that just seeing him in the flesh would get him out of her system.

So, with her resolve steeled, Tia set off on a quest to make it happen while avoiding her mug shot being splayed across the five o’clock news.

The journey no doubt will make for one hell of a story.

#1 Crush is the first novel in Australian author T. Gephart’s #1 series and is perfect for anyone who’s ever fantasised about meeting their celebrity crush, drawing readers into a hilarious, romantic rom-com you can't help but love!

New York columist Tia Monroe is smart, successful and known for her crazy antics and endearing sass. All that's missing from her life is a special someone and although Tia was never without options in the boyfriend department, she hadn't found someone who held her interest. Until she laid eyes on Eric Larsson and fell in lust at first sight that is. The blond haired, blue eye stunner with the towering frame and body to die for managed to get Tia's insides in a mess with one panty melting smile. The only problem was that Tia hadn't actually met Eric....oh and he also happened to be one of Hollywood's hottest stars. With her crush on Eric commandeering so much of her life, Tia decides to takes drastic action; she's going to find a way to meet Eric and hopefully prove to herself he wasn't everything her mind had made him up to be. But when Tia meets her #1 Crush, is she about to discover that Eric is even more amazing than she first thought?

Sexy and thrilling, #1 Crush was an absolutely adorable read and so much fun! T. Gephart has created the ultimate dream of anyone who has ever secretly--or not so secretly--crushed on a celebrity and she does so with a sexy, swoon-inducing romance that will hold you captivated until the very end. This is the kind of contemporary romance I love best; humorful, endearing, sexy and downright fun.

Tia and Eric were both wonderful characters who have so much chemistry together. The protagonist of #1 Crush Tia is sassy and crazy but also very likable and easy to follow, while love interest Eric could quite possibly be the perfect man. Honestly; sizzling good looks aside, he was charming, sweet, cheeky and down to earth. His fame and fortune having not gone to his head thanks in part to his best friend Ryan who has kept him grounded and his own good nature.

T. Gephart writes a brilliant romance between Tia and Eric that includes a lot of hot and steamy sex and calm, endearing moments between the two of them as they fall in love. The sex scenes in this novel were perfect--steam inducing and sexy while not making me feel like I was reading the same scene over and over again either. Tia and Eric had a great chemistry and I thought they were very electric together.

I'm so excited to read more of this series. The supporting cast was brilliant and I'm highly excited to reading Lila and Ryan's story as well as one's that feature Eric's brothers down the track. I have no doubt they're going to be as good as this first one and if #1 Crush is any indicator, T. Gephart is sure to rock my socks off with whatever she releases next!

Source: Purchased by me
Publisher: T Gephart
Format: Paperback
Release Date: February 20th 2017
Purchase: The Book Depository | Amazon | Barnes & Noble | Kobo
Final Thoughts: I really enjoyed this novel--it had the feel I've come to associate with a Kylie Scott  novel---which I love----so I'll be keen to read the rest of the series!