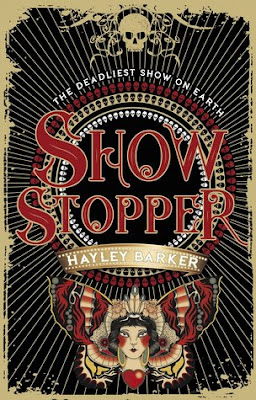 Set in a near-future England where the poorest people in the land are forced to sell their children to a travelling circus - to perform at the mercy of hungry lions, sabotaged high wires and a demonic ringmaster. The ruling class visit the circus as an escape from their structured, high-achieving lives - pure entertainment with a bloodthirsty edge. Ben, the teenage son of a draconian government minister, visits the circus for the first time and falls instantly in love with Hoshiko, a young performer. They come from harshly different worlds - but must join together to escape the circus and put an end to its brutal sport.

Show Stopper by Hayley Baker is a unique circus tale, introducing readers to the Cirque, a place of death defying stunts, treachery and untold danger.

In futuristic England, society is separated into two very distinct divisions, the Pure and the Dregs. The Pure are those of English heritage and live comfortable, structured lives while those of mixed, foreign or poor decent are known as Dregs and find themselves struggling to survive; treated less then human. Ben Barnes is a Pure whose mother holds an esteemed job in the Pure government administration. When she’s invited to the opening night of the Cirque, a circus featuring Dregs, Ben and the rest of the family attend alongside her. Hoshiko is a trapeze artist and a member of the Cirque, forced to perform for demanding Pures, wanting an escape from their lives in the form of the circus's deadly show. Ben and Hoshiko couldn’t be more different, but when they meet and instantly fall in love, the two teens must find a way to get Hoshiko free of the traveling circus and it’s demonic ringmaster.

Introducing readers to a circus world full of violence and death, I found Show Shopper to be an interesting and unique novel. It wasn’t until I began reading it that I realised it was on the receiving end of very mixed reviews, but I found it somewhat entrancing myself. Author Hayley Baker has created a world of division, oppression and violence in this novel where those of lesser classes are forced to participate in demeaning shows where the audience want the performer to meet a violent end.

Show Stopper really made me think as I read the story. The division between the two levels of society was huge. Dregs were considered less than human, incapable of intellectual thoughts or feelings. The Pures saw them as a race to be exterminated and the lack of respect they had for them was mind boggling. I mean to take pleasure from someone else’s pain, to see their deaths as sport and entertainment---it was brutal. And the Dregs really were just normal people….I personally liked what author Hayley Baker did with the novel here—it made for some intriguing reading.

Show Stopper unfolds through both Ben and Hoshiko’s POV’s and features quick, short and effective chapters. Baker allows readers to witness things from both sides, which is very effective in setting the scene especially as you witness the horrors Hoshiko and the other performers are subjected too. It’s heart breaking, but makes you appreciate the closeness of their group even as pain continues to play a large part in their lives.

The brutality and harshness of this story is what sets it apart. Ben and Hoshiko were both likable enough and were sweet in an endearing and hopeful way as a couple, but it wasn’t their romance that made Show Stopper enjoyable for me. There was something beguiling about the cruelty of this novel and the possibility that any race could be treated as the Dregs were. As a reader you were waiting for the moment something goes right for them and I think Barker did a good job setting the stage.

Dark but thrilling, Show Stopper was a story unlike anything I’ve read lately and I do believe it’s actually worth a read