Welcome to the Blog Tour for Over Raging Tides by Jennifer Ellision presented by Xpresso Book Tours! I've really enjoyed Jennifer Ellision's novels in the past so I'm happy to be helping her celebrate the release of her latest novel.

The pirate crew of the Lady Luck lives by many rules, but chief among them is this: they do not allow men on board.

That’s a rule that quartermaster Grace Porter is willing to break when a shipwrecked young nobleman offers her information of an omniscient map, stolen from his warship by an enemy vessel. Until now, the map was only the stuff of legend… but with its help, Grace may finally be able to hunt down the Mordgris, the sea monsters who stole her mother away from her.

Unfortunately, some members of her crew have other plans...

To find the map and face the Mordgris, Grace will have to confront her past, put the Luck between warring nations, and uncover treachery aboard the ship. And ultimately, her revenge and the destruction of the Mordgris will come at a hefty price: the betrayal of her crew.

Grace promised them they wouldn’t regret this.

She just isn’t sure that she won’t.

From Over Raging Tides.....

I follow the call, finding my way up to the forecastle. Before looking overboard, I brace myself, knowing what I’ll see. This isn’t the first time they’ve summoned me like this.

My mother’s face bobs in the water.

Despite expecting it, seeing her knocks the breath from me. Her eyes are exactly the same: that unearthly teal, spotted with dark flecks. Her hair is sodden, slicked back and billowing about her shoulders on the tide. It’s cruel, how healthy she looks. She’s just as I remember her, down to the small beauty mark above her lip.

She tilts her head to the side. “Oh,” she sighs in that musical way she always had. “Gracie.”

My hands knot themselves around the railing, drinking in the sight of her.

A second form breaks the surface, and a strangled sound leaves my throat. My mother’s twin.

“Grace.” When she smiles at me, it’s needle-sharp.

Another face rises above the water. “Gracie.”

This is one of the Mordgris’ cruelest tricks. They wear the form of someone you love, and they torture you with it.

It’s too much. This isn’t the first time, but it’s worse every time. There are more of them every time. And with each appearance, they grow bolder and bolder, getting increasingly close to the ship.

I swallow a hysterical lump in my throat and yank my pistol from my belt with shaking hands, firing haphazardly into the water. I’m usually a good shot, but can’t bring myself to aim at my mother’s face. I miss by a wide margin, the shot plinking harmlessly into the waves.

They finally abandon the illusion, my mother’s face vanishing into the all-too-familiar visage of the Mordgris. Gray skin stretched tight over a noseless skull, pointed teeth stretched wide in seven grins below inky eyes. 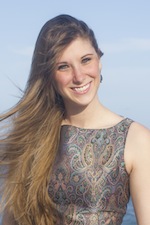 Jennifer Ellision spent a great deal of her childhood staying up past her bedtime with a book and a flashlight. When she couldn’t find the stories she wanted to read, she started writing them. She loves words, has a soft spot for fanfiction, and is a master of the fangirl flail. She resides in South Florida with her family, where she lives in fear of temperatures below 60 Fahrenheit.