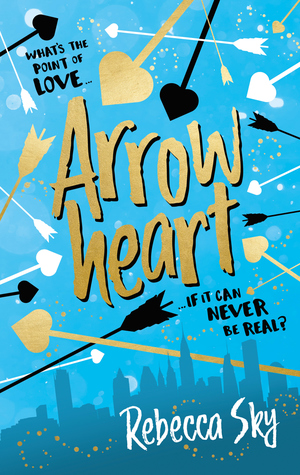 Arrowheart by Rebecca Sky
Releases on: June 14th 2018
Add on Goodreads!
The gods are gone.
The people have forgotten them.
But sixteen-year-old Rachel Patel can't forget - the gods control her life, or more specifically, her love life.

Being a Hedoness, one of a strong group of women descended from Greek God Eros, makes true love impossible for Rachel. She wields the power of that magical golden arrow, and with it, the promise to take the will of any boy she kisses. But the last thing Rachel wants is to force someone to love her . . .

When seventeen-year-old Benjamin Blake's disappearance links back to the Hedonesses, Rachel's world collides with his, and her biggest fear becomes a terrifying reality. She's falling for him - a messy, magnetic, arrow-over-feet type of fall.

Rachel distances herself, struggling to resist the growing attraction, but when he gives up his dream to help her evade arrest, distance becomes an insurmountable task. With the police hot on their trail, Rachel soon realizes there are darker forces hunting them - a group of mortals recruited by the gods who will stop at nothing to preserve the power of the Hedonesses - not to mention Eros himself, who is desperate to reverse the curse . . .

Rachel must learn to do what no Hedoness has done before - to resist her gift - or she'll turn the Ben she's grown to love into a shadow of himself ... for ever.

Thoughts:
Taking out of the equation the fact that the heroine has the best name ever *hehe* Arrowheart sounds soooooo fun. I love Greek Mythology and romance so put them together and I'm in heaven. Bring this one on!

What do you think of Arrowheart?
And what are YOU waiting on this week?