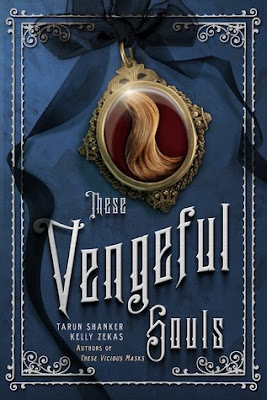 England, 1883. On the run with the grieving Sebastian Braddock, Evelyn wants two things: to be reunited with her friends, and to get revenge on the evil Captain Goode. Not only has he misused his and Sebastian's powers to rack up a terrible death toll, but he's also completely destroyed any hope of Evelyn or her friends regaining the life they once knew.

Evelyn is determined to make Captain Goode pay for what he's done, but is her revenge worth risking the lives of Sebastian and her friends? Or is it better to flee the city and focus on staying alive? And with the Captain spreading lies about Sebastian in an attempt to flush them out of hiding and turn the populace against them, does she even have a choice at all?

These Vengeful Souls is the stunning finale to Kelly Zekas and Tarun Shanker’s These Vicious Masks series and is an edge of your seat conclusion to what has been a simply brilliant historical fantasy!

Evelyn Wyndham and Sebastian Braddock are on the run after the harrowing events of the Ball that saw the evil Captain Goode misuse his and Sebastian’s powers to kill dozens of people and blame Sebastian in the process. Setting Sebastian up as the villain of the story, Captain Goode quickly does public with the Society of Aberrations, winning over the English people and cementing himself a role of hero to the nation. Only Evelyn and her friends know the truth and once reunited they must find a way to stop Captain Goode before his plans come to fruition. Yet with Captain Goode forcing many Society members to help him, stopping him is going to be the biggest task Evelyn has ever faced and beating him may come with a price she’s not prepared to pay…..

Having immensely enjoyed the two previous novels in this series, I was both excited and saddened to read this final instalment—excited to be with the characters I have come to love once again and saddened as These Vengeful Souls would be the last chance I would get to do so. These Vicious Masks have honestly been a pleasure to read and I can’t recommend this exciting and dashing world Kelly Zakas and Tarun Shanker have created enough.

Perfectly written and featuring a world that is League of Extraordinary Gentlemen meets Jane Austin, These Vengeful Souls once again follows healer Evelyn and her close friends as they continue their fight against those who would persecute them for their extraordinary abilities. After being betrayed by Captain Goode, Evelyn, Sebastian, Mr Kent and the others find themselves up against a foe who was formally an alley and someone who does not hesitate to manipulate individuals and events for their own gain. Someone who also manages to be one step ahead of our heroes even as they fight so hard to gain the upper hand.

These Vengeful Souls was a really eventful and satisfying read. The world within this series has been so enjoyable to explore. With the series set in luscious 19th century England, Zekas and Tarun work wonderfully together to create a vivid, adventurous and compelling world that follows a strong willed, determined main character in the form of Evelyn who is vastly enjoyable to follow. Stubborn, biting and sometimes reckless to a fault, Eve was someone I adored very much and is exactly the kind of person I hope for in historical novels of this nature.

Bringing to an end a spectacular series, These Vengeful Souls was fast paced and eventful. All the minor characters I’ve come to love were back again—including Sebastian and Mr. Kent—and Kelly Zakas and Tarun Shanker conclude the novel in a manner befitting this fabulous series. I’ll definitely ready whatever they release next and can’t recommend These Vicious Masks enough!