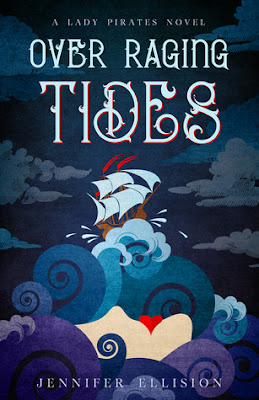 The pirate crew of the Lady Luck lives by many rules, but chief among them is this: they do not allow men on board.

That’s a rule that quartermaster Grace Porter is willing to break when a shipwrecked young nobleman offers her information of an omniscient map, stolen from his warship by an enemy vessel. Until now, the map was only the stuff of legend… but with its help, Grace may finally be able to hunt down the Mordgris, the sea monsters who stole her mother away from her.

Unfortunately, some members of her crew have other plans...

To find the map and face the Mordgris, Grace will have to confront her past, put the Luck between warring nations, and uncover treachery aboard the ship. And ultimately, her revenge and the destruction of the Mordgris will come at a hefty price: the betrayal of her crew.

Grace promised them they wouldn’t regret this.

She just isn’t sure that she won’t.

Over Raging Tides by Jennifer Ellison is a dashing pirate adventure on the high seas full of action, danger and just the inkling of possible romance.

The pirate crew of the Lady Luck live by a commandment of rules, the most important one being no men allowed on the ship at any time. This is a rule that quartermaster Grace Porter breaks when the Luck stumbles upon the wreckage of a downed ship and Grace rescues two survivors from the water. Dealing with the fallout isn’t easy, but when one of the young noblemen tells Grace and her Captain of a powerful map said to be able to display the location of whatever its barer desires that was stolen from the sunken ship by an enemy vessel, Grace and the crew of the Luck set out to steal the map back. For Grace, the map might be exactly what she needs to hunt down the vicious Mordgris, sea creatures who stole her mother away from her. Revenge is in the first and foremost on her mind, but with Grace beginning to suspect all is not right aboard the Luck, treachery will come in many forms and Grace may just wind up regretting some of the choices she makes…..

Having previously enjoyed Jennifer Ellison’s Threats of Sky and Sea series, I was excited to delve into her most recent release Over Raging Tides. I haven’t read many pirate tales myself, but it is a sub-genre I am intrigued by and I think shows a lot of potential. In saying that, Over Raging Tides was well written and offers a promising start to what I’m hoping will be a thrilling series.

This first instalment introduces readers to main character Grace who lives a life of piracy aboard the Lady Luck, a vessel with an all-female crew of pirates. For the most part I really liked Grace. She was intelligent and quick thinking, able to handle her own against any man and someone who was easy to follow. The only time I struggled with Grace was when her lack of morality kicked in. Over Raging Tides is full of action, battle scenes and includes some violence, so Grace’s ability to kill without too many qualms didn’t sit well with me at times. And yet, I could see her growing a conscience too as the novel progressed and am looking forward to seeing a lot of character growth in Grace with the rest of the series.

The Lady Luck features some interesting characters including Captian Ilene and crew member Sam who seems to be a very true friend to Grace. Grace’s past including what happened to her mother is something I’m looking forward to exploring especially considering some of the things that happened to Grace during Over Raging Tides. Leo and John were good additions to the novel and of course rock the ship with their male status. I’m a romantic at heart so of course I’ll be following Grace’s relationship with her love interest with great enthusiasm.

Ending with unexpected developments and surprises, Over Raging Tides leaves me wondering what will happen to Grace, Leo and the rest of the crew now. I’ll be interested to see what Jennifer Ellison does next and how she develops this series!

Source: Sent for review by Xpresso Book Tours and the author (Thank you ladies!)
Publisher: Published by author
Format: Kindle ebook
Release Date: March 20th 2018
Purchase: Amazon
Final Thoughts: I enjoyed this novel and am looking forward to the next one.