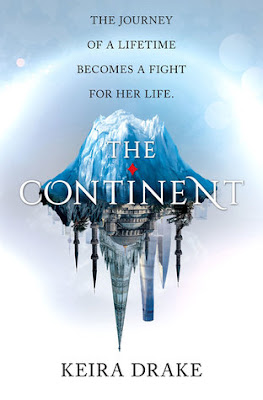 For her sixteenth birthday, Vaela Sun receives the most coveted gift in all the Spire—a trip to the Continent. It seems an unlikely destination for a holiday: a cold, desolate land where two nations remain perpetually locked in combat. Most citizens lucky enough to tour the Continent do so to observe the spectacle and violence of battle, a thing long vanished in the peaceful realm of the Spire. For Vaela, the war holds little interest. As a smart and talented apprentice cartographer and a descendent of the Continent herself, she sees the journey as a dream come true: a once-in-a-lifetime opportunity to improve upon the maps she’s drawn of this vast, frozen land.

But Vaela’s dream all too quickly turns to nightmare as the journey brings her face-to-face with the brutal reality of a war she’s only read about. Observing from the safety of a heli-plane, Vaela is forever changed by the sight of the bloody battle being waged far beneath her. And when a tragic accident leaves her stranded on the Continent, Vaela finds herself much closer to danger than she’d ever imagined—and with an entirely new perspective as to what war truly means. Starving, alone, and lost in the middle of a war zone, Vaela must try to find a way home—but first, she must survive

The Continent is Keira Drake’s debut novel and is an enjoyable fantasy YA that features a unique concept and is full of danger, action and romance.

Sixteen year old Vaela Sun is a member of the Spire, a refined and perfectly composed society of people whose morals and ideals embrace the concept of peace. For her birthday, Vaela receives the most coveted gift a person can be given—tickets to The Continent. Though it seems like a strange place for a holiday, the icy and desolate land is home to two waring races and is somewhat of a spectacle to the Spirian people. When the trip of a lifetime turns tragic, Vaela finds herself alone in the harsh Continent wilderness. Vaela is determined to find a way home, but first she must survive in a land so different than everything she’s ever known…...

After a turbulent first couple of chapters, The Continent was a novel I found I very much enjoyed—more so than I anticipated I would. Keira Drake has beautiful lyrical writing that flows wonderfully and I felt that she has created a story that is very intriguing. The Continent introduces readers to a beautiful but dangerous land of ice and snow that is home to two warring races of people.

I was entranced by the concept within The Continent of the Xoe and the Aven’ei. The people of the Spire effectively viewed the Xoe and Aven’ei with a morbid curiosity, observing them the way one would an ancient civilisation or primitive culture without physically interacting with them. It was thought provoking—the idea that these two races were allowed to interact and war with each other while a third watched them from afar. The Spire literally allowed two races to engage in brutal and violent battles while they watched above from planes in comfort.

The protagonist of The Continent is Vaela, a young woman who has known nothing but opulence and has never experienced hardship or violence a day in her life. At the beginning of the novel Vaela comes across as naïve; very much a product of her society but as the novel progresses Vaela’s natural kindness and innocence grow into a powerful strength to survive and an appreciation of the Aven’ei way of life. Through her grief and pain, Vaela finds true happiness thanks to those who welcome her to their lives including Kiri, Raia and Noro who is her love interest throughout the story.

Vaela and Noro have a really sweet, endearing relationship. Noro’s introduction to the story comes as Vaela’s saviour and he quickly becomes a friend to her, helping in his own quiet, thoughtful way to help her assimilate into life amongst the Aven’ei. I think it’s very obvious from the beginning of The Continent where Vaela and Noro are heading romantically, but that doesn’t make the sweetness of their budding romance any less satisfying as they slowly fall in love.

The Continent comes to a brutal and harrowing close. Keira Drake writes some beautiful dialogue and sentiments throughout the story, but ultimately brings the novel to a fitting, albeit brutal ending where not everyone will survive and emotions run high. I definitely recommend this one!

Source: Sent for review by publisher (Thank you guys!)
Publisher: HarlenquinTEEN
Format: Paperback ARC
Australian RRP: $19.99
Release Date: 27th March 2018
Purchase: Bookworld | Booktopia | The Book Depository | Amazon
Final Thoughts: I very much enjoyed The Continent and will be keeping an eye out to see if there is a sequel in the future.