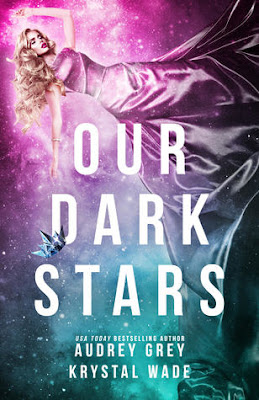 While she sleeps, the whole universe changes.

Princess Talia Starchaser has it all. Wealth. Status. Adoring citizens. But on the eve of her eighteenth birthday, she’s forced to publicly betray her best friend, a companion mock she’s had since birth, setting events into motion that lead to the destruction of the humans, and the princess floating through space, a remnant of a time when humans ruled over droids.

One hundred years later, half-mock captain Will Perrault and his ragtag crew discover a device floating in space. When a very human Talia emerges from its depths, Will suspects she’s the key to buying his way back into the regiment he once commanded against the last remaining rebel humans—and the ruling mock queen’s good graces.

Both Talia and Will would rather get space-tossed than trust one another, but with the queen’s forces chasing them across the galaxy and the fate of both worlds hanging in the balance, they’ll forge the unlikeliest of alliances to survive.

Our Dark Stars by authors Audrey Grey and Krystal Wade is a thrilling and explosive sci-fi tale in the vein of novels such as the Lunar Chronicles by Marissa Meyer and the Starbound Trilogy by Amie Kaufman and Meagan Spooner and is perfect for readers who love their novels exhilarating and adventurous with just the perfect sprinkling of romance.

In a world where humans own and employ droids built with artificial intelligence known as mocks, on the outside eighteen year old Princess Talia Starchaser seems to have it all. Wealth, status, beauty, but as a member of the infamous Starchaser Dynasty there are difficulties that come with it, including being betrothed to a man she doesn’t know and being forced to publicly humiliate her best friend, a companion mock who has been by her side since she was born. Trying to save someone she loves sees Talia set into motion events that will see the enslavement of the human race and Talia floating through space cryogenically frozen.

One hundred years later, half human, half mock captain Will Perrault is leading a group of ragtag scavengers when they stumble across Talia’s floating device, unaware it contains the very future of the human Alliance. When Talia emerges from the device to a world controlled by mocks, Will is sure this stubborn and infuriating human is the key to regaining control of his old military regiment. Determined to present her to the mock Queen and hoping to be reinstated to his former glory, Will’s plans for recognition quickly derail and when it becomes clear he and Talia are going to have to work together to ensure the crew make it out alive, will these two enemies find common ground? Or will their prides see them bring destruction to more than just themselves?

Having read and loved Audrey Grey’s other books in the past, I was beyond stoked to discover she had a new novel coming out and was completely smitten with the beautiful cover as soon as I saw it. I knew I had to read this and it was suffice to say I had big expectations for Our Dark Stars. So in saying that, I’m thrilled that Audrey Grey and Krystal Wade not only delivered but then some! I honestly adored this novel and am still thinking about this exhilarating story even after I have finished it.

Our Dark Stars introduces readers to a very well-constructed and realised sci-fi world. Gritty but fascinating, I admit the storyline was somewhat predictable for me, but I still enjoyed seeing everything unfold as authors Audrey Grey and Krystal Wade wove together different elements to bring the story together beautifully. The action, humour, danger, chemistry and perfect amount of a developing connection and potential romance between the main characters helped me to perfectly envision this futuristic world.

I appreciated seeing Our Dark Stars through both Talia and Will’s eyes. Not only did this assist with the back and forth chapters through time, but made me really care for both of the main characters and see where they were coming from. Talia was a strong female lead who was kind but fiery while Will was truly complex, born human but altered as a child to become part mock. I think they were great to follow, had real personality and shared a very promising chemistry together. Their dynamic was addicting and even though the romance was really kept to a minimal, I loved seeing them interact.

I also very much enjoyed seeing the juxtaposition between the world our heroine Talia once inhabited and the one hero Will calls home one hundred years later. It’s basically a role reversal between the humans and the mocks, something that makes you think about the possibilities in our own futures and how something such as this could happen. Personally I would have loved to see more about how the mocks came to be in control and how the humans adjusted to their revered positions, but at this point in time the novel doesn’t allow for this.

Our Dark Stars will take you on an intergalactic journey you won’t want to end. I’m very hopeful there will be a sequel even though I can see the novel being a standalone story. There is still so much that Grey and Wade could explore further, including the romance between Talia and Will. I’m hopeful we will see a sequel in the future and will be keeping my eyes peeled for the possibility of more from this very thrilling world!