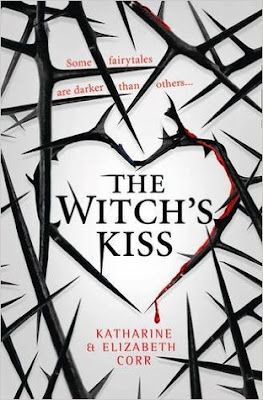 Sixteeen-year-old Meredith is fed-up with her feuding family and feeling invisible at school – not to mention the witch magic that shoots out of her fingernails when she’s stressed. Then sweet, sensitive Jack comes into her life and she falls for him hard. The only problem is that he is periodically possessed by a destructive centuries-old curse.

Meredith has lost her heart, but will she also lose her life? Or in true fairytale tradition, can true love’s kiss save the day?

The Witch’s Kiss is the debut novel for sisters Katharine and Elizabeth Corr and is an intriguing twist on a classic fairy-tale.

Sixteen year old Meredith "Merry" Cooper is a witch…..technically. After a series of bad decisions, Merry has sworn off using her magic, but that doesn’t mean she can control the magic that shoots out of her fingers when she’s stressed or upset. When Merry begins having a series of dreams about a handsome young man named Jack, she soon learns that her family is connected to a centuries old curse placed upon Jack by a wizard out for revenge; a wizard that Merry is expected to defeat by using the very magic she’s sworn off using. But with lives on the line and the wizard growing more powerful every day, will Merry be able to save Jack and stop the wizard? Or is Jack fated to be doomed forever?

The Witch’s Kiss is one of those books that leaves me really conflicted. The concept is brilliant—loosely based around Sleeping Beauty, but where Sleeping Beauty is actually a prince not a princess who has been cursed by a wizard, not a witch that was wronged by the prince’s parents. Yet everything else about this novel seemed to fall flat….

I was hoping for a really fast paced story, but The Witch’s Kiss seemed to drag on for me. There was, what seemed to me, like a lot of unnecessary build up to a battle that is short lived and anticlimactic. Unfortunately, I found our main character Merry to be a little lacklustre. She got the job done as the heroine, but I failed to connect with her, as I did the rest of the characters.

Considering the curse put on Jack and the connection to the Sleeping Beauty fairy-tale that The Witch’s Kiss featured, I was anticipating this really heartfelt romance during this story, surely if some kind of true love is supposed to break the spell? Yet no. There is little to no romance between Merry and Jack that impacts on the story and the romance and connection between them seemed forced on the author’s part. I feel like Katharine and Elizabeth Corr had a brilliant idea, but the execution just isn’t there.

The back story surrounding The Witch’s Kiss was really interesting; lending a new twist on Sleeping Beauty. I personally would have loved to see more of Jack and his time—I actually quite liked this part of the book and thought his sweet character had potential.

Though it was a slow read that could have soared, but ultimately didn’t, The Witch’s Kiss wasn’t necessarily a bad book. It just didn’t do enough for me. Overall a good attempt—jury’s out on whether I’ll read the sequel. I may simply because the curiosity in me can’t be satisfied with anything but a true happily ever after…..