Book Shelf: Fall of Thrones and Thorns (Threats of Sky and Sea #3) by Jennifer Ellision 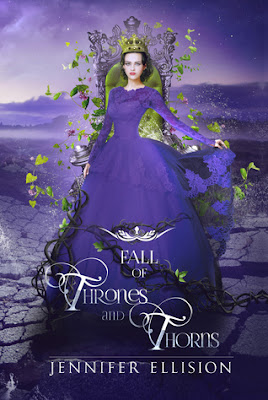 War hurtles in, a typhoon over the sea.

After Bree’s life was torn apart, Nereidium had represented a haven to her. A place that—if she could save it—was beyond the King’s reach.

And, at last, she’s arrived upon its shores. But things in Nereidium are not what they should be.

The land is plagued by a rash of mysterious earthquakes, the likes of which it’s never known. The governors are distracted by old traditions, while Bree and her friends grapple with changing identities and the sense that the longer they wait to take action… the greater the danger from Egria grows.

Bree is tired of living under the shadow of King Langdon’s power. And she’s tired of waiting for him to be the first to act.

In this final chapter of the Threats of Sky and Sea series, it all comes down to Nereidium or Egria. To Bree or the King. It’s kill… or be killed.

And not everyone will escape the battle unscathed.

Fall of Thrones and Thorns is the third and final novel in Jennifer Ellision’s Threats of Sky and Sea series and marks the end of the trilogy in sensational fashion with a fast paced, exciting and stellar romantic conclusion that will hold your attention until the very final page!

Picking up almost exactly where the previous book left off, Fall of Thrones and Thorns sees Bree’s true identity finally made known to those in her life as she accepts her rightful position as Nereidium’s Queen. As war looms closer than ever before, Bree, Caden, Aleta and those closest to them struggle with their new positions as they must decide whether to stand back and wait for King Langdon’s forces to find them or take the fight to him. But with unexpected problems arising, the choice may no longer in their hands and Bree must rally as many allies as possible before King Langdon destroys everything she holds dear.

Wow--what an exhilarating ending to a highly enjoyable fantasy series! Kicking off the last book, Fall of Thrones and Thorns manages to utterly ensnare from beginning to end and continue to maintain a fast paced and exciting plotline. There is once again a lot of action and magic to be found in this instalment as well as friendship, humor and romance.

All the characters have come such a long way in the lead up to the final confrontation between Bree and the King of Egrian. I’ve loved following Bree and Caden, and very much enjoyed seeing this novel unfold through Aleta’s eyes at times too. They've both been strong main characters to follow and I’ve enjoyed seeing them grow and develop very much.

Bree and Caden have been joined throughout the series by a great cast of characters who Jennifer Ellison seemed to have slowly paired up over the series; Aleta, Tregle, Liam, Meddie, Lalia, Elena…I’ll be sad to say goodbye to them, but I’ve enjoyed all the fun and substance they’ve brought to the series.

My only fault with this book was actually the final chapter. Jennifer Ellison concludes the series by tying up most loose ends and leaving the reader hopeful for her characters futures, but I really wanted a little bit more. After everything Bree and Caden have been through, I wanted to know that they had gotten their happily ever after; that they managed to overcome the fact that they are now the leaders of two different people and actually be together. I also wanted to see what happened to Liam and Meddie, Lalia and Elena, and even Clift. Maybe Ellison will indulge us one day and write a spin-off series or a novella that allows us to see how the characters have fared further down the line…..

Still, as far as the final book in a series, Fall of Thrones and Thorns doesn’t really disappoint. Jennifer Ellison keeps her readers on their toes and eagerly following her characters as they gear up for their final showdown against the King that eventually takes place in spectacular fashion. A great fantasy series that I definitely recommend.