Book Shelf: Blood of the Prophet (The Fourth Element #2) by Kat Ross 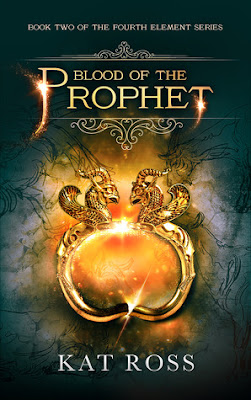 The Prophet Zarathustra has been called many things. Now he spends his time drawing pictures of weird-looking goats. That's what happens when you've been stuck in a prison cell for two hundred years. But the man who might be mad, and is definitely supposed to be dead, has suddenly become very valuable again…

It's only been a few weeks since Nazafareen escaped the King's dungeons with her daēva, Darius. She hoped never to set foot in the empire again, but the search for the Prophet has led them to the ancient city of Karnopolis. They have to find him before Alexander of Macydon burns Persepolae, and Darius's mother with it. But they're not the only ones looking.

The necromancer Balthazar has his own plans for the Prophet, and so does the sinister spymaster of the Numerators. As Nazafareen is drawn in to a dangerous game of cat and mouse, her newfound powers take a decidedly dark turn. Only the Prophet understands the secret of her gift, but the price of that knowledge may turn out to be more than Nazafareen is willing to pay…

Blood of the Prophet is the second novel in The Fourth Element series by Kat Ross and follows on where its predecessor left off; drawing readers into another wonderfully depicted tale of danger, magic and exhilarating romance!

Having escaped the King’s clutches, former Water Dog Nazafareen and her daeva Darius set out in search of the Prophet Zarathustra before Alexander of Macydon invades their land and burns the city of Persepolae to the ground. Joined by their friends Tijah and Myrri, Nazafareen and Darius journey across sea and desert to a small city believed to house the Prophets prison, hoping to discover his whereabouts. Hiding in plain sight, Nazarfareen and Darius bide their time before they can act, even as a dangerous enemy also seeks the prophet and Nazafareen battles the unexpected powers that seem to surface within her. With lives on the line and danger looming, will Nazafareen be able to protect those she loves or are she and Darius doomed to be torn apart forever?

Kat Ross is back with a very addictive sequel in the form of Blood of the Prophet! Blood of the Prophet sees readers join Nazafareen once again after the events of the first book, The Midnight Sea saw Nazafareen reassess her loyalties and decide upon following her instincts and her heart rather than her Kings instructions.

As she did with the first novel, Ross continues to depict an alluring desert world within this story. Religious sects, powerful individuals and demonic creatures abound in this instalment and I continue to love the overall feel of the series. Ross keeps the stakes high and the plot forward moving, weaving romance, danger and unexpected loss into the story with our heroes doing everything in their power to locate the Prophet before Alexanda invades Persepolae.

Nazafareen continues to be a strong lead to follow. She’s deeply in love with her daeva-- even though the two of them are still navigating their recently acknowledged feelings, trying to protect innocent people who will die if Alexandra invades, even if it’s the only way to stop their brutal king and also beginning to notice changes within herself as a result of the bond. In Blood of the Prophet Nazafareen begins to display abilities she never has before and Ross indicates big things in store for Nazafareen with the next book.

I continue to adore Nazafareen’s friends and the supporting cast in their series. Darius and Nazafareen have such a sweet and strong relationship and I love seeing them in all their glory together. A loss of someone close throws the characters, but I’m intrigued to see more of Tijah who I believe has a larger role in the third and final book.

Fast paced, exciting and endlessly well written, Blood of the Prophet ends a little too abruptly for my taste, but leaves me none-the-less dying to get my hands on the final novel Queen of Chaos as soon as it releases to see how Kat Ross concludes Nazafareen and Darius’s story!