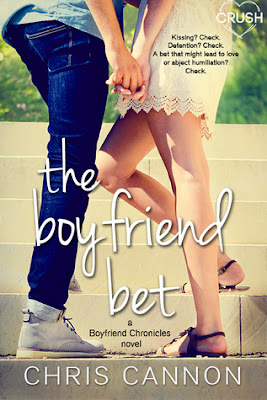 Disclaimer: This Entangled Teen Crush book contains multiple PDAs, after-school detentions, and gambling on the side. Warning: betting on a boyfriend is bad for your health.

Zoe Cain knows that Grant Evertide is way out of her league. So naturally, she kisses him. Out of spite. Not only is Grant her brother’s number-one nemesis, but he has zero interest in being tied down to one girl. She’s shocked—and secretly thrilled—when they start spending more time together.

Zoe’s brother claims Grant is trying to make her his “Ringer,” an oh-so-charming tradition where a popular guy dates a non-popular girl until he hooks up with her, then dumps her. Zoe threatens to neuter Grant with hedge clippers if he's lying but Grant swears he isn’t trying to trick her. Still, that doesn’t mean Grant is the commitment type—even if winning a bet is on the line.

The Boyfriend Bet by Chris Cannon is a sharp and fun summer romance and a nice addition to the Boyfriend Chronicles that will appeal to those who love their contemporary YA romance.

There’s nothing drama loving Zoe Cain enjoys more in life than annoying her brother. Which is why she takes it upon herself on the first day of school to kiss his nemesis Grant Evertide. Zoe knows Grant is out of her league, but after that one kiss, Zoe can’t help wanting to do it again. Having just gotten out of a relationship with a crazy ex, the last thing Grant wants is a new girlfriend, even if Zoe is all kinds of fun. Grant is determined for he and Zoe to be strictly non-exclusive, but Zoe has other ideas….will Zoe be able to convince Grant to take a chance on her? Or will the two of them only end up hurting each other?

Unfolding through the back and forth POV’s of Zoe and Grant, The Boyfriend Bet was a strange book for me to read, mostly because I thought the characters were hopeless at times, yet the story was so entertaining and fun that I thoroughly enjoyed the reading experience. I think the best way to read this book is to take it for what it is and not take it too seriously. So in saying that, Chris Cannon wrote a fun romance that explored all aspects of teenage drama; romance, rebellion, angst, anger…..all kinds of emotions were explored in this story and the main characters certainly took you on a journey.

Overall I easily followed the main characters, although at times I was a little over their antics. Perhaps that’s due to age. Zoe was a dramatic kind of person who enjoyed annoying her brother and keeping people on their toes. She was easy to follow and I enjoyed her vulnerability. Really she was just a normal teenager. Grant was one of those characters where I wondered at times if I actually liked him. Don’t get me wrong, he was entertaining and he made me smile, but he wasn’t always the nicest or most considerate of person. Or maybe that’s because he was such a spoilt, well off individual who was used to getting what he wanted, when he wanted.

I enjoyed Zoe and Grant a lot better when they were together. While I didn’t always appreciate Grant’s attitude towards Zoe, I do admit he’s a typical guy and I think Chris Cannon wrote him pretty well in this department. Grant has to decide if he truly wants Zoe enough to stop his flirty ways and I enjoyed seeing him work up to that decision. Grant and Zoe were cheeky together and I liked the banter exchanged between them.

The Boyfriend Bet was a pretty quick and easy summer read. I’m super in love with Zoe’s best friend Delia and Grant’s best friend Aiden and their little romance that was woven into The Boyfriend Bet. I’m keeping my fingers crossed that Chris Cannon decides to give them a story in this series too!