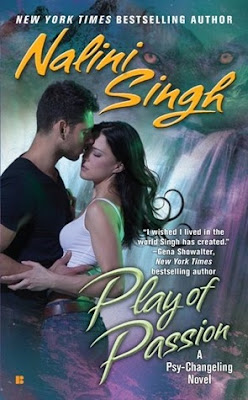 In his position as tracker for the SnowDancer pack, it's up to Drew Kincaid to rein in rogue changelings who have lost control of their animal halves- even if it means killing those who have gone too far. But nothing in his life has prepared him for the battle he must now wage to win the heart of a woman who makes his body ignite... and who threatens to enslave his wolf.

Lieutenant Indigo Riviere doesn't easily allow skin privileges, especially of the sensual kind- and the last person she expects to find herself craving is the most wickedly playful male in the den. Everything she knows tells her to pull back before the flames burn them both to ash... but she hasn't counted on Drew's will.

Now, two of SnowDancer's most stubborn wolves find themselves playing a hot, sexy game even as lethal danger stalks the very place they call home.

Play of Passion marks the ninth book in the Psy-Changeling series so spectacularly told by Nalini Singh and is yet another deeply enjoyable, sensual and charismatic tale.

Andrew “Drew” Kincaid is known in his SnowDancer pack for his charming, easy-going, often silly nature, with few knowing he’s a talented tracker whose abilities are utilized by his alpha with sometimes deadly results. Drew is used to people underestimating him, but never has he felt the need to prove himself like he does as he prepares to convince the woman he adores to give him a go. Lieutenant Indigo Riviere is SnowDancer’s most dominate female solider. Holding a high position in the pack hierarchy, Indigo is thrown through a loop when the younger, and slightly less dominate Drew makes it clear what he wants something she never expected; her.

Play of Passion is yet another great novel by Nalini Singh. This series is so sensational to read and highly addictive. Honestly, I’ve been racing through this series, completely lost in Singh’s tactile world and luscious romances. Every development within this series seems to be so perfectly planned and explored that the result is a series of forward moving storylines set across a number of books. I love the way past characters and past developments keep coming up and are woven into each new story.

Front and centre this time around are Drew and Indigo, two strong SnowDancer members. Drew and Indigo were another pair I enjoyed reading about. Singh explores a very interesting dynamic between these two with the minor differences in their dominance levels impacting on their relationship. Indigo is four years older than Drew and holds a higher position in the pack; making their pairing one that holds difficulties where their wolves are concerned. I liked the way Singh reasoned their responses and reactions and had them resolve their issues.

I really enjoyed Drew in this novel and thought he was a real sweetie, with a charming, charismatic nature. I have to give Drew props too—even though he was younger than Indigo and less mature in many aspects, he really did know what he wanted. And it wasn’t a meaningless fling either; he was head over heels for Indigo and determined to prove to her he could be a worthy mate, something I found really sweet.

Play of Passion was another enjoyable instalment in this series and with the novel ending in a fast and edge of your seat manner, words cannot even begin to describe how excited I am to read Hawke and Sienna’s novel next! Theirs is the one I’ve been waiting for since I first began to fall in love with the series……..