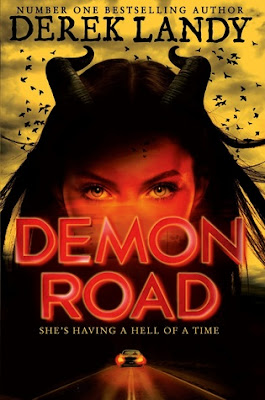 Full of Landy’s trademark wit, action and razor sharp dialogue, DEMON ROAD kicks off with a shocking opener and never lets up the pace in an epic road-trip across the supernatural landscape of America. Killer cars, vampires, undead serial killers: they’re all here. And the demons? Well, that’s where Amber comes in...Sixteen years old, smart and spirited, she’s just a normal American teenager until the lies are torn away and the demons reveal themselves.

Forced to go on the run, she hurtles from one threat to another, revealing a tapestry of terror woven into the very fabric of her life. Her only chance rests with her fellow travellers, who are not at all what they appear to be…

Demon Road is the first novel in acclaimed author Derek Landy’s new series and is an action packed thrill ride that explores all your favourite elements of the paranormal.

Sixteen year old Amber has always thought she was a normal teenager, but all that changed when her parents tried to kill her. Revealing their true demon forms, Amber’s parents have big plans for their child, and it’s only by fleeing town with a stranger named Milo that Amber has any hope of surviving. Facing threat after threat Amber and Milo are on a race against time if they hope to find a way of protecting Amber against her parents, who will stop at nothing to find her.

As my first Derek Landy novel, Demon Road was a really interesting book to read, although in all honesty it didn’t blow me away. The story was well written and incredibly fast paced, but I felt a little disconnected from the characters. I couldn’t connect with the main character Amber as much as I’d have liked. However, Derek Landy included so much action and so many exciting moments that it was really hard not to enjoy the novel. If only for the entertainment factor.

Demon Road was choc-a-block full of the supernatural and if there’s anything I love it’s the supernatural. Demons, vampires, undead murders, curses, cars that are literally alive and even psychotic children….Demon Road had it all and then some. I wonder what more Landy has up his sleeves with the rest of the series.

Though I failed to connect with her as much as I would have liked, Amber was easy to follow and her voice sure. The relationship between Amber and Milo has me intrigued with the father/daughter friendship that is developing. I liked Glen and I liked Imelda, but boy Landy sure knew how to hit hard. My poor heart. Don’t want to get too attached to any of these characters as I’m not sure how long they’ll be around for!

Funny at times and forward moving, Demon Road is a solid book, very much worth a read. Derek Landy packs a lot into one novel that is a lot of fun and has left me ready to read the next book to see how Amber and Milo get themselves out of their sticky situation!

Source: Sent for review by Harper Collins Australia (Thank you Holly!)
Format: Paperback
Buy it: Bookworld | The Nile | The Book Depository | Amazon
My Recommendation: For paranormal fans.
Cover: I think this cover is really cool!
Will I read sequel/continue with series: Yes. I'm ready to read more.