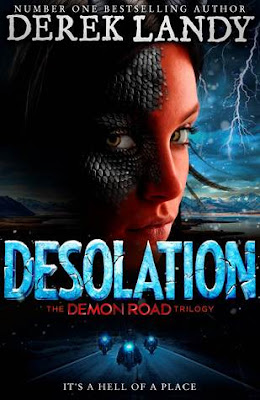 Reeling from their bloody encounter in New York City, Amber and Milo flee north. On their trail are the Hounds of Hell – five demonic bikers who will stop at nothing to drag their quarries back to their unholy master.

Amber and Milo’s only hope lies within Desolation Hill – a small town with a big secret; a town with a darkness to it, where evil seeps through the very floorboards. Until, on one night every year, it spills over onto the streets and all hell breaks loose.

And that night is coming.

Desolation is the second book in Derek Landy’s Demon Road trilogy and is an exciting continuation to the series that I can only hope continues to get better.

Desolation picks up briefly where the first novel left off, with Amber and Milo fleeing the clutches of the Shining Demon Astaroth and heading towards the town of Desolation Hill. Hoping to hide out from Astaroth who sends his Hounds of Hell on their trail, Amber and Milo quickly discover that the polite town of Desolation Hill hides sinister secrets and isn’t the safe haven they hoped.

In all honesty, I’m at a mixed mind when it comes to this novel. Personally, I found the first novel Demon Road to be a really light, entertaining read, and while I could still easily see Desolation in the same manner, there were a few moments where I struggled with the novel at times. And I hated that. I feel like Landy made a few choices with the novel he didn’t need to and as such let the story down…..

Desolation is a quirky mix of light-hearted humor and horror. Blending different supernatural elements together, there’s no doubt Desolation is a fast paced story with a lot of substance. It’s one thing after the other and I never know what the characters are going to face next—something that keeps me guessing and eagerly turning the pages.

Yet as I mentioned, I did have a few issues with the novel. Landy introduces a number of new characters to this installation including a duo of mystery exploring old men, and a group of young people reminiscent of the Scooby gang, complete with dog, who hunt and stop things that go bump in the night. Personally I found the introduction of many of these characters unnecessary and confusing at times. I think Landy could have included maybe one or two of these characters and had a better effect on the story.

I’m also a little bit disappointed by the amount of emphasis Derek Landy has made on Amber’s looks so far in the series. Considering she has self-confidence issues, at first I understood when Landy pointed out the different in Amber’s beauty as a demon as opposed to a human—but it’s become too much now. The amount to times Amber was referenced as being ugly or less than attractive was beyond necessary. Landy could have pointed the issue out and then left it at that, but instead he has gone back to it time and time again. In a time when society is so focused on looks above all else, this was poor on Landy’s part as far as I’m concerned…..

That being said, kudos on Derek Landy for giving Amber a love interest that is outside the box. Amber and Milo’s friendship remains strong, something I enjoy and appreciate within the story. An unlikely team they may appear, Amber and Milo are enjoyable to follow and work well together.

Though I had my issues with this novel, for all its faults for the most part I enjoyed Desolation. There’s something so addictive about all the paranormal Derek Landy has packed together and I look forward to seeing how it all ends when the third and final novel American Monsters is released.

Source: Sent for review by Harper Collins Australia (Thank you Holly!)
Format: Paperback
Buy it: Bookworld | The Nile | The Book Depository | Amazon
My Recommendation: Only if you like light supernatural. Won't be for everyone.
Cover: I think it fits well with the first one.
Will I read sequel/continue with series: Yes. I'd like to know how Amber's story ends.