Having previously enjoyed Amalie Howard's work, I'm happy to have The Fallen Prince on the blog today thanks to InkSlinger PR. The Fallen Prince is the second book in The Riven Chronicles series, with the first book, The Almost Girl sitting pretty on my bookshelf and ready to be read! 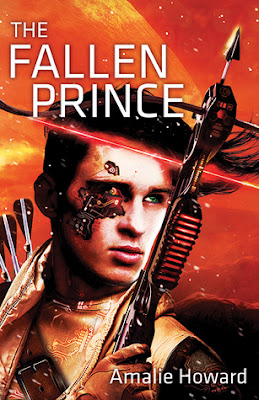 Riven has fought for a hard-won peace in her world, and has come to shaky terms with who and what she is—a human with cyborg DNA. Now that the rightful ruler of Neospes has been reinstated, Riven is on the hunt for her father in the Otherworld to bring him to justice for his crimes against her people.

But when she receives an unwelcome visit from two former allies, she knows that trouble is brewing once again in Neospes. The army has been decimated and there are precious few left to fight this mysterious new threat.

To muster a first line of defense, her people need help from the one person Riven loathes most—her father. But what he wants in return is her complete surrender.

And now Riven must choose: save Neospes or save herself. 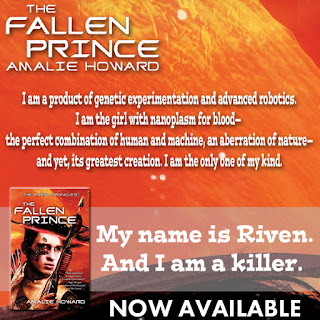 From The Fallen Prince.....

We zoom off in opposite directions and I watch as the ship hovers into stealth mode, mirroring the stone face of the mountain behind it. With my enhanced vision, I can see the slight haze of its outline, but if I didn’t already know it was there, it’d be undetectable. After stashing the bike on the far side of a large boulder, I crouch down and wait. The instrument panel on my wrist says it’s nearly a hundred degrees and climbing, but the suit does its job, wicking moisture away from my body and keeping me cool. I scan the horizon, but there’s nothing but hazy bands of heat flickering through the morning sunlight. I finger the hilts of my ninjatas. Something is off. It’s too quiet.

“See anything?” Bass’s voice buzzes in my ear.

“Weird, right? I mean, you’d think we’d see something. A beetle or a bug, but it’s all gravel.” I glance down at a small round orb and prod it with my toe. It rolls to the side and three gaping holes stare up at me. It’s not gravel. It’s a skull.

Add bones to the list, I think as a similar white sphere catches my attention—this one slightly bigger than the first. Frowning, I squint through the reflection of the sun and kick at the pebbles beneath my feet. A dozen more skulls roll out along with limb bones of all sizes—all picked clean. 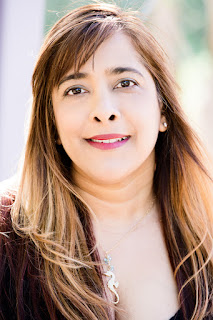 AMALIE HOWARD grew up on a small Caribbean island where she spent most of her childhood with her nose buried in a book or being a tomboy running around barefoot, shimmying up mango trees and dreaming of adventure. 25 countries, surfing with sharks and several tattoos later, she has traded in bungee jumping in China for writing the adventures she imagines instead. She isn't entirely convinced which takes more guts.

She is the award-winning author of several young adult novels critically acclaimed by Kirkus, Publishers Weekly, VOYA, and Booklist, including Waterfell, The Almost Girl, and Alpha Goddess, a Spring 2014 Kid's INDIE NEXT title. Her debut novel, Bloodspell, was a #1 Amazon bestseller, and the sequel, Bloodcraft, was a national silver IPPY medalist. She is also the co-author of the adult historical romance series, THE LORDS OF ESSEX. As an author of color and a proud supporter of diversity in fiction, her articles on multicultural fiction have appeared in The Portland Book Review and on the popular Diversity in YA blog. She currently resides in Colorado with her husband and three children.