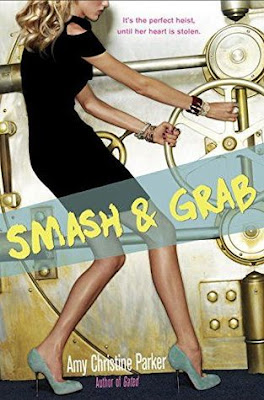 Ocean’s Eleven meets the star-crossed lovers of West Side Story. Grab some popcorn and get ready for an adrenaline-filled heist!

LEXI is a rich girl who loves a good rush. Whether it’s motorcycle racing or BASE jumping off a building in downtown Los Angeles, the only times she feels alive are when she and her friends are executing one of their dares. After her father’s arrest, Lexi doesn’t think twice about going undercover at his bank to steal the evidence that might clear his name. She enlists her hacker brother and her daredevil friends to plan a clever heist.

CHRISTIAN is a boy from the wrong side of the tracks. The local gang has blackmailed him and his friends into robbing banks, and he is desperate for a way out. When the boss promises that one really big job will be the last he ever has to do, Christian jumps at the chance for freedom. In fact, he’s just met a girl at the bank who might even prove useful. . . .

Two heists. One score. The only thing standing in their way is each other.

Smash & Grab by Amy Christine Parker is a fast paced contemporary read that is a delicious blend of Ally Carter’s Heist Society and Simone Elkeles Perfect Chemistry and will thrill you until the very final page.

Wealthy high school student and adrenaline junkie Lexi’s life comes crashing down around her when her banker father is arrested for fraud and her family’s assets are frozen. Setting out to prove her father wasn’t in it alone, Lexi goes undercover as an intern at the bank where he works. With the help of her brother and a close group of friends, Lexi hopes to discover some evidence that might prove that her father wasn't in it alone. Christian is a boy from the wrong side of the tracks, determined to protect his family. Blackmailed and forced to participate in a number of bank heists by the ruling gang in his neighbourhood, Christian is desperate for a way out that doesn’t end in bloodshed. When the gang boss promises freedom in exchange for Christian leading the biggest heist he’s ever conducted, Christian reluctantly agrees. But when a chance encounter between Christian and Lexi ups the stakes, the two teens discover that they may have to combine their individual heists if they have any hope of pulling either heist off……

Smash & Grab is one of those novels you read that is a little unrealistic, but you enjoy nonetheless. Do I really believe a bunch of high school students could infiltrate a bank and then participate in a multi-million dollar robbery? Um, no. But it was really fun to read regardless. If not simply for the entertainment factor and the romance.

Nicely paced and continually picking up speed, Smash & Grab has been well thought out by author Amy Christine Parker. If you’ve ever enjoyed heist tales, Smash & Grab is sure to please. Personally I think Parker put all the elements of the heist together well, and I enjoyed seeing the characters undertake different roles to bring things together. Ultimately when the heist is carried out is the most exciting part of the novel, but Parker still managed to keep me entertained with the connection between Lexi and Christian and all the developments that see the heist set up.

I enjoyed the basic rich girl/boy from the wrong side of the tracks element Parker adds into the story. Throw in the fact that Christian really is a good guy just wanting to take care of his family, and this Mexican bank robber quickly won me over.

Easy to read and definitely worth the time, Smash & Grab will bring a smile to your face as two teens from opposite sides of the spectrum attempt to pull of different heists. What starts out as a way to get what they want by using the other turns into an endearing romance that will leave you satisfied with its ending.

Source: Received for review via Netgalley from Random House Books
Format: Kindle ebook
Buy it: Bookworld | Barnes & Noble | The Book Depository | Amazon | Kobo
My Recommendation: Perfect Chemistry and Heist Society fans will love.
Cover: This cover is awesome. Love the colors and the model's stance--it's fierce.
Will I read sequel/continue with series: This is a standalone novel but I'd read more by Amy Christine Parker in the future.