Today Australian author Michael Adams stops by the blog for a chat about his latest release, The Last Shot, the second book in this Last Trilogy! Thanks to Allen & Unwin, I'm happy to have Michael here talking about The Last Shot and even letting us in on some things you may not have previously known about the man behind the author!

Hi Michael! First off, congrats on the recent release of The Last Shot, the second book in your The Last Trilogy. I’m sure this is a very exciting time for you right now, so I’m thrilled you would take the time to answer of my questions!
Thanks, Rachel.

I’ll jump straight into it…..

Having read The Last Shot I can say it’s a worthy follow up to the first book, but for those who haven’t read it, what’s the biggest difference this time round?
The Last Girl was apocalyptic. We saw the world unravel from the effects of a global telepathic outbreak. Danby had to learn to survive and figure out who she can trust among her fellow survivors. The Last Shot is moving us towards post-apocalypse. There are still thousands – maybe tens of thousands – of people who can be saved but there’s no way Sydney and its suburbs are going to be magically restored to their former glory. Danby’s also faced with the ultimate question: is she capable of killing to go on living? She has to become even tougher. But what’s the point of saving your life if you lose your soul in the process? Danby’s looking for light in some dark places.

Do you think it’s easier for you now, having the first book under your belt? Has your writing process changed much?
The first draft of The Last Shot was faster to write because I’d established Danby’s character and the nature of her world in The Last Girl. But the revisions and polishes still took a long time because, in every paragraph and on every page, there’s always stuff you can make better and richer. My writing process is essentially still the same – the first rule is: always try to find time to do it in the midst of family and work commitments. What was different was that The Last Shot was plotted out more extensively in advance while The Last Girl was pretty much make-it-up-as-you-go.

As a Sydneysider, I love the fact that The Last Trilogy is set pretty much in my own backyard, but I have you ask….did you ever consider setting the book anywhere else? I know some Aussie authors who’ve chosen to write stories set in the States rather than their native country. Is this something you ever thought of pursuing?
I actually had the initial idea – global telepathic outbreak – back in 2008 while I was in New York for my non-fiction book Showgirls, Teen Wolves And Astro Zombies. In the few days after that telepathic light-bulb moment, I tried to envisage how it might play if it happened in Manhattan. I was walking around the Museum Of Natural History, imagining a security guard who’s immune and who’s holed up over Christmas while outside millions of people go crazy.

It was what actually made me put the idea on the backburner: I figured if it happened in New York City no-one would survive because there’d be too many people, too few places to flee, too many guns in houses and too many nuclear reactors in surrounding states. But a few years later when I picked it up again, setting the story in Sydney and the surrounding regions made sense. It might really be feasible to survive here because there’s a relatively small population near big and empty landscapes. It’s also fun writing about places you know and reimagining them in a new light. On a practical level, there was another reason for setting it in Sydney: I feared someone else would write a book with a similar premise and I figured it’d at least set my story apart if it took place in Australia.

Danby is very much the normal Australian teenager. Is she modeled after anyone who know, or just a complete figment of your imagination?
Danby is a bit me as a teenager. She’s a bit of the girls I used to hang with at high school and university. But she’s mostly made up. I just tried to write someone who’s believable. Smart but not a genius. Funny but not stand-up comedian. Wise but not beyond her years. Brave but not a ready-made warrior. Romantic but not swooning. Valiant but vulnerable.  She’s got a lot of the strengths and weaknesses we have as people. But she must accentuate the former if she’s to survive. It’s a steep learning curve, especially when a mistake could mean death.

Describe Danby in five words.
My daughter in eight years. (minus the apocalypse)

Ha! Minus the apocalypse....we should hope so! What’s your favourite line from the book?
The final sentence. It takes Danby to the next level. Sets her up for the third book: her ultimate challenge.

Let’s take a little look at the author behind the book, what's something your readers might be surprised to learn about you?
In 2010, my partner Clare, daughter Ava and I were selected from 160 applicants all over the world to be Australia’s first Smart Home Family, living rent-free in a state-of-the-art house that was designed for energy efficiency. Our job was to test the various gadgets that’d reduce electricity consumption, blog about the experience and host tours of interested Aussies and visitors from overseas.

We were the first family to have an iMiev all-electric car. If there were history books for such things, we’d be recorded as the first people in Australia to ever run out of battery while halfway up the Blue Mountains. When that happens, you need to get a tow-truck because it’s not like you can just pop a couple of AA batteries under the bonnet and keep going. Unfortunately, a lot of the house technology didn’t work half the time so it was a strange experience and one that might’ve been better environmentally integrated. But it was interesting, inspired some hope for the future and gave us the chance to save a deposit for our house in the Blue Mountains. And, as the Smart Home was located in the former Olympic Village, it provided a new area for me explore. Upscale planned suburbs like Breakfast Point, the Parramatta River, Newington Nature Reserve: they all became integral parts of The Last Girl, which I started writing during that time.

Was writing always something you wanted to do? Or a spur of the moment career choice?
For as long as I can remember. I used to write and illustrate little books when I was about six. Ridiculous action stories about soldiers fighting robots and sharks and dinosaurs. The sort of stuff that… we now see on movie screens, made on $200m budgets by Michael Bay.

If you could meet anyone alive or dead, real or fiction, who would you want to meet and why?
Danby, of course. That’d be a head-trip. I’d have to apologise for making things so tough on her.

Now, I'm not going to give away any spoilers, but The Last Shot ends on a pretty surprising cliffhanger---any hints as to what we can expect in the third and final book?
Danby’s going to a place I don’t think we’ve seen from YA heroines before. The sort of place we don’t often see female fictional characters go at all. The sort of place that Walter White went in Breaking Bad – or that Marlow went in Heart Of Darkness. I think it’s interesting that the violent dark night of the soul is almost always a journey made by men. This time it’s a girl. Can Danby live with the person she’s had to become to live through the end of the world? Can she find The Last Place? A physical, emotional, mental and spiritual refuge? We’ll see…

6 Quick Questions:
1. Day or Night? Saturday late morning.
2. Book or Movie? Book! No, movie! No, book! Depends on what it is. Maybe it’s TV. True Detective’s been my latest obsession. It feels like a dense book. Or a very long and very great movie. Sorry, now I’m rambling. Next!
3. Favourite Colour? Black.
4. Favourite Food? Green chicken curry.
5. Lucky Number? However many copies The Last trilogies sells will be lucky.
6. Cake or Ice Cream? Ice-cream.

Thanks again for chatting with me today Michael! I can't wait for the release of the The Last Place next year :)
Thanks, Rachel. It’s been fun. Appreciate the support!

Michael Adams has been a restaurant dishwasher, television host, ice-cream scooper, toilet scrubber, magazine journalist, ecohouse lab rat, film reviewer, social media curator, telemarketing jerk, reality TV scribe and B-movie zombie. This one time, he watched bad movies at the rate of one per day for an entire year and wrote a book about the traumatic experience, which is called Showgirls, Teen Wolves and Astro Zombies. Michael lives in the Blue Mountains, NSW, with his partner, daughter, one dog, two cats and an average of three supersized spiders. The Last Girl is his first novel. 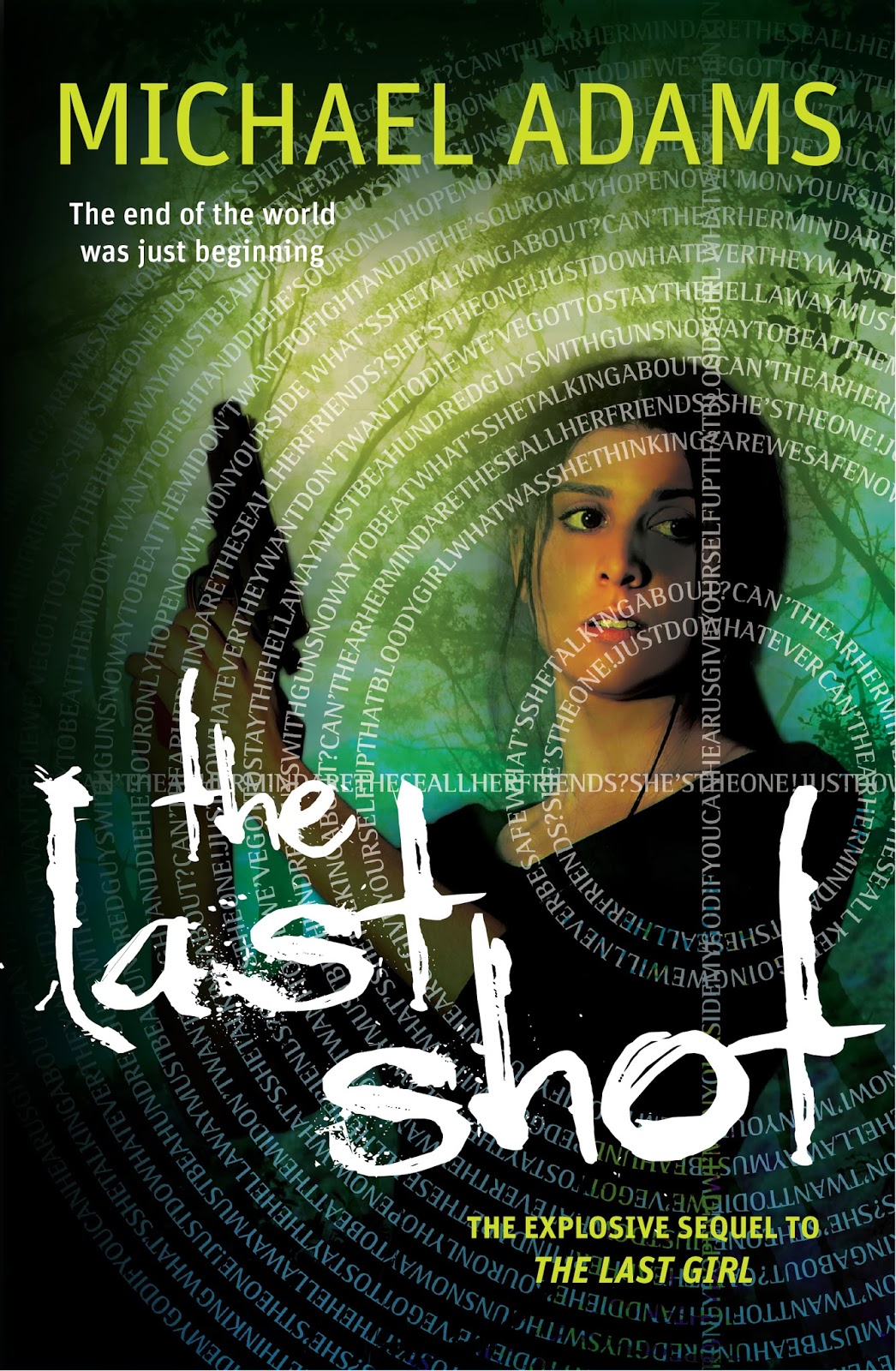 I glance at my fellow fugitives in the glow of the fire: black-streaked, white-eyed, faces fearful but fierce. Whoever any of us were a week ago, we've now become people we could never have imagined.

After facing the heartbreaking truth in Shadow Valley, Danby is determined to have her revenge on Jack.

With Jack dead, her little brother Evan and hundreds of other Minions will be free of his control. With Jack dead, she and her friend Nathan will be able to revive thousands more from the millions of catatonic Goners.

But what if she's wrong - about everything?

After Danby confronts Jack on a dying stretch of highway, all of her beliefs are turned inside out. Not only are his feelings for her real, he's working against the clock to save lives and rebuild society. To Danby's horror, it's Nathan who appears to threaten the new order.

With her emotions raging and blood on her hands, Danby has to take a side in a deadly battle that'll decide the future of the world. And as allies become enemies and foes turn into friends, she'll have to embrace methods so dark that the price of survival may be her very soul ...

Published by Allen & Unwin, The Last Shot is out now and available online and from all good bookshops! Be sure to pick up your copy, or if you haven't read the first book The Last Girl, be sure to do so before the third and final book, The Last Place releases next year!