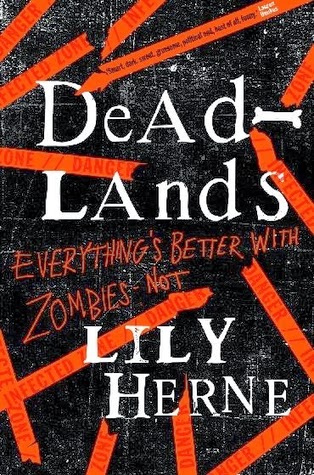 In Deadlands, life is a lottery.

Ten years have passed since Cape Town was destroyed in the war with the living dead. Now, human survivors are protected from the zombies that lurch around the suburban Deadlands by shrouded figures known as 'Guardians'. But the price for protection is steep: each year, the Guardians hold a human lottery in which five teenagers are chosen for a secret purpose.

Seventeen-year-old Lele hates everything about her life in the city: her new school, the brainwashed zombie-lovers, the way everyone seems creepily obsessed with teenagers . . . She wants out. Then she is picked as a Chosen One: but she's not prepared to face whatever shady future the Guardians have in store for her. So she runs for her life - straight into the Deadlands, and into the ranks of the Mall Rats - a renegade gang of misfit teens who have gone underground - and are preparing to take a stand.

Deadlands by Lily Herne is a unique and unusual dystopian read with a fresh and different twist on the walking dead. While this book may not be for everyone, Herne has certainly won me over with her heroine’s unique and riveting story!

In all honesty, I don’t know quite what I expected this book to be about when I began it, but whatever that was, Deadlands turned out to be the furthest thing from. And yet, strangely, I really enjoyed this book. Lily Herne has penned a really unique apocalyptic tale.

Set in an alternate Cape Town, the setting of this story was something very different from what I’ve read before. I have to give Herne props for exploring a non-traditional dystopian setting in Deadlands. It gave her the ability to create something we hadn’t seen a million times. Herne blends traditional South African elements together with a society destroyed and ravaged by a mysterious plague that reanimates the dead well. I liked her unique twist on zombies and found it very entertaining trying to piece certain things together.

I will say I struggled in the very beginning of this book. As someone not overly familiar with South African culture, the slang and idealisms threw me, as well as the pronunciation of some of the names throughout the story. However after the initial first chapters, I found myself easily getting lost in the story as I adjusted to the setting. This book is actually a quick read (it only took me two days) and I enjoyed seeing the almost primitive society Herne has woven together with modern apocalyptic elements.

Following main character Leletia de la Fontein, aka Lele, Deadlands introduces us to a society where zombies are everywhere and the worlds population survive in enclaves, protected by Guardians, mysterious individuals whose motives are a secret, especially from those they “protect”. This is quite an interesting concept to see. After a war against the zombies that saw multiple deaths, the Guardian’s arrived to create enclaves for ordinary people to live in. These enclaves are primitive, without basics like electricity, but almost everyone, bar some rebel forces, accept this. There’s no questioning the Guardians and an almost cult like reverence for these unknown people/beings is widely practiced.

There is a great bunch of characters in the story. Our heroine Lele is stubborn and opinionated and loves her brother fiercely. Considering her overall situation, I liked her and found her easy to follow within the story. All the other characters were very different, and each plays a role in Lele’s tale but none are more important than the Mall Rats, a bunch of teenagers who manage to escape from and then back into the enclave all so to acquire certain every day items that are now a luxury to the people in this story. Saint, Ash and Ginger are intriguing friends to Lele, but they too have secrets—something I enjoyed learning of.

Herne does a good job keeping the story driving forward while dropping little hints here and there about the overall plotline in Deadlands. The final few chapters of Deadlands are very shocking; the ending exciting. So many of Lily Herne’s hints and mystery’s suddenly make sense and you can’t help but feel invigorated by this discovery.

Featuring a surprising but exciting ending, Deadlands leaves me ready to pick up the next book as soon as I can get my hands on it!

Source: I bought
Format: Paperback
Buy it: Bookworld | The Nile | The Book Depository | Amazon
My Recommendation: Unique, raw and different; if you want a different dystopian/zombie tale then this gritty story is just what you need.
Cover: I think it's awesome--loving the design.
Will I read sequel/continue with series: Yes