Book Shelf: A Breath of Frost (The Lovegrove Legacy #1) by Alyxandra Harvey 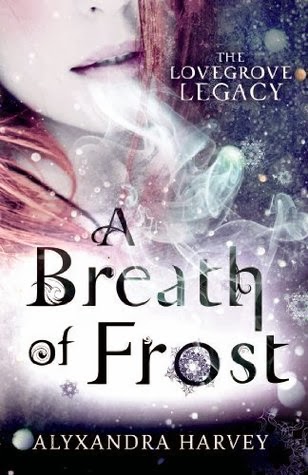 In 1814, three cousins—Gretchen, Emma, and Penelope—discover their family lineage of witchcraft when a binding spell is broken, allowing their individual magical powers to manifest. Now, beyond the manicured gardens and ballrooms of Regency London, an alluring underworld available only to those with power is revealed to the cousins. By claiming their power, the three cousins have accidentally opened the gates to the underworld.

Now ghouls, hellhounds—and most terrifying of all, the spirits of dark witches known as the Greymalkin Sisters—are hunting and killing young debutante witches for their powers. And, somehow, Emma is connected to the murders…because she keeps finding the bodies.

Can the cousins seal the gates before another witch is killed…or even worse, before their new gifts are stripped away?

A Breath of Frost is a gloriously detailed tale by Alyxandra Harvey that follows the journey of three cousins and their discovery of their magical heritage and is a story filled with eloquent balls, startling magic and forbidden romance. Prepare to be swept up in Regency London with this thrilling novel!

At this point in time I'm a studious Alyxandra Harvey fan, having read numerous books of hers and quite enjoying every one, but I have to say that A Breath of Frost could unexpectedly be my new favourite! Now, ordinarily I'm not a real reader of historical novels. I admit I have read a few, some I even quite enjoyed, but normally I'm not the biggest fan of them unless they're written right. In my eyes, A Breath of Frost was written right.

Following cousins Emma, Gretchen and Penelope, A Breath of Frost details the girls discovery of their witch heritage, something they were very much unaware of and yet something almost everyone around them seems to have known of, and have been a part of. Though the story is told predominately through the eyes of Emma, we're also allowed into the minds of Gretchen and Penelope at times, as well as a few other characters we meet along the way including an evasive and mysterious love interest for one of the girls and a rebellious and capable young woman from the other side of the tracks.

A Breath of Frost is perfectly detailed and wonderfully written. Harvey perfectly depicts life in high society London during the 19th century and the life that accompanies it together with the powerful and sometimes shady world of witchcraft and magic she has created within A Breath of Frost. Generous balls and dashing suitors give way to unpredictable magic and murder as Harvey weaves together a mysterious storyline that not only sees cousins Emma, Gretchen and Penelope discovering who they really are, but has them hot on the trail of a killer as their family history collides with their present. Secrets are revealed and danger arises as the girls struggle to master their abilities and stumble their way through the world they're now a part of while finding a way to prove one of them is not a murderer.

Even though I've already pointed out I'm not the biggest fans of historicals, I thoroughly enjoyed this novel. Emma, Gretchen and Penelope are fantastic to follow and the story really is captivating to read. Harvey mixes forbidden romance in a scandalous society together with magic and mystery to create a story I was very much addicted to. I found myself eagerly turning pages, lost to one thing after the other.

I liked the fact that Emma, Gretchen and Penelope are all very different individuals, although they do share a pertinent for snubbing society life. Each girl has her own personality and they compliment each other well. They're blood, but they're also friends and this comes across very well within the novel. As we follow Emma for the larger part of the book, I do feel that we got to know her better than Gretchen and Penelope, although from the small glimpses into their hearts and minds, I hope to explore them more as the series progresses.

Whilst the majority of the novel stems over the girls discovering their magical heritage and the murderer at large, Harvey also expertly weaves some forbidden romance into the story. Emma's romance with a charming and often infuriating Order member will satisfy readers, and I'm personally looking forward to Gretchen and Penelope discovering their certain someone's too. Personally I have a feeling I know who Penelope with end up with, but Gretchen is still a mystery to me, although I do have my hopes to who I'd want her paired with!

Harvey introduces a number of different minor characters to the story, often who are more than they seem, but who you know will have an impact on future storylines. The danger that encompasses the story will thrill readers when Emma's true heritage is revealed and as Harvey brings this chapeter in the story to a exciting end, I for one cannot wait for the next installment in the series.

Daring, exciting and darkly magical, A Breath of Frost is a perfect start to Alyxandra Harvey's new Lovegrove Legacy and is sure to leave you wanting more!

Source: Sent for review by Bloomsbury Australia (Thank you guys!)
Format: Paperback
Buy it: Bookworld | The Nile | The Book Depository | Amazon
My Recommendation: Fans of Libba Bray and historicals with a magical twist will want to grab a copy of this!
Cover: It's pretty, but could have been better
Will I read sequel/continue with series: Yes!