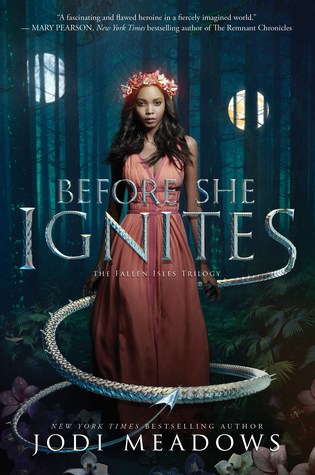 Before She Ignites by Jodi Meadows
Releases on: September 26th 2017
Add on Goodreads!
Before

Mira Minkoba is the Hopebearer. Since the day she was born, she’s been told she’s special. Important. Perfect. She’s known across the Fallen Isles not just for her beauty, but for the Mira Treaty named after her, a peace agreement which united the seven islands against their enemies on the mainland.

But Mira has never felt as perfect as everyone says. She counts compulsively. She struggles with crippling anxiety. And she’s far too interested in dragons for a girl of her station.

Then Mira discovers an explosive secret that challenges everything she and the Treaty stand for. Betrayed by the very people she spent her life serving, Mira is sentenced to the Pit–the deadliest prison in the Fallen Isles. There, a cruel guard would do anything to discover the secret she would die to protect.

No longer beholden to those who betrayed her, Mira must learn to survive on her own and unearth the dark truths about the Fallen Isles–and herself–before her very world begins to collapse.

Jodi Meadows’s new Fallen Isles series blazes with endangered magic, slow-burn romance, and inner fire.
Thoughts:
Alright, so I'm going to be honest and say that vainly, the first thing that caught my attention about this book was it's cover. I mean, come on?!? It's gorgeous! But damn does the description sound good too. I haven't had a chance to read anything by Jodi Meadows yet, but Before She Ignites may just change all that!
What do you think of Before She Ignites?
And what are you waiting on this week?