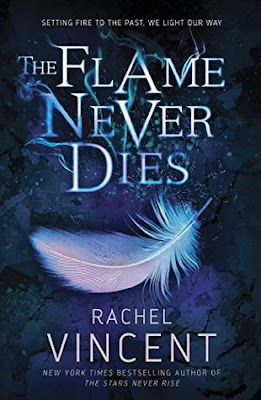 Nina Kane was born to be an exorcist. And since uncovering the horrifying truth-that the war against demons is far from over-seventeen-year-old Nina and her pregnant sister, Mellie, have been on the run, incinerating the remains of the demon horde as they go.

In the badlands, Nina, Mellie, and Finn, the fugitive and rogue exorcist who saved her life, find allies in a group of freedom fighters. They also face a new threat: Pandemonia, a city full of demons. But this fresh new hell is the least of Nina's worries. The well of souls ran dry more than a century ago, drained by the demons secretly living among humans, and without a donor soul, Mellie's child will die within hours of its birth. Nina isn't about to let that happen ...even if it means she has to make the ultimate sacrifice.

The Flame Never Dies is the gripping second novel in Rachel Vincent’s Well of Souls series and follows on diligently where the last book left off, once more drawing readers into a dangerous demonic world.

Nina Kane and her pregnant sister Mellie have been on the run since they discovered the shocking truth that the war against demons is far from over, and that the Unified Church members are all possessed by demons themselves. Alongside Finn and the other fugitive exorcists, Nina and her sister have been travelling the badlands as Nina learns about her abilities as an exorcist and plans the arrival of Mellie’s baby. The rogue exorcists have enough dangers to face without the added threat of Pandemonia; a city inhabited completely by demons whose leader will stop at nothing to locate Nina and her friends. With time running out to find a soul for Mellie’s baby and with the dangers growing, will Nina have to make the ultimate sacrifice to ensure the baby lives?

Picking up approximately five months after the last novel left off, The Flame Never Dies details the latest stage in Nina’s life as she and the other exorcists train and continue to exorcise demons as they travel across the badlands. Rachel Vincent continues to keep her readers entertained with this sequel and ups the ante as Nina and her friends face a new brand of demon and a new danger.

There’s a lot of emotion in this novel, with loss inevitable at times and Rachel Vincent keeps readers following along with action, danger and excitement always present. Personally, I’ve really enjoyed following Nina and the exorcists and think they’ve been really intriguing to get to know and follow.

I have to say though, I found the ending a little anti-climatic for the final novel in this duology. Don’t get me wrong; a lot of things were left well, and very hopeful, but I didn’t feel the closure I was hoping for if The Flame Never Dies is the last book in this series. I want more. There’s so much I still want to witness and so many characters I still yearn to learn about. Vincent only allowed us a glimpse of so much within this world—I want more.

I want to get to know Devi and Maddox, see what happens to Grayson now that she’s transitioned, discover how Finn adjusts to his new body, what happens to baby Adam, whether Eli and Ana become a couple, and what happens to the Lord’s Army. Whether Rachel Vincent plans a spin-off or any more tales in this world is unknown to me, but I think it will be a real shame if she doesn’t…..

Overall I enjoyed The Flame Never Dies. I’m not necessarily ready to bid this series goodbye, but I did think this was a solid read. Definitely perfect for those who love their dystopian tales with a hint of a demonic influence.

Source: Sent for review by publisher (Thank you Vanessa!)
Publisher: HarlequinTEEN Australia
Format: Paperback
Australian RRP: $19.99
Release Date: February 2017
Purchase: Bookworld | Booktopia | The Book Depository | Amazon
Final Thoughts: The duology doesn't seem complete. While I enjoyed this final book, I don't think it should BE the final book. Rachel Vincent could definitely write more and I don't know if I'm completely satisfied with this being the ending.....